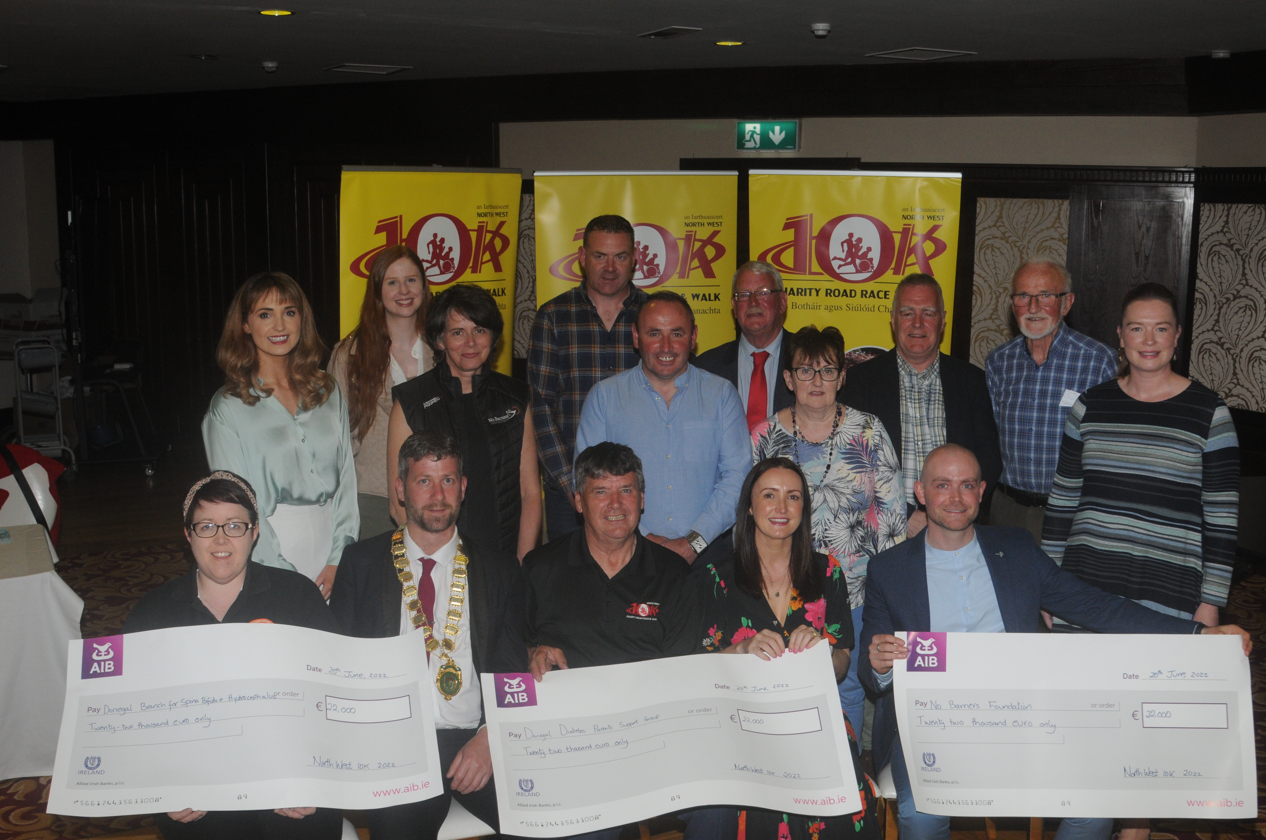 North West 10k Chairperson Neil Martin said that it was fantastic to be able to present €22,000 each to three worthy causes in the Donegal Branch of Spina Bifida & Hydrocephalus Ireland, the Donegal Diabetes Parents Support Group and the No Barriers Foundation.

He paid tribute to all the committees who had given sterling service to the North West 10k since the first event was held on the 10th of May 1997 in Letterkenny.

“I want to acknowledge the work of all the committees since 1997 under the Chairpersons Charlie Kelly, Grace Boyle, James Boyle and myself for the past six years,” he said. 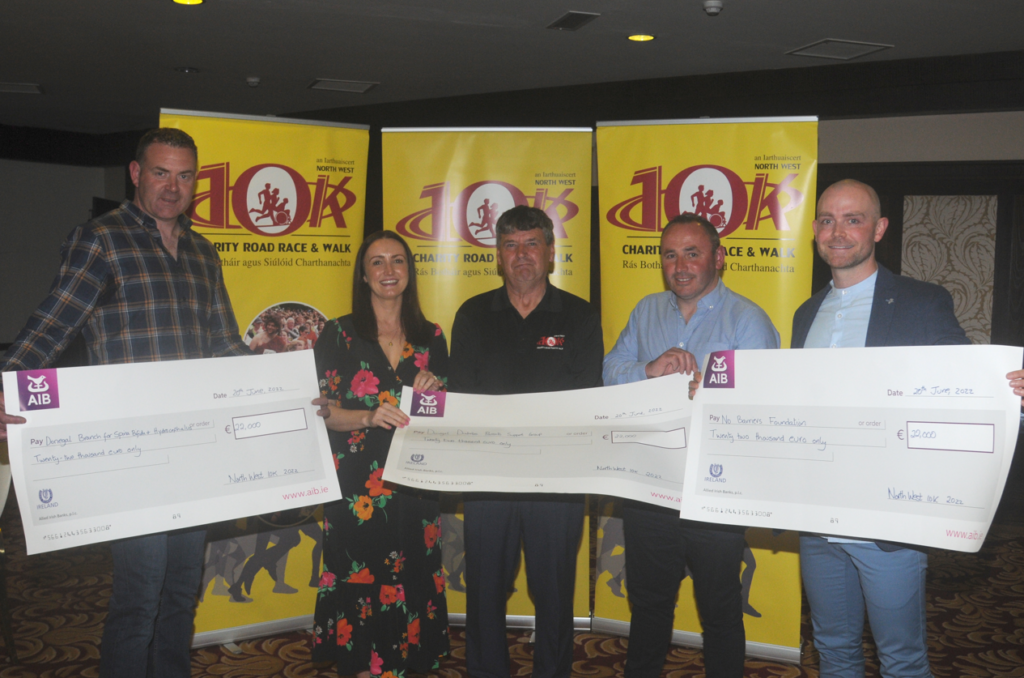 He also thanked all the sponsors who have supported the North West 10k over the years.

“We are very grateful to have five sponsors this year again in Donegal Daily, Brian McCormick InterSport, Century Cinemas, the Mount Errigal Hotel and the Value Centre.

“The Council and the Letterkenny Chamber have been great supporters of what we do and I know that will continue going forward.

“The Letterkenny Community Centre has been the hub for all 25 charity runs and walks so we are indebted to Liam O’Donnell and his team for their assistance.” 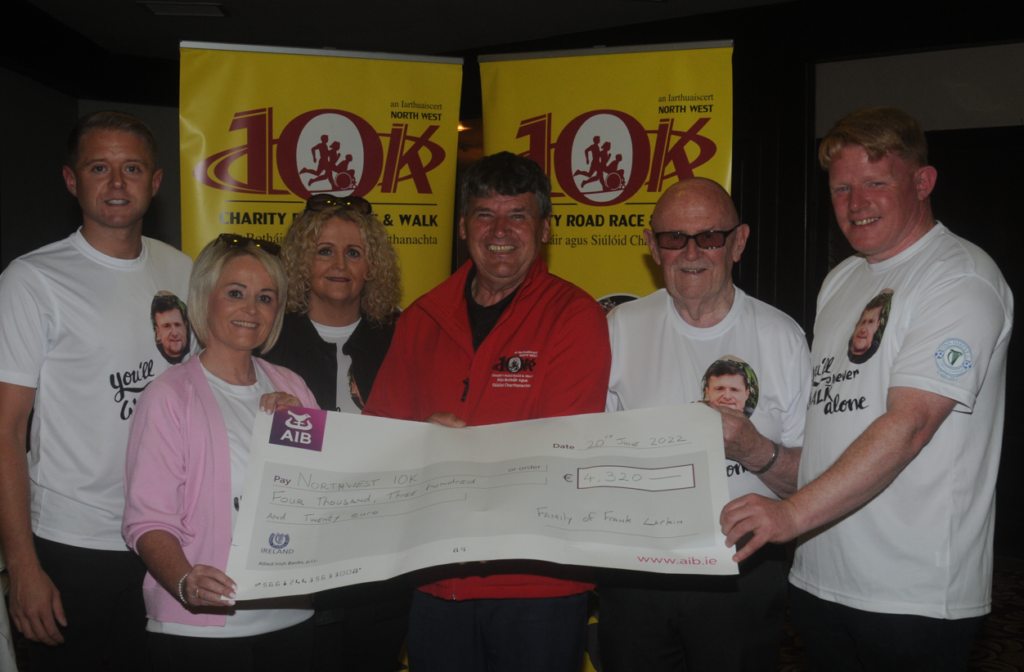 On behalf of the Donegal branch of Spina Bifida & Hydrocephalus Ireland, Jonny Stewart said the proceeds would be used for family respite care, travel to hospital appointments and the provision of extra equipment aids where necessary.

Representing the No Barriers Foundation, Marina Kennedy-Quick said the €22,000 would help complete the funding to purchase a second Exoskeletal Suit.

This, she said, would enhance their growing demand for the specialist neurological equipment that allows anyone with a disability to train and improve their current level of physical and mental health by targeting mobility, strength and physical fitness regardless of their current baseline. 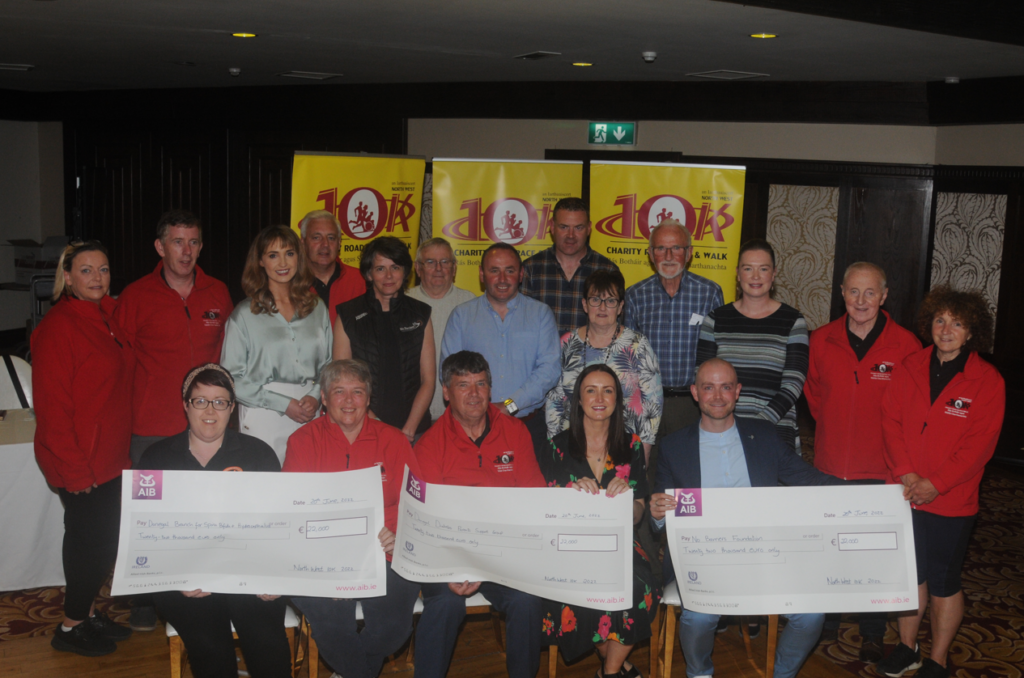 Neil Martin said that every year the North West 10k is first and foremost about the charities and that the recipients are very worthy of the donations.

“They have worked very hard together on a range of additional fundraising initiatives that have substantially boosted the money raised on the actual day of the North West 10k.”

The presentation of donations took place in the Errigal Hotel, the same place where the North West 10k committee was formed in the winter of 1996.

The 25th anniversary of the run and walk took place on Monday the 2nd of May, the first time for it to take place on a Monday, and was attended by the new Mayor of Letterkenny, Cllr. Donal Kelly and fellow Councillors Donal Coyle and Jimmy Kavanagh.

To mark the anniversary, the committee has put together a commemorative booklet that charts a series of standout moments along with significant statistics and images from 1997 to the present day.

On the day of the 10k, there was a souvenir t-shirt and medallion given to everyone that participated.

Neil Martin also thanked the committee, stewards and marshals, the Gardaí and Sergeant Eunan Walsh and the Red Cross for all their voluntary effort on the day.