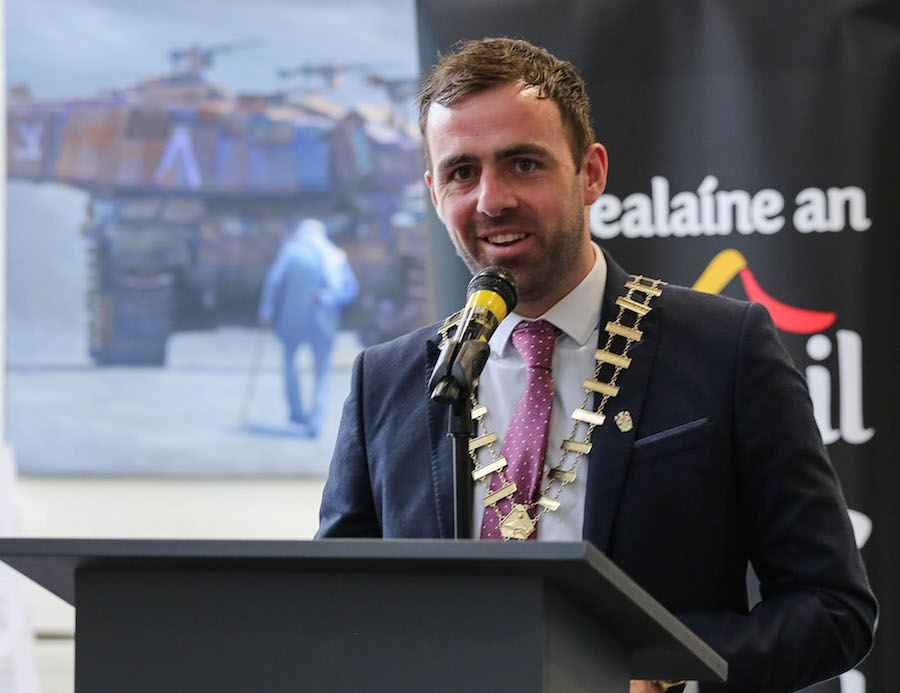 Outgoing Cathaoirleach of Donegal County Council, Councillor Jack Murray has been through a turbulent time over the past year. Murray is preparing to relinquish his chain of office and speaks about the impact the year has had on himself and his family.

As Cathaoirleach Jack Murray’s term comes to an end, he recounts his fondest memories, personal struggles and political accomplishments from his year as Donegal’s First Citizen.

Councillor Murray was first elected in June last year and will relinquish his chain when the council selects a new Cathaoirleach on Monday, June 27, with Cllr Liam Blaney, of Letterkenny, in pole position to assume the role through June 2023.

He was the third consecutive Mayor of Donegal to come from Inishowen, after Cllr Nicholas Crossan in 2020 and Cllr Rena Donaghey in 2021.

Cllr Murray said he gained a lot from the last twelve months.

“I’ve learned that I can survive on a lot less sleep than I thought I needed! More importantly, I’ve gained a greater insight into the huge amount of work being done by community groups in every corner of Donegal.”

“I’ve also learned more about the importance of putting political differences aside in order to achieve for the people of the county. Throughout my year I was constantly in contact with councillors of all parties and groupings.”

“Without that positive relationship, and the support I received from others, there is much that wouldn’t have been achieved,” he told the Inishowen Independent.

When Cllr Murray, who is now 37, was elected as Cathaoirleach his goals were to get Swan Park reopened, help businesses recover post-covid, see work on Buncrana Leisure speed up, achieve funding to develop Buncrana Pier, and at the top of the agenda was to address the mica scandal.

There has been some progress on all these fronts but Cllr Murray is still not entirely satisfied with his accomplishments.

“I don’t think any Cathaoirleach could honestly claim to have achieved everything they set out to at the start of the year. Twelve months is an extremely short term to try and address every issue in such a large county.”

“That said however, I am happy with the work that I have done and know that I gave absolutely everything I had to the role. I gave a commitment to make the defective block/mica crisis a central focus of my term and I did that. For the first time, our council had stand-alone and publicly broadcast meetings on the issue.”

“Along with leading mica campaigners and Leas-Cathaoirleach, Martin McDermott, I also met with the Housing Agency, Dept of Housing and others to fight for affected homeowners and secure a proper 100 per cent scheme for all.”

“Similarly, I was proud to address the massive crowd of protesters in Dublin last October, wearing the Cathaoirleach’s chain, to state publicly that the campaign had the backing of all Donegal people and to join them in sending a resounding message to government.”

Mayor Murray said he was also “very proud” to sign off on the funding application for the Repowering Buncrana project and then present the vision to the local community at a packed event in the Inishowen Gateway Hotel.

“This would represent the single largest amount of public investment into Buncrana ever, and with that prioritised alongside our new Leisure Centre, it would make a huge difference to the lives of people locally. I am proud to have played a part, through my year as Cathaoirleach, in moving it forward,” he added.

The position of County Mayor requires a lot of travelling, mostly around the county, sometimes further afield. This was bittersweet for Cllr Murray.

Spending time away from his family was difficult for him, but the highlight of his term was in Dublin, when he addressed protesters who gathered in opposition to the government’s half-baked scheme to address the mica crisis.

He was also “honoured” to represent Donegal on his travels.

Cllr Murray credits his supportive family as the reason his domestic life wasn’t too hindered by his Donegal duties.

“It’s never fully recognised how much the role can take its toll on your family but I’m very fortunate that my wife, Sabrina, fully weighed in behind me and helped me through it.”

“Likewise, my parents, sisters and my in-laws were always available to look after our daughter when needed. I’ll always, be very, very grateful for that. It wasn’t easy to spend so much time away from home.”

“Without being surrounded by such a supportive family, I simply couldn’t have done it.”

The day he spoke in Dublin will be a tough moment to top for the incoming Cathaoirleach.
Tens of thousands of people gathered in the capital to march from the Garden of Remembrance to Custom House and demand 100 per cent redress for mica-affected homeowners.

“Speaking at the mica protest in Dublin and witnessing such a powerful uprising from the people of Donegal was hugely uplifting and made me very proud to have been First Citizen of the county,” he said.

Cllr Murray said his personal highlight from a “selfish point of view” though was when he played in the Irish Legends Pro-Am golf tournament with former Dublin manager, Jim Gavin, and South African pro-golfer, James Kingston.

Cllr Murray’s tenure was marred by a few, well publicised, incidents; clashes between himself and Cllr Frank McBrearty after Cllr Murray said he would examine allegations of bullying against Cllr McBrearty.

Gardai were called to two council meetings “due to safety concerns from staff and elected members.”

“They were challenging times that I don’t think any Cathaoirleach would have expected.”

“Thankfully though, I was able to rely on support from across the political spectrum, from those who wanted to see elected representatives get our business done, and we collectively got through it,” Cllr Murray said.

Chairing council meetings during this difficult period was “horrible” according to Cllr Murray and is one of the few things about the job that he won’t miss.

Another part of the job he’s happy to leave is being away from his wife Sabrina and their three-year-old daughter Bláithín. He said being apart from them was difficult but “part of the package”.

“I remain very grateful for having been given the opportunity. As I look back, I wouldn’t change it,” he said.

Cllr Murray is now looking forward to taking a short break and spending time with his family before getting stuck back into life as a local councillor for Inishowen “without being pulled around the county”.

When Cllr Murray hands over his chain, he will most likely be handing it to Fianna Fail Cllr Liam Blaney.

Cllr Blaney has been serving as a councillor for 19 years; he said if the opportunity arose to spend year 20 as Cathaoirleach he would give it “plenty of thought.”

“I’ve no doubt that Liam will do an excellent job as Cathaoirleach and is well fit for the job. He has a huge amount of political experience and will take to the role with ease.”

“I’ve spoken to him many times as he prepares for the role and he can be assured of my total support. I’ll always be available to offer any advice he may need based on my own experience,” Cllr Murray said.

His advice for Cllr Blaney is: “Don’t take anything personally. Don’t take the job home. Take stock from friends, family and from across the political divide. Most importantly, enjoy every second of it, as it’s a once in a lifetime honour.”

For a brief moment Derry and Donegal both had mayors who hailed from Burnfoot when Sinn Fein Cllr Sandra Duffy became mayor of Derry earlier this month.

Cllr Duffy has been a close friend of Cllr Murray’s for a long time, long before each of them became councillors.

Cllr Murray was present when Cllr Duffy was elected as Mayor. He said he was “delighted to see her take on the role” and reiterated the importance of Derry and Donegal’s important relationship but “there was no need, as she fully understands that already”.

‘I can survive on a lot less sleep’ – Cathaoirleach Murray on past year was last modified: June 22nd, 2022 by Staff Writer
Facebook0Tweet0LinkedIn0Print0