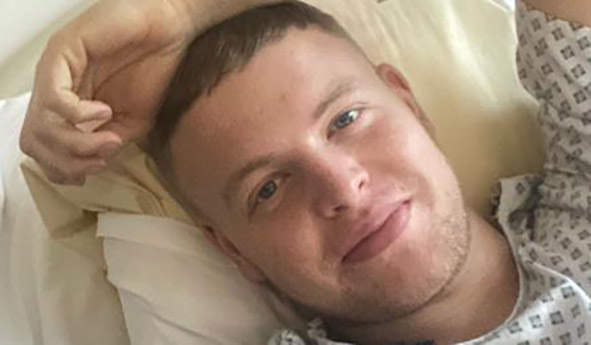 Fund for man after life-changing injuries in motorcross accident

A GoFundMe Page has been set up for a young Ramelton man who sustained life-changing injuries in a motorcross race.

Ben McGarvey’s world changed forever on May 8th following the accident at the event in Letterkenny.

The talented 20-year-old has already undergone major surgery on six occasions in Galway University Hospital to repair broken ankles and horrific injuries to his feet.

However, he does not have a medical card or health insurance and his family has no idea of what is ahead of them in terms of financial costs but they will be considerable.

Having undergone six surgery procedures in six weeks, Ben is scheduled to have further surgery this weekend.

His parents, Mark and Carole say that there is no a timeframe for his hospitalisation but they are preparing for when their son will come home to Ramelton.

Adapting the house, making it wheelchair accessible, putting in a wet room are just some of the things that they have already started doing.

The family badly needs financial support so Carole has set up a GoFundMe Page.

Dad Mark says they have no idea in reality of what is ahead of them in terms of financial costs but they will be considerable.

Mark and Carole were at the motto-cross race meeting when the accident happened.

“Ben was thrown high from the bike and landed on his two feet on the track which took the full impact. If he had fallen on his back he would have been paralysed and if it was his head Mark said his son could have died.

“I did not see it happening but I saw the red flag signalling that there was an accident. I was kept from getting to him because the sight of the injuries were so severe to his two ankles.

“Carole was first on scene. We knew right away that they were broken. The Red Cross Ambulance was there. They had to get him ready before he could be taken to the hospital,” Mark said.

Ben’s parents were told very quickly at Letterkenny University’s Hospital’s Emergency Department that the extent of Ben’s injuries were way beyond what they could handle apart from doing x-rays and some minor corrective surgery procedures.

“They did a couple of surgeries but basically they said bar amputation of the two feet there was nothing more they could do. But they did their best then got on to Galway and they agreed to take the case on. He was eight days in Letterkenny before being transferred to Galway.”

Professor Stephen Kearns, one of the country’s top Foot and Ankle Surgeons, told the family that the extent of Ben’s injuries matched the worst he had ever seen in his professional career.

“Professor Kearns told me that if Ben had been older or wasn’t as strong or fit as he was then it would have been amputation of both legs below the knee right away. He is giving it a chance to see how the surgeries go. Ben has been in theater six times already and he will be back in again on Saturday.

“There is a lot of nerve damage done and arteries have been crushed. He has been having a lot of skin grafts as well. When the first x-rays were done they couldn’t make out his feet. So some surgery was done wiring them up so they could look like feet again. Ben’s in awful pain all the time and it is beginning to get him down.

“So he needs help with that side of things as well. He was so positive for the first weeks but he’s on his own in a room in Galway Hospital for most of the week so that is very hard for him” Mark said.

Carole and Mark can really only get down at the weekends to see their son in Galway.

Both are working and cannot afford to take time off because the bills have to be paid and there is all the uncertainty of what potential costs are facing them in the future as regards Ben’s care. They have two other children.

Ben has been a very sporting young man having played rugby for the Ulster U18s while a member of City of Derry after moving from Letterkenny RFC. Two years ago he graduated to the City of Derry senior squad but Covid hindered his progress there.

On the GoFundMe Page Carole has thanked everyone that has donated so far including the Lennon Festival committee that held a quiz for the cause.

“We appreciate everyone’s support and are so lucky to be part of the Ramelton community. Thank you to each and every one of you that has donated and messaged words of encouragement” she said.

Ben has been working with the Letterkenny based Domestic Appliance Services for the past couple of years along with his father. He has been a regular on the competitive Motocross circuit for the past 12 years and is a former student at Mulroy College.

Carole and Mark would prefer not to be in this position of fundraising for the future care of their son but it is something that has been thrust upon as a result of Ben’s injuries. They do need more financial support for what is ahead on many fronts.