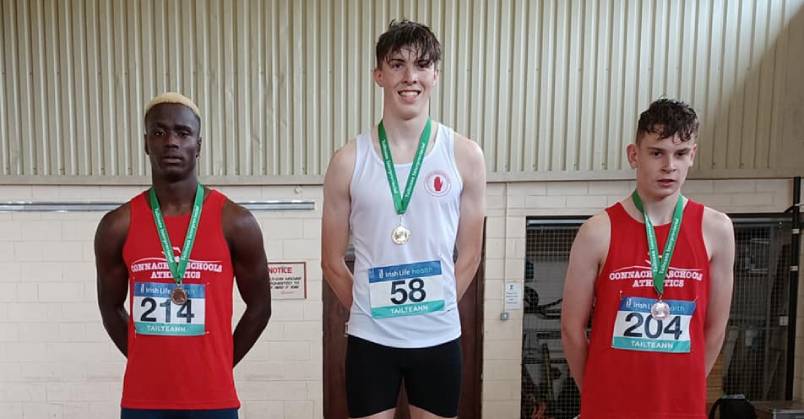 A host of Donegal students were in the medals at the Tailteann Schools Interprovincial Championships in Tullamore yesterday.

It was another successful day out for St. Columba’s Glenties student Fintan Dewhirst, as he won the 400m hurdles, storming home in a time of 54.87, three full seconds ahead of his nearest competitor.

Dewhirst, who was recently selected to represent Ireland at the European Under-18 Athletic Championships in Jerusalem next month, added to the hurdles victory as he won the 200m with a personal best of 22.24.

The Tír Chonaill AC athlete also was a member of the 4x400m and 4x100m Ulster relay teams, with the latter finishing third.

But in the 4x400m relay, along with Finn Valley AC athlete Daniel McHugh of St. Columba’s Stranorlar and Lifford-Strabane AC’s Finn O’Neill, Ulster took home gold in the 4x400m in 3:31.48, three seconds clear of the other three provinces.

O’Neill, who is also Jerusalem bound, took gold in the Boys 100m Hurdles and followed up with a bronze in the Boys Pole Vault.

There was more success for Lifford-Strabane AC in the throw events, as St. Columba’s Stranorlar student Caoimhe Gallen won the Girls Hammer with a best of 51.94m, 10m further than her competition.

Ellie McCurdy of Holy Cross Strabane won the Girls Javelin, with a winning throw of 40.55m.

Her club and schoolmate Ashleigh McArdle’s throw of 12.29 was enough for third in the Shot Put, just edging out Ava Anderson who was 4th with 11.88

Dean Leeper from the Stranorlar school was third in the Boys Javelin with a best of 48.26m, while his Finn Valley club mate Blaine Lynch was second with 48.77 which was enough to be named on the Irish schools team.

Daniel McHugh came 4th in the 400m individual event while club mate Amy Timoney of Rosses CS Dungloe was 5th in the 300m hurdles, just behind Ashleigh McArdle who was 4th.

Ella Costello of Crana College was 6th in the Girls 80m hurdles with a time of 11.94, but would help Ulster to 2nd in the 4x300m relay and Elsa Moore of Royal and Prior Raphoe was 7th in the 800m.

Fern Duffy of Loreto Letterkenny helped Ulster to third in the 4x100m relay, while she was 6th in the Girls 200m, finishing in a time of 26.69.

CP Cholmcille Doiri Beag student Daire McDevitt was 6th in the Boys Long Jump and Triple Jump, with best leaps of 5.97 and 11.83 respectively.

Amy Cullen of Loreto Milford ended 6th in the Long Jump, while in the Triple Jump, St Columba’s Stranorlar’s Maria Kelly was 7th, just one place ahead of Abbey VS student Ava Anderson.

Luke Ward was 6th in the Boys Hammer, and the Glenties student also finished 9th in the discus.