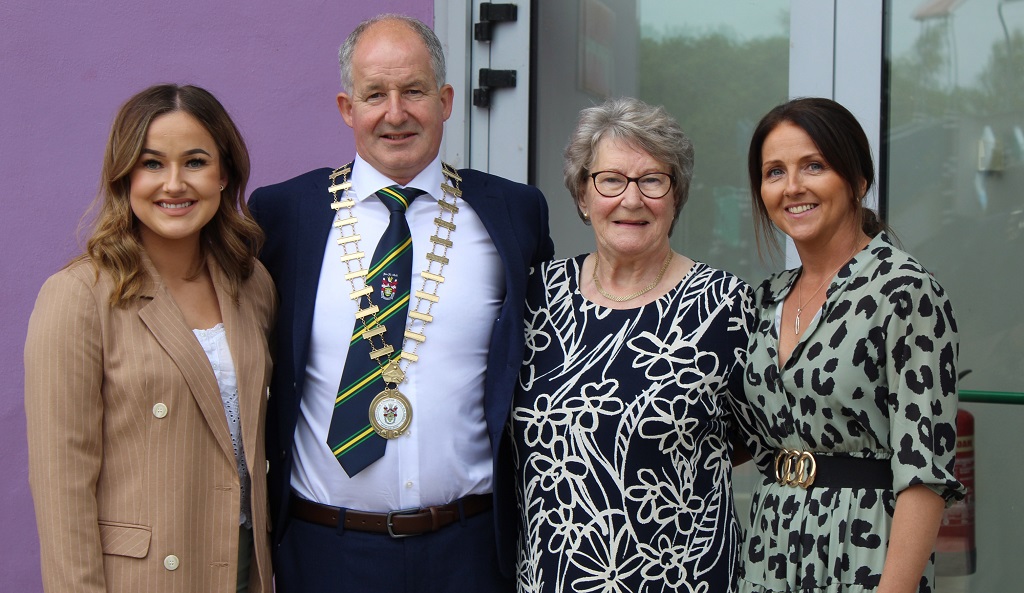 Fianna Fáil Councillor Liam Blaney has proudly accepted the honour and great responsibility of being the new Cathaoirleach of Donegal County Council.

The Fanad councillor was elected to the honour of being Donegal’s ‘First Citizen’ at today’s AGM in Letterkenny. He is the third generation of the Blaney family to serve as Chairperson of the council, following in the footsteps of his grandfather Neil, his father Harry and his uncle Neil T Blaney.

A farmer by trade, Cllr Blaney was first co-opted onto Donegal County Council in 2003. He has been re-elected in each subsequent local election since. 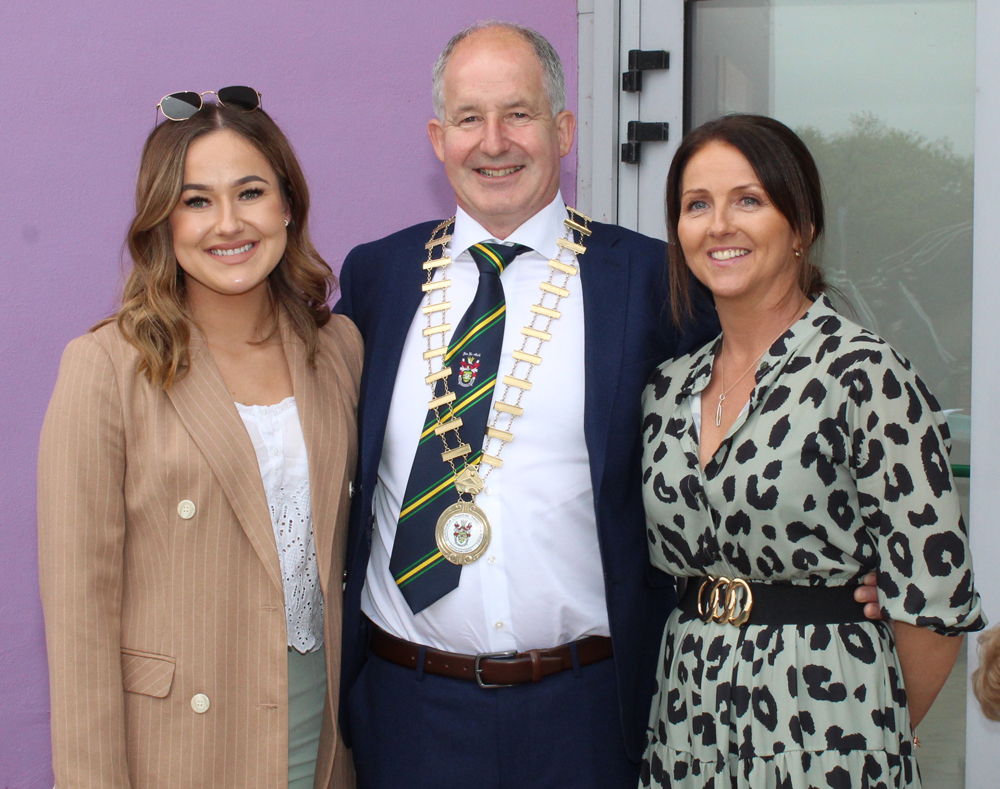 Cathoirleach Liam Blaney with his daughter Caoimhe and partner Noelle

“The Blaney name has been synonymous with politics for almost a century, not only in the county, but in the Dáil, Seanad and the European Parliament,” said Cllr Donal Coyle, who proposed Cllr Blaney as Cathaoirleach on behalf of the Fianna Fáil party.

“Liam is a person who does not hog the limelight, he is a person that works tirelessly for his constituents, Cllr Coyle said.

“He represents a rural area and he understands and recognises the challenges facing people who live in these areas.” 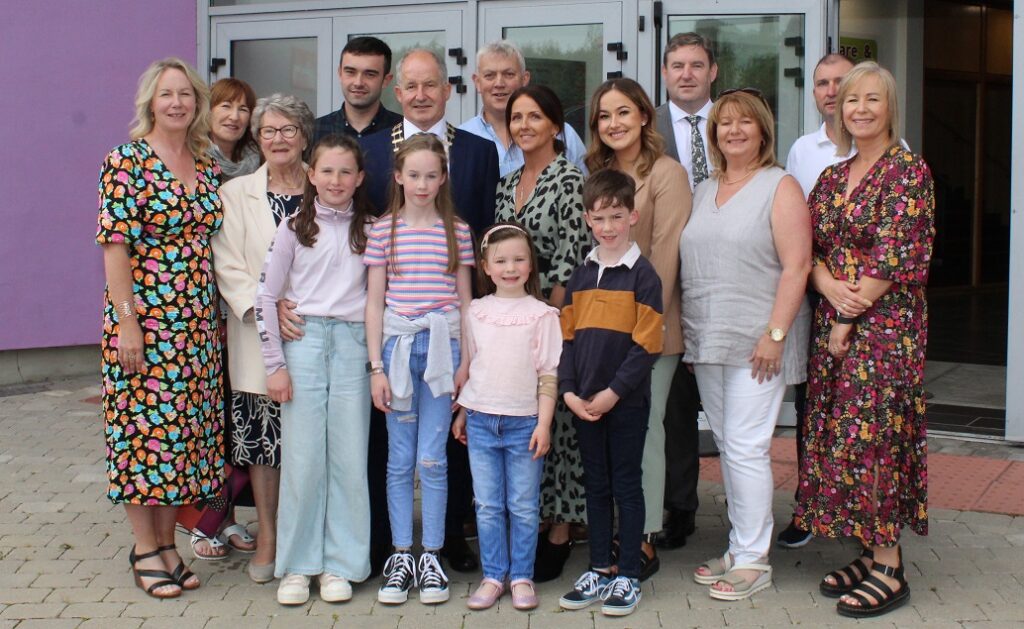 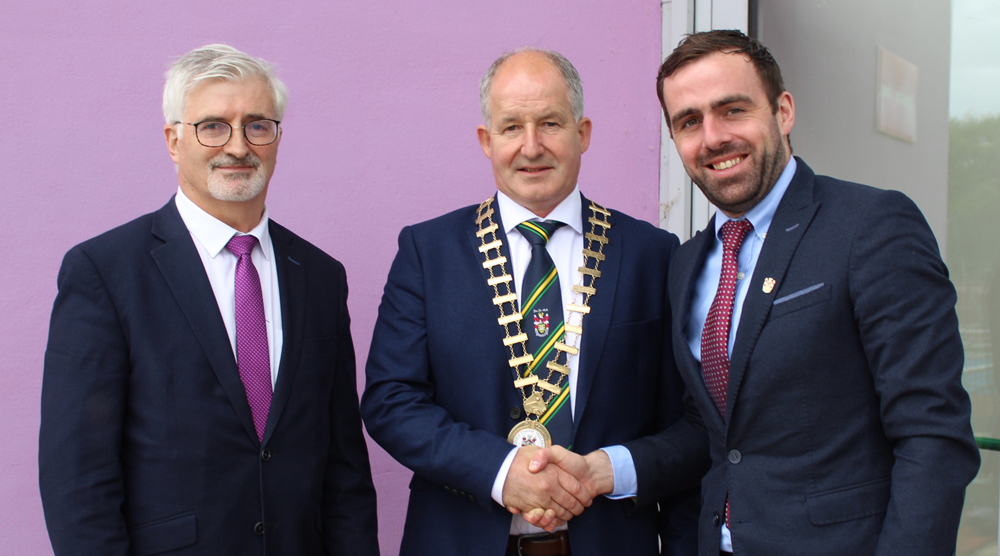 Cllr Coyle said Cllr Blaney’s “no-nonsense” personality and his “steely determination” and sense of fairplay will serve him well in the coming year.

In accepting the role, Cllr Blaney said he accepted the position of great responsibility “very willingly.”

“I come from a family of proud Republican tradition that reaches back to the foundation of the state,” he said.

His first goal was to request the Chief Executive John McLaughlin to write to Minister Darragh O’Brien requesting that a charter be drawn up to ensure the right of council employees to respect and dignity in the workplace is protected.

“Staff have informed me of their feelings of vulnerability in the workplace. In doing our job to hold the executive to account, we must also ensure our workforce are safe in the knowledge that their working environment is a safe place and fit for purpose,” he said.

Failure to provide a safe workplace, he said, is failing to provide the service councillors provide across the county.

Tourism and town centre regenerations are also among Cllr Blaney’s priorities, and he commented that he looks forward to an application in the near future for Rural Regeneration Development Funding for Milford.

Mica will continue to be a crucial issue in Cllr Blaney’s term. He said: “The Mica scheme needs to come to a conclusion that sees house repairs and rebuilds start as quickly as possible and begins to relieve the turmoil distress and frustration felt by homeowners living in crumbling homes.”

He said that a conclusion needs to be found to ensure homes are a source of “joy, peace and not anguish”.

Donegal MD Cllr. Michael Naughton (Fianna Fáil) was elected as Leas-Cathaoirleach, taking over the role from Inishowen Cllr Martin McDermott. Cllr Naughton said it was a huge honour to be Donegal’s second citizen, adding that he looks forward to working with Cllr Blaney in making sure that Donegal is kept to the fore. 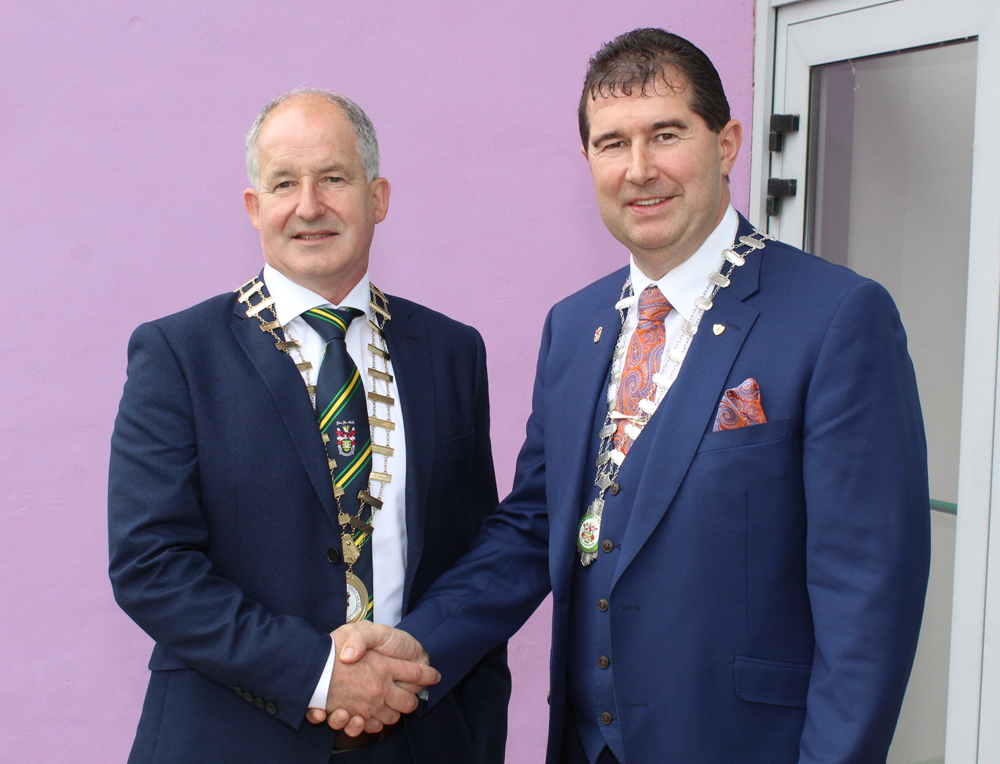 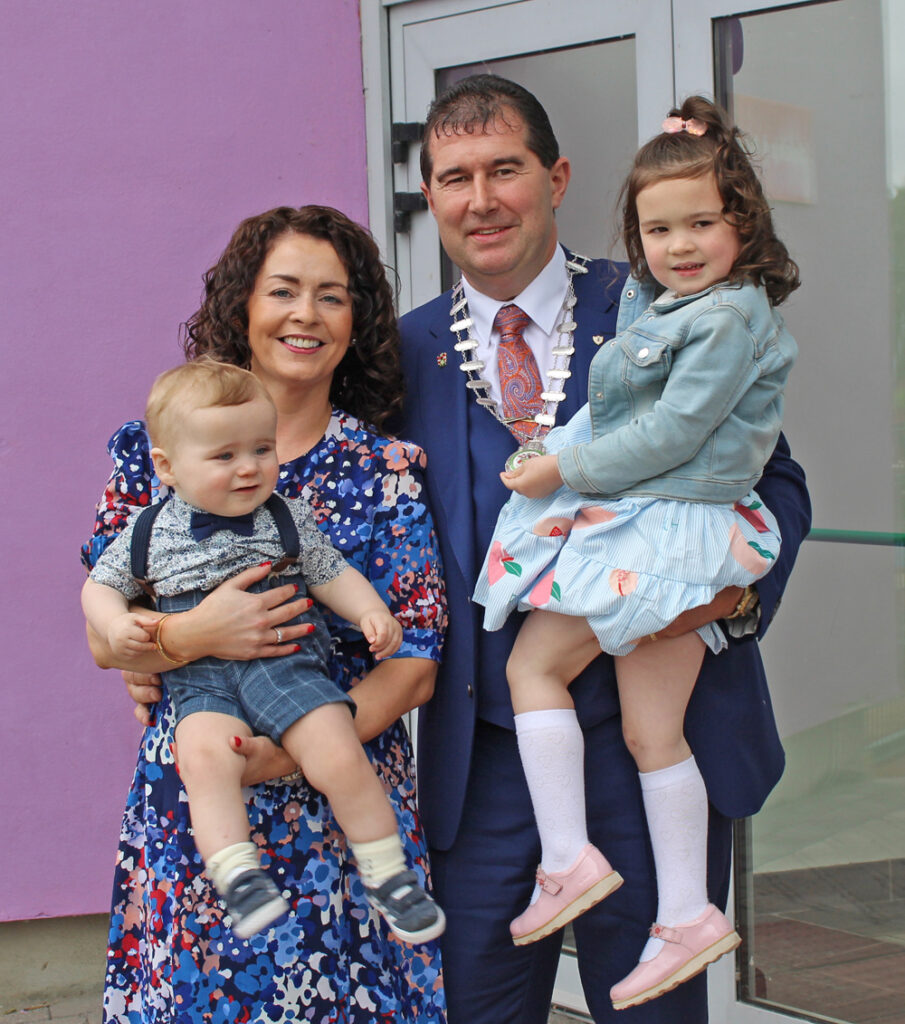 Leas-Cathaoirleach Michael Naughton with his wife Annette and their children Erin and Cian Micheàl.

Looking back on the past year, outgoing mayor Cllr Murray said it was the “experience of a lifetime”.

He thanked council members and the executive for giving him the “biggest political honour of my life.” The key moments, he said, have been centred on the Mica campaign, but he signalled there is a huge battle ahead. He paid tribute to Paddy Diver, Michael Doherty of the Mica Action Group and all those who energised the campaign to make it “the most powerful campaign movement this county has ever produced”. Other highlights, he said, were representing Donegal abroad and engaging with the diaspora. Cllr Murray issued a special thank you to his family for their support, before congratulating the incoming mayor and assuring him of his full support. 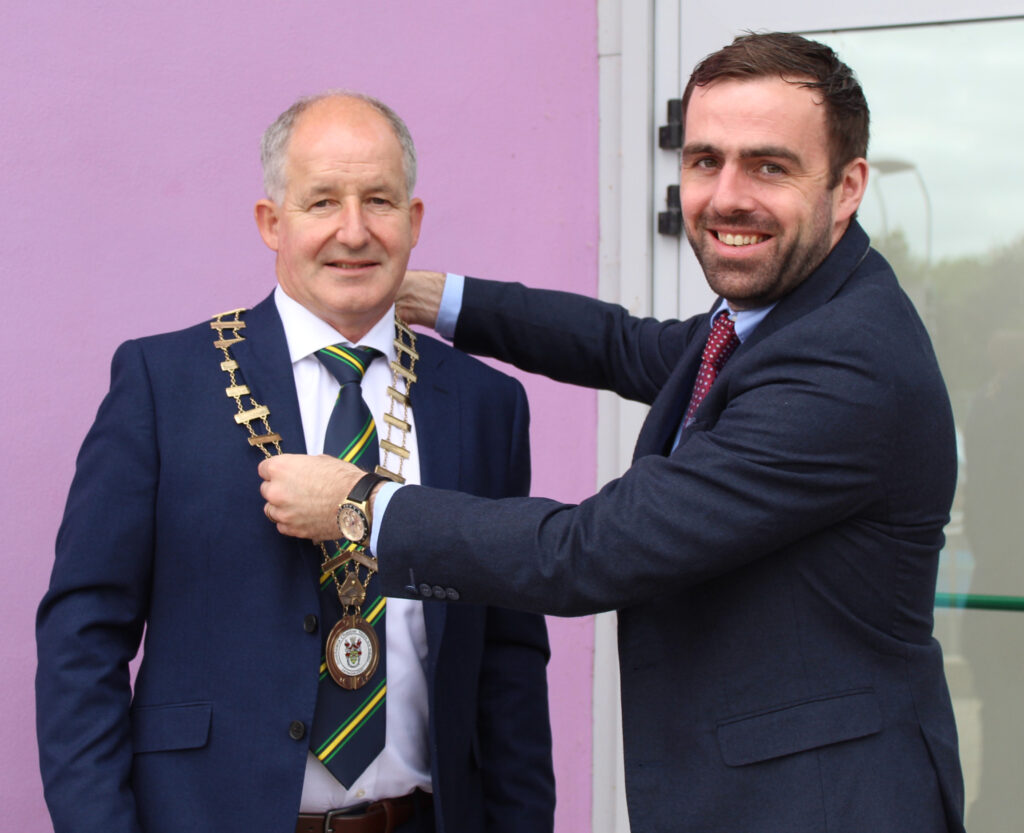 “Few people could rival the political experience that you have,” Cllr Murray told Cllr Blaney.

“You are a very proud Donegal man and you will do a fantastic job no doubt.” 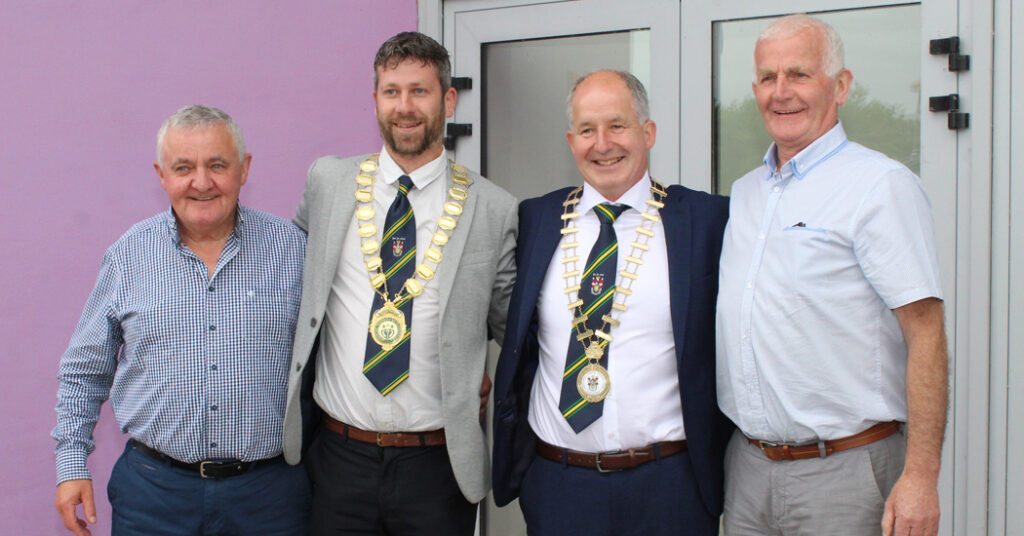