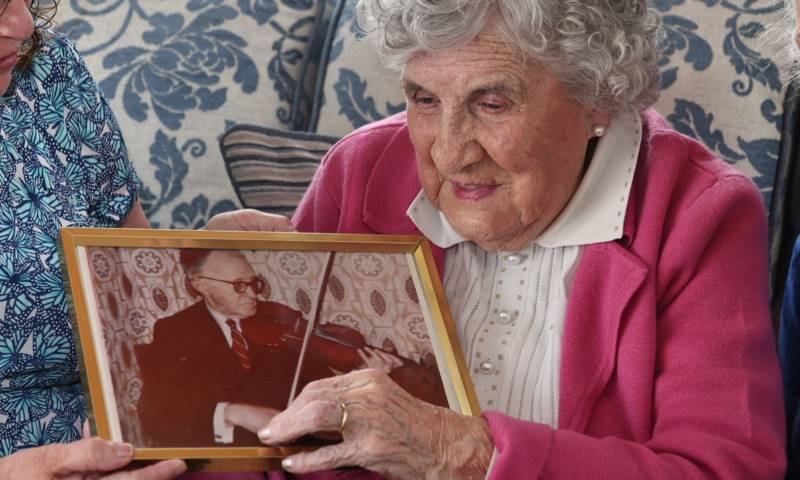 ‘Sure my daddy runs that place!’ A classic one-liner from one of Letterkenny’s most naturally funny and witty people.

It just came out as her daughter Geraldine was attempting to introduce Fr. Kevin Gillespie, the present day Administrator of St. Eunans Cathedral to her mother.

In that split moment Eilish Sweeney could remember herself as Eilish Conaghan, long before she was married, as a wee girl living with her two sisters Anna and Noreen, and her brother Vinci, her mother Bella and father Hughie.

They live at number 8 St. Columba’s Terrace in Letterkenny, her father is working in St. Eunans Cathedral as Sacristan. As she looked at the old photo, Eilish rubbed her fingers along the glass to where her fathers hand was playing his violin. 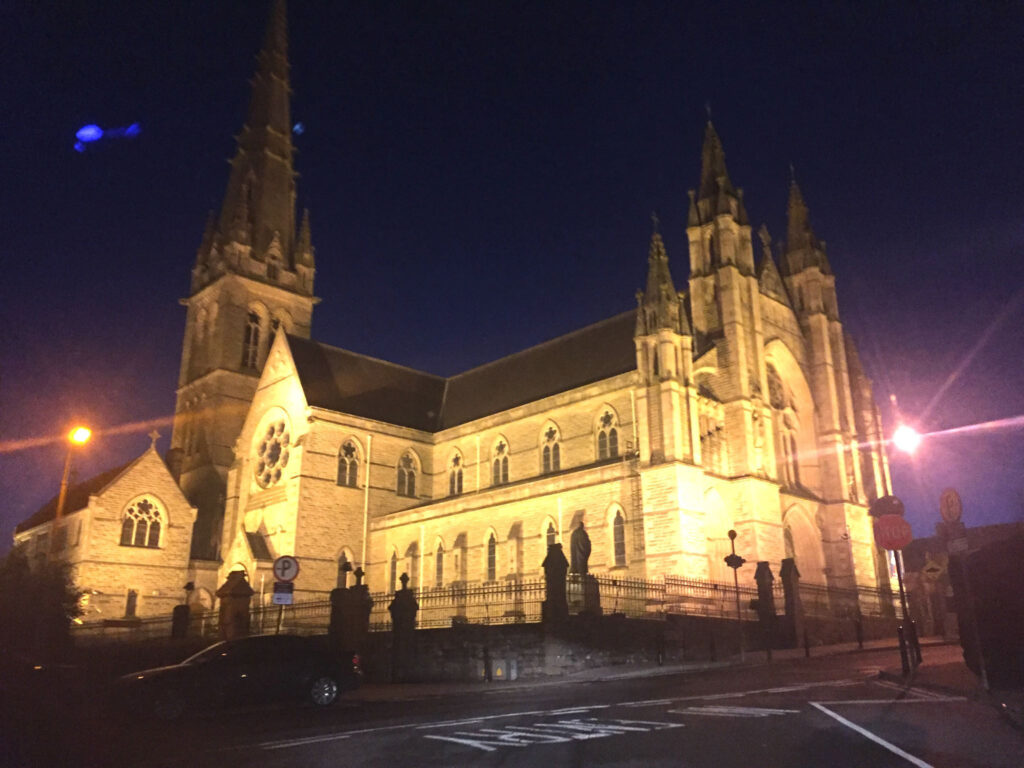 Her younger sister Noreen sat close beside her on the couch. They chatted among themselves, ‘She always was her daddy’s pet’ Noreen says looking at her older sister Eilish and the picture of her daddy playing the fiddle. 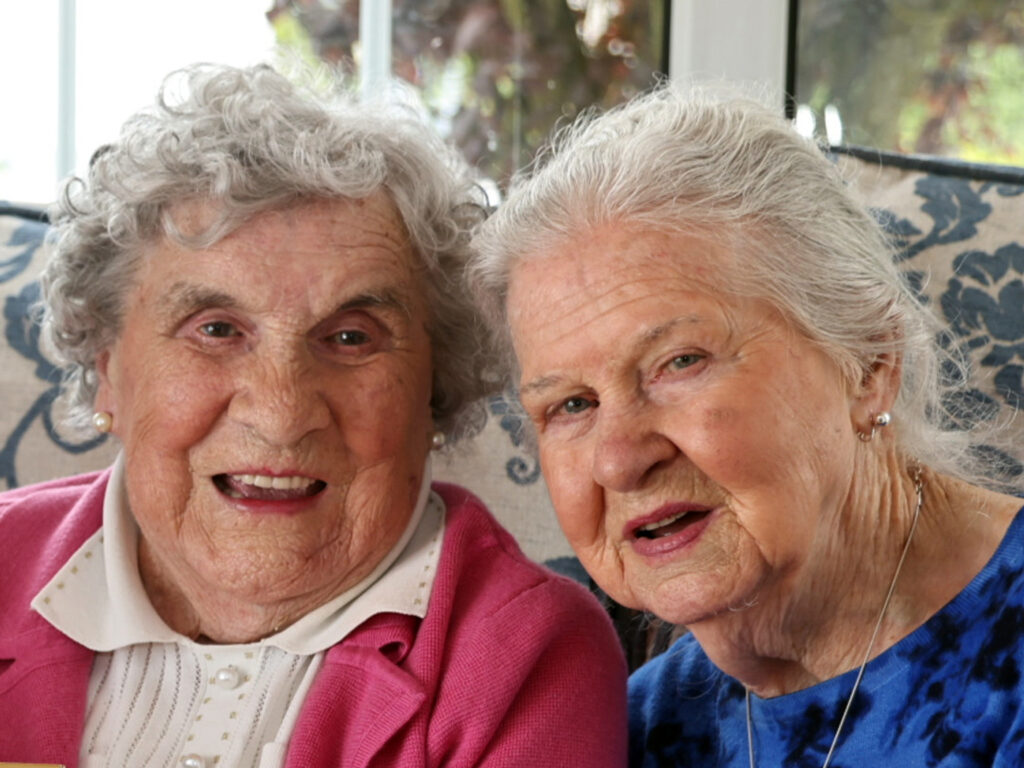 Eilish agrees; ‘I was daddy’s favourite’, ‘daddy always took her part if she was about to get a telling off, ‘Noreen continued. Noreen and Eilish were always close,  as children Noreen would write wee songs and Eilish,  always the entertainer, would sing them special wee songs back to her sister.

Eilish has the Raphoe Diocesan Archives Curator, Moira Hughes in stitches as only Eilish can,  whispering a couple of observations while we’re trying to do a presentation photo of the Portrait of Bishop William MacNeely painted by Hughie Conaghan, Eilish’s father, when he was the St. Eunan’s Cathedral Sacristan in the 1950’s. 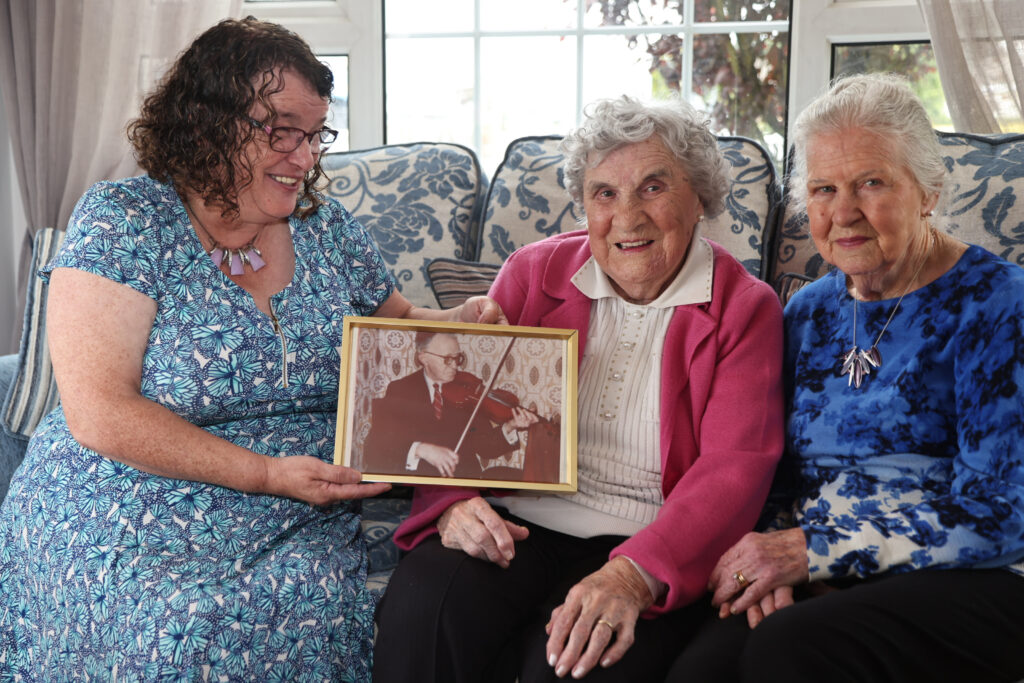 Then Noreen recalls when the portrait was painted that everyone remarked how well their father had got the eyes. Noreen was right, the eyes have it, looking away from the viewer in a classic pose from that era.

Hughie Conaghan was a talented musician and played in a band in his younger days. He also loved to paint and sketch, his home had a lot of his art work at St Columba’s Terrace but the painting that he did of the Bishop of Raphoe the right Rev. William MacNeely took pride of place in the family home for years.

When Hughie took his hat and pipe and moved down to his daughter Eilish Sweeney’s house in the lower Ard O’Donnell in his later years, the family gifted the painting to the girls’ school, Scoil Mhuire Gan Smal, where the bishop had placed the foundation stone in September back in 1954. 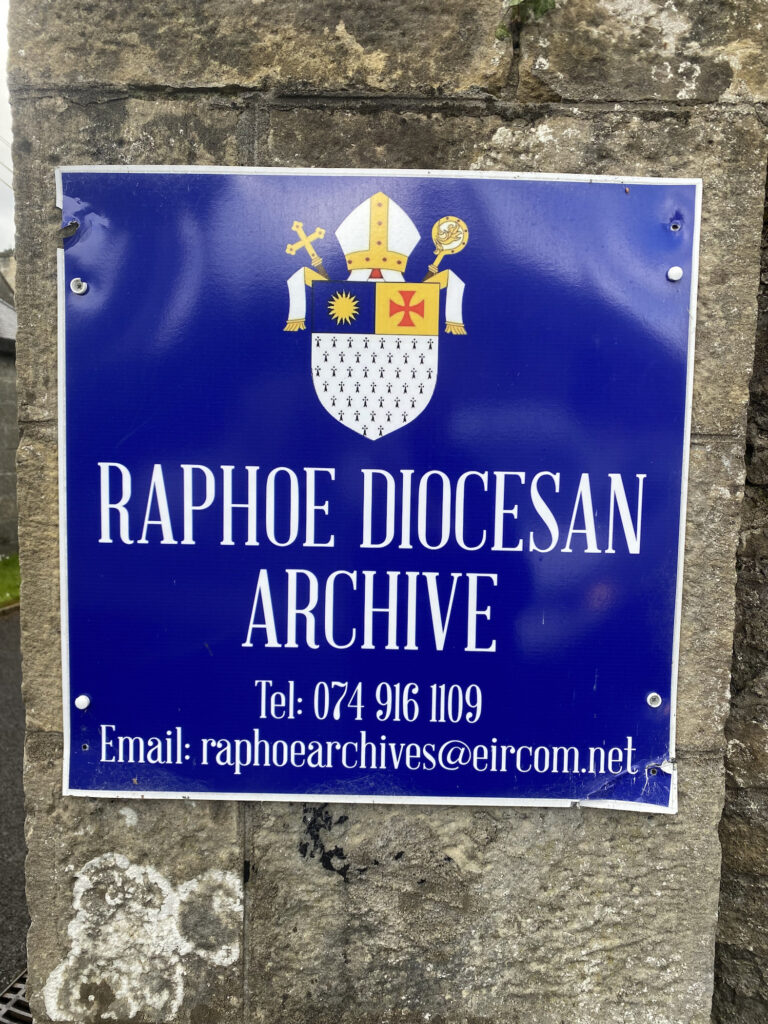 60 odd years in, when the school was undergoing a major renovation, the painting, complete with a signature in beautiful handwriting by the Artist Hugh Conaghan and the date, 1956, was written in the back was returned for safe keeping to the Conaghan family in Newtown, to Hugh Conaghan TD who was a nephew of the Letterkenny Hugh Conaghan, who in-turn gave it back to Eilish in Letterkenny.

It was a chance meeting in Macs Mace, (on the High Rd a few yards from the Conaghan Home place) that Eilish’s daughter Geraldine told me that she was trying to arrange to have the painting handed over to the Raphoe Diocesan Archives in Letterkenny.

But they wanted the two remaining sisters of the Conaghan family, Eilish Sweeney and Noreen O’Boyle to make the presentation to Fr. Gillespie on behalf of their late father. 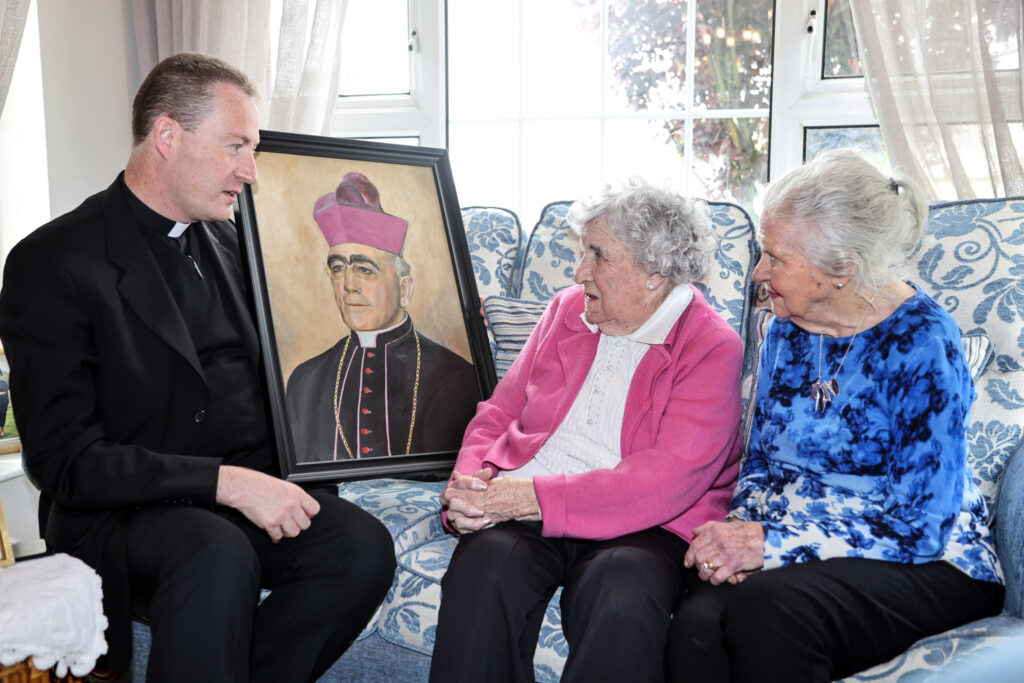 Fr Gillespie in conversation with sister Eilish Sweeney and Noreen O Boyle at the presentation of their father painting. Photo Brian McDaid.

This all came to pass last week and at number 1 Ashbrook where Eilish, like her father before her, has moved to her daughter’s house in recent times where Geraldine and her siblings care for their mother.

As the presentation was made in the front sitting room in Geraldine’s home, tea and scones were in abundance, best china , apple tart, ice cream, fresh cream was all laid out just as Eilish would do if she was in better form.

Then Noreen decided to announce in front of the family group, the historians and clergy that she and Mary Ellen Coyle often schemed school and headed down the town and told people they met they had the day off.

Mary Ellen Coyle was my mother and a great friend of Noreen and Eilish.

Sadly it didn’t spark a memory for Eilish today. They were friends all their life, they grew up together, they were both in hospital pregnant at the same time and gave birth to two bouncing baby boys, both their youngest, in the very same week, her Colm born on the 11th and our Peadar was born on the 15th December 1967.

Both friends were side by side in a three bedded ward, and recalled memories of their youth. My mother was a dressmaker and Eilish would regularly get outfits made for her girls and herself up at our home.

I know this because Eilish has told me different wee stories about my mother over the years. Colm and Peadar were in the same class at school and even though Peadar, the youngest in our family, had no memory of his mother who died at age 41 when he was just 2, Eilish always reminded Peadar how talented his mother was.

Eilish and Noreen are now the last remaining generation of the Conaghan family and proudly handed over their father’s  painting to Fr. Gillespie and the curator Moira on behalf of their late sister Anna Mc Glynn from the Upper Ard O Donnell, and their late brother Vinci (Dublin).

The last photo we take is of all who were there for the presentation, and the picture just sums up the atmosphere on the day. Eilish is doing what she does best, making everyone see the funny side. 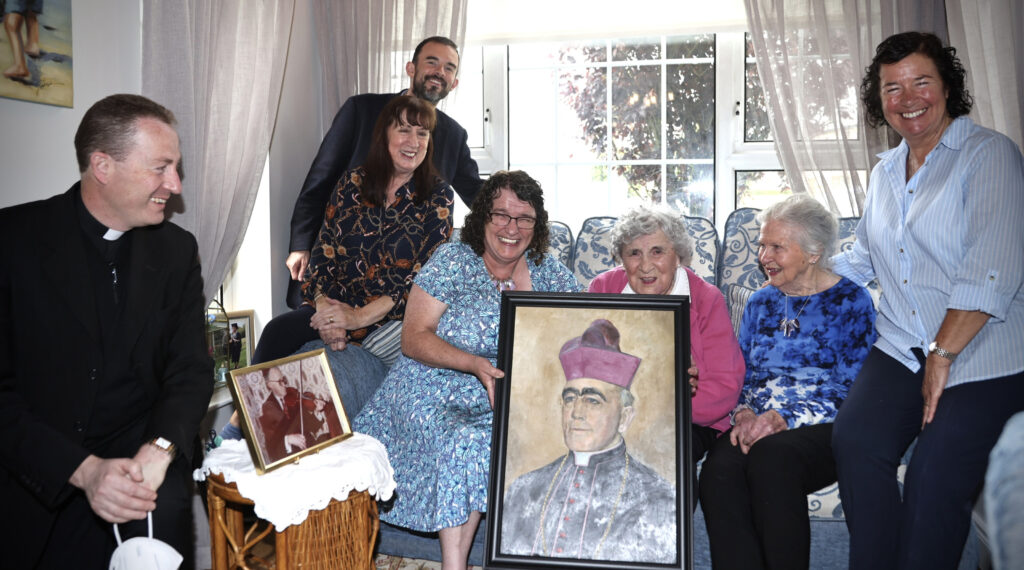 Eilish steals the show as she has everyone in laughter at the presentation of her father painting. Photo Brian McDaid.

I have known Eilish all my life but today Eilish didn’t know me. Eilish looks out from behind her fathers painting in the middle of the sitting room, and calls out to me ‘God. That’s a big man there!’ and instantly she has the room in laughter, everyone is in stitches, just like she has always done.