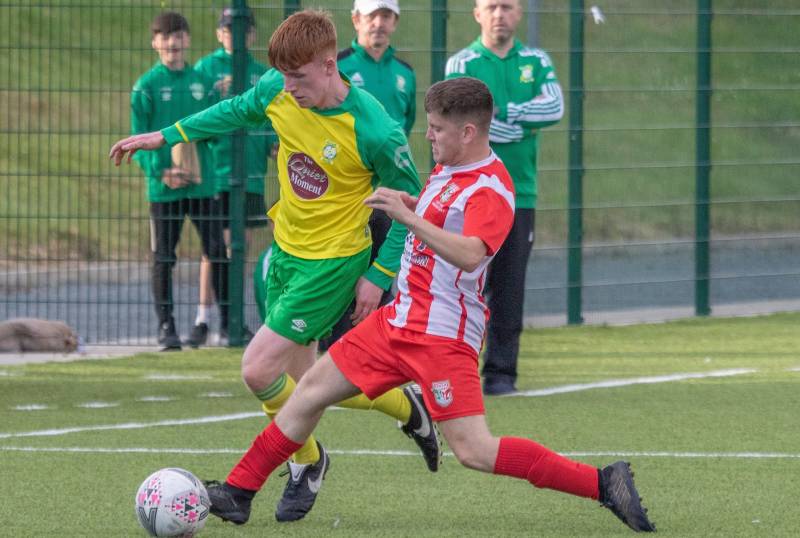 An exciting night in the Donegal Youth League as Bonagee Utd failed to get the point they required to win the league and they go to Drumkeen next week in their penultimate game needing a win to lift the crown. 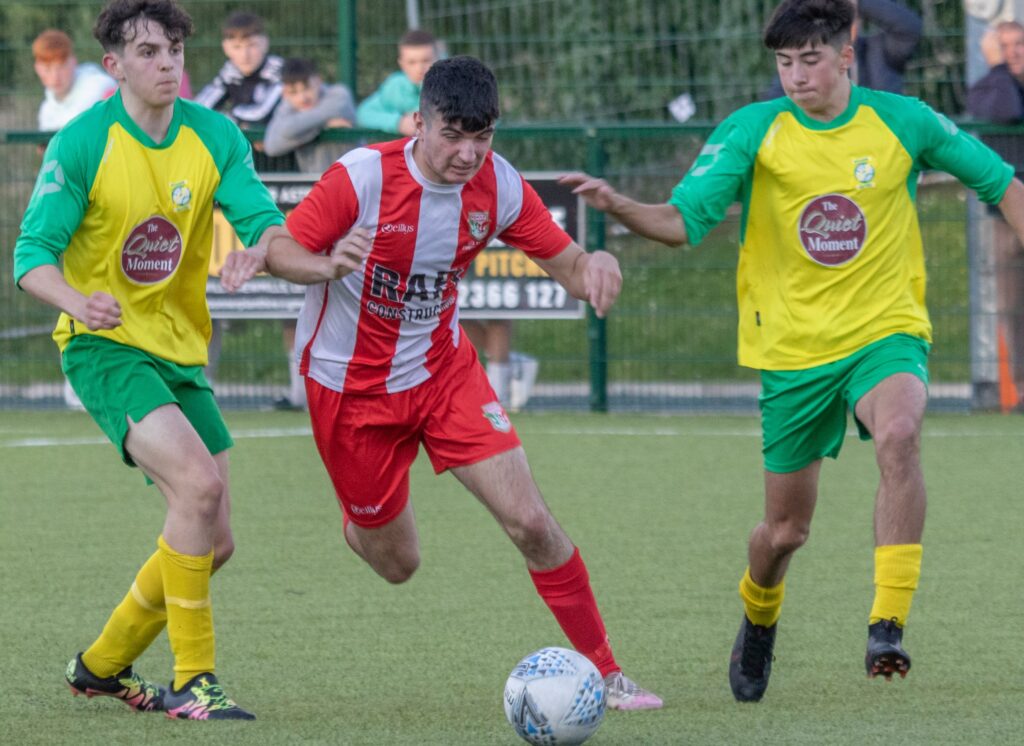 The weather cleared just before kick-off to allow perfect conditions for this key game in the youth league title race. 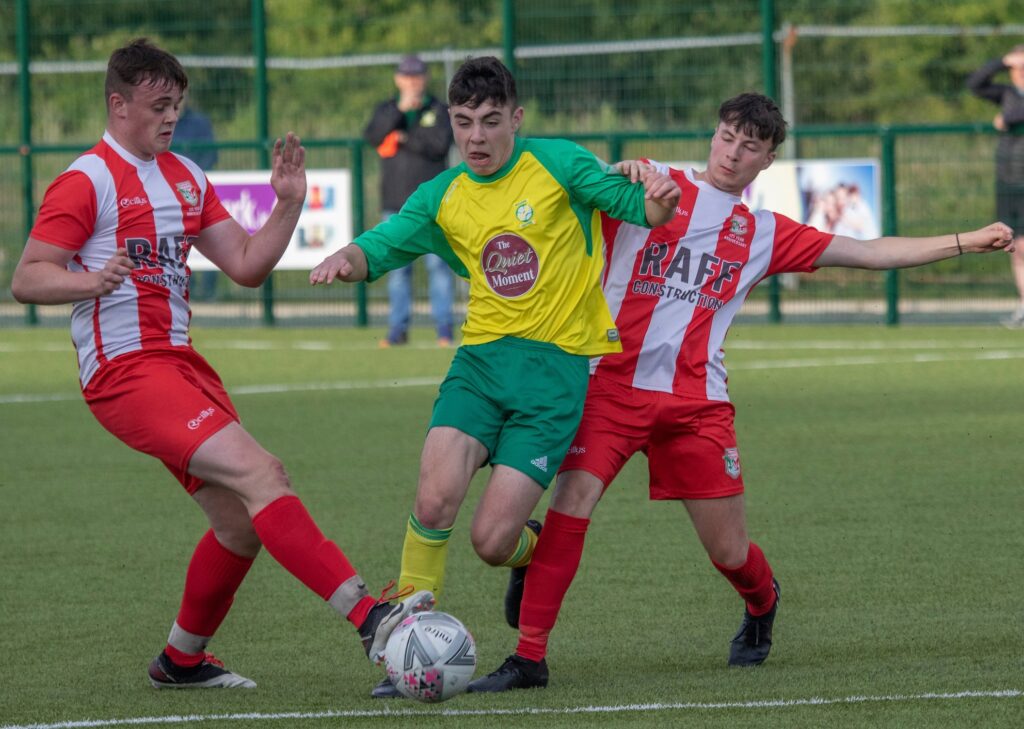 The men from Keadue started the game best and got rewarded when the Bonagee keeper brought an attacking player down on the edge of the box. Oran Fallon stepped up and made no mistake from the spot. 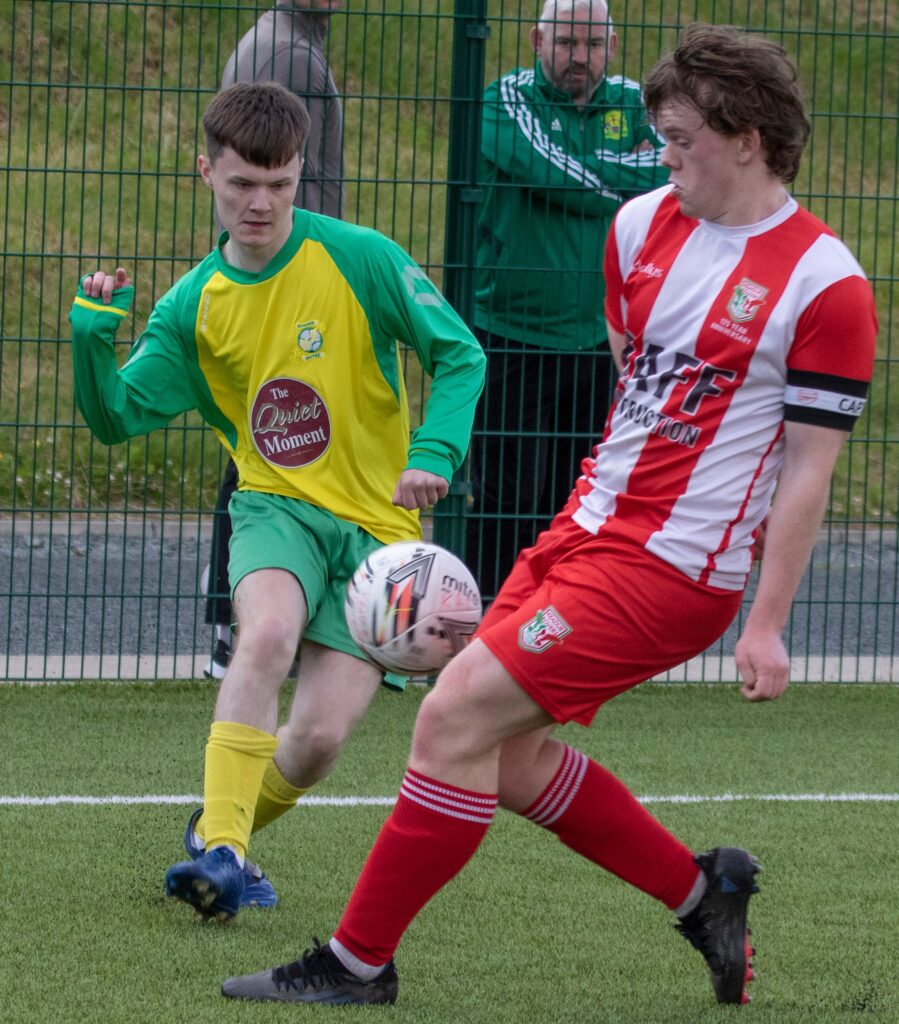 The Keadue team were lifted by this and all that pressure lead them to win a series of corners.  Keadue took advantage of this and within 30 minutes found themselves 3 nil up with  two great headed goals from Ryan Brennan & Jack Ward from the resulting corners. 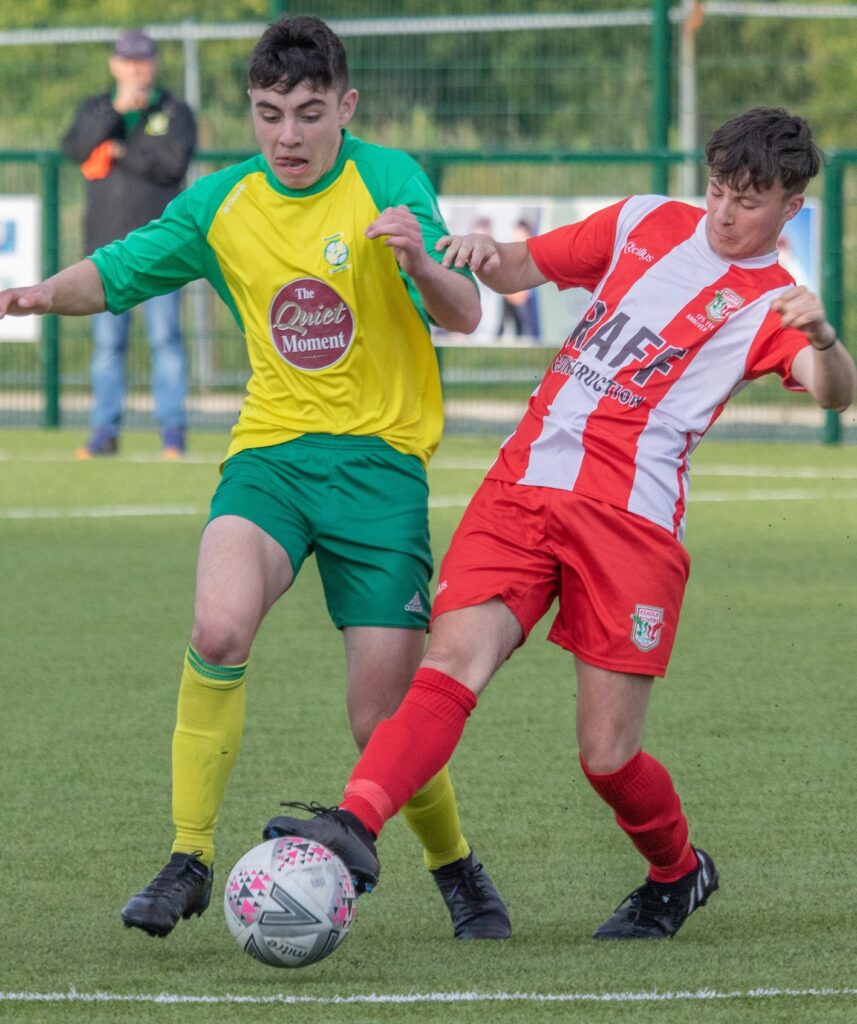 Bonagee made some tweaks and started to find some traction in the final minutes of the first half. The second half was then all one way traffic for Bonagee, they struck back early in the second half when Ciaran Dalton was quickest to react in the box to turn the ball into the back of the net. 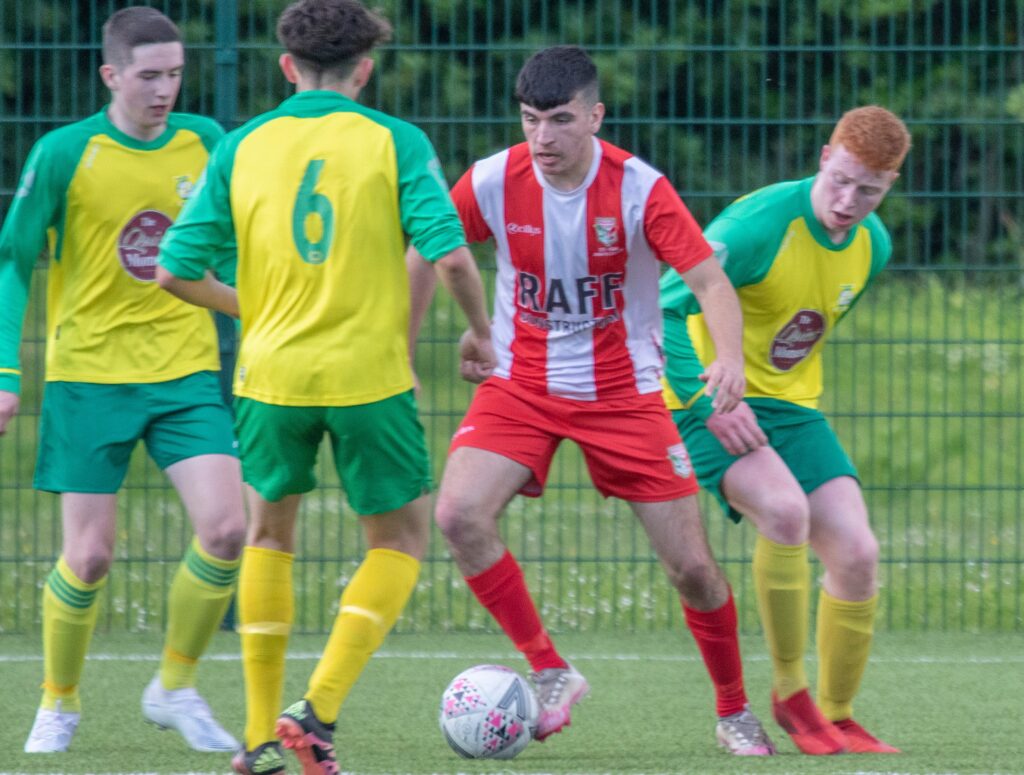 Dalton was alert 10 minutes later and fired into the back of Keadue net again after a great phase of Bonagee play.

An inspired display from the Keadue keeper kept them in the lead, after a constant barrage on his goal.

Bonagee hit the post with 10 minutes left, but unfortunately it wasn’t to be for them and will have to go again against Drumkeen next week to try and secure the title.

The Youth League returned from Leaving Cert break on Wednesday evening and it was Letterkenny Rovers who overcame some early tardiness to come from behind to defeat a gallant Mulroy-Fanad 4-1.

The game got off to a blistering start in almost near perfect conditions when Mulroy-Fanad took the lead on 4 minutes when Dylan McGlones superb left footed effort from distance flew over Rovers goalkeeper Brian Alves de Costas head.

Rovers responded well and came close to levelling on three occasions in the one incident through Sam Harvey, Ciaran Kelly and Aaron Temple but the visiting defence marshalled by goalkeeper Eoghan McTeague stood tall to snuff out any threats before they almost doubled the lead through the lively Charlie McAteer who drew a good save from Da Costa before Sean Carr narrowly headed over.

It was the home side who scored the all important next goal and it was a cracking free kick from Luke Parke on 23 minutes which drew the sides level and that gave them added momentum and they doubled the lead on 32 when the impressive Aaron temple slotted home low after beating the offside trap.

McAteer then came close twice to equalising before goal on 35 from Oisin Duffy and 39 from Faolan Gibson had Rovers in a commanding 4-1 lead at the break.

The second half didn’t reach the lofty heights of the opening period in terms of goals scored with Mulroy-Fanad giving it a real go and came close on a number of occasions to reducing the arrears with McAteer rattling the woodwork while Brandon Friel and Caolan Gibbons efforts also threatened while Rovers also had chances to go further in front through Gibson, Temple and Duffy but they were glad to see the game out well for an impressive win.

Both sets of players were keen to impress after the few weeks off and Ballybofey Utd pressed hard & were the better side in the first half as Ballyraine struggled to keep them out playing into the sun as it was 0-0 at halftime.

Ballyraine seemed to more relaxed in the second half and turned the tables for the first 20 minutes with Ballybofey on the back foot.

It became a scrap to the end resulting in a few yellow cards being dished out.

It looked like a 0-0 draw was gonna be the result but in the 92nd minute Ballyraines striker Danny Hall was taken down in the box and centre half half Harry Winfield stole the winner from the penalty spot drilling the ball into the bottom left.

On a lovely evening in Drumbar, the Drumbar lads worked hard on a soft underfoot conditions and played some fantastic football to get the 3 points.

Drumkeen were a very hard and solid team to break down. Drumbar broke the deadlock after some fine play from Senan Carr, who rifled a great shot from just inside the box, into the corner of the net.

The game was back and forth after that and with 5mins left of the half, Senan Carr got his second of the game from some fine work from Ruairi McLaughlan who set Senan up perfectly who fire into the same corner.

The 2nd half started slow for Drumbar as the Drumkeen lads battled hard to find a way back into the game. On 55mins, Drumbar worked the ball out from defence and again some great teamwork and passing, sent Murphy down the line, he crossed the ball in first time for Carr to slot home his hat-trick.

On 65mins, Drumkeen pulled one back with a shot from 6yards out. It was nothing more than they deserved for all their hard work.

On the 75th min, Ruairi McLaughlin got the goal he deserved for his hard work to make it 4-1.

Drumkeen again fought hard and pulled another back after a deep corner was headed home at the back post to make it 4-2.

With 10 minutes left, Leo Carey was played through and after a great save from the keeper, the ball bounced out to Carey , who laid the ball back to Robbie Murphy on the edge of the box, who smashed home to make it 5-2.

As in the previous two games, Milford took an early lead due to a very bright start, with Finn Coll adding to his impressive tally for the year by finishing with a tidy glancing header.

Milford continued to pile on the pressure in the search of a second, but found the Gweedore keeper Padraig McBride in absolute sublime form, saving from two one on ones, and then preventing Killian McBride again from close range.

Milford’s back line again was very strong, preventing Gweedore from creating anything clear cut. In the second half however, Milford found it harder to create the same chances as in the first half, but when Corey Lee McConigley cut inside form the left flank and rifled a shot towards goal.

It looked like the second goal would come, but again McBride made a fine stop to keep Gweedore in it. As the clock ticked towards the 90 minute mark, and Milford started to get a bit edgy, Gweedore poured men forward and were almost rewarded with a goal, but Eoin McGettigan was also in good form and saved well from a good header.

Milford deservedly held out to claim a much needed 3 points.