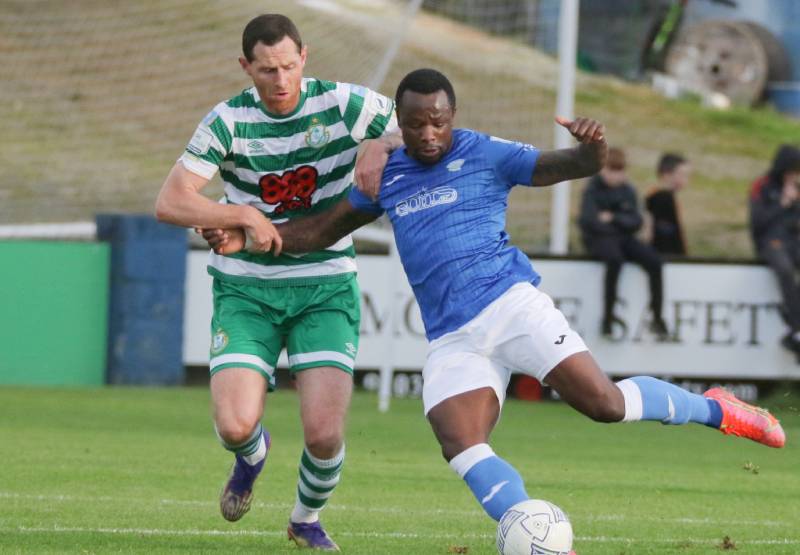 A Rory Gaffney wonder strike was all that separated the two sides as Finn Harps lost 1-0 to league leaders Shamrock Rovers at Finn Park.

Gaffney made it 1-0 in added time of the first half with a brilliant drilled strike from 30 yards into the bottom corner, giving Gavin Mulreany no chance.

Harps defended well and pressed for an equaliser but couldn’t find their way past Alan Mannus as Rovers missed chances in injury time to make it 2-0.

Harps went into the game looking to build on their 2-2 draw last weekend as two goals after the 87th minute gave them a 2nd point in seven games.

Ollie Horgan made three changes to his side after that draw with St. Patrick’s Athletic, as Bastien Héry and Ryan Connolly returned from suspension, while last week’s goalscorer José Carrillo returned to the starting XI.

They replace Dylan Duncan, Ryan Rainey, and the suspended Ethan Boyle, who got that last gasp equaliser last Friday. 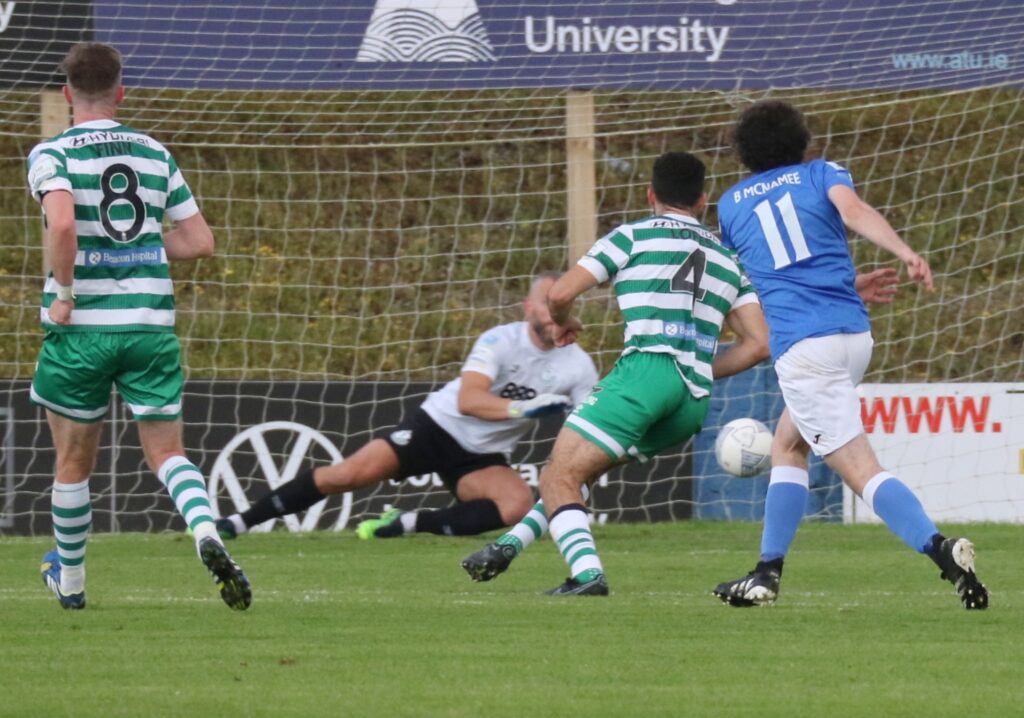 The league leaders meanwhile, made two changes from their win away to St. Pat’s at Richmond Park on Monday night, as Andy Lyons, who scored twice at Finn Park earlier in the season, drops to the bench.

Sean Hoare also was dropped to the bench, with Ronan Finn and Sean Kavanagh coming into the side.

Rovers dominated play early on and threatened with numerous corners, as Harps tried to counter with long balls to Eric McWoods, but to no avail. 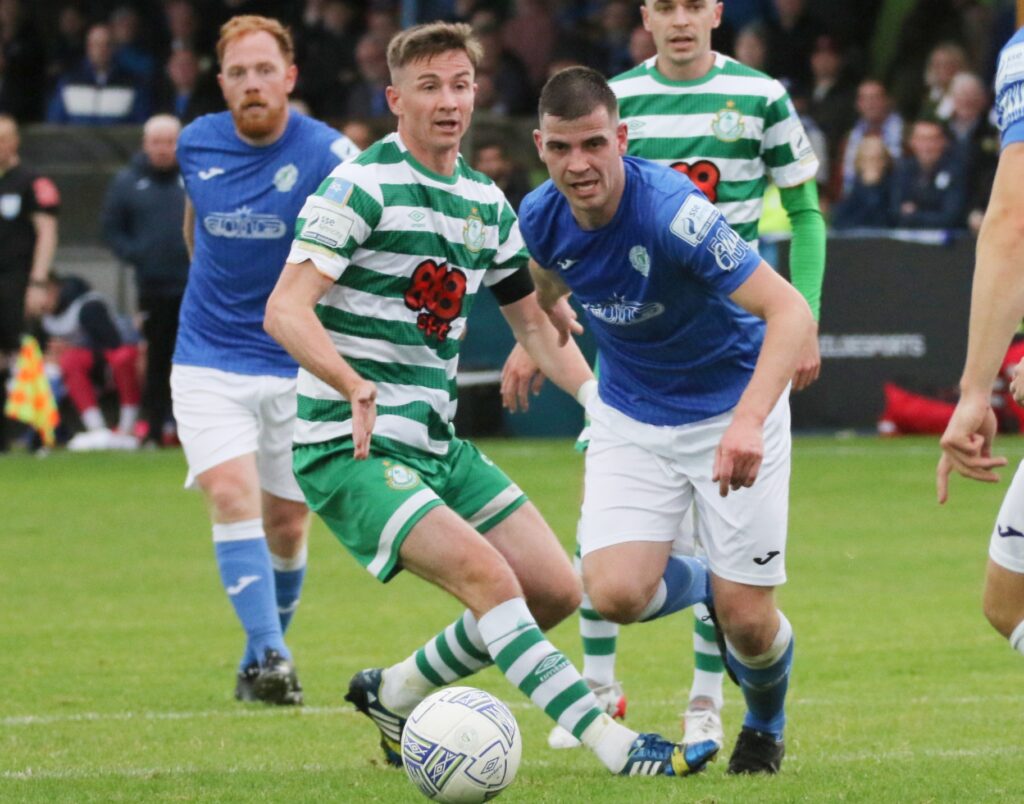 After patient play, Kavanagh got behind his man and his low cross was parried by Mulreany but he got there at the second attempt with Rovers players ready to pounce.

Dylan Watts was the next man to threaten with a series of chances, but his first was arguably the best of the half.

Rob Slevin slipped and allowed the Rovers midfielder in 1-on-1 at the edge of the box, but his curled effort was tame and Mulreany saved comfortably as the first quarter of the game provided few clear cut chances.

Watts had a dangerous free kick blocked, then his chipped effort after Mulreany came out to catch a cross but it fell onto the roof of the net. 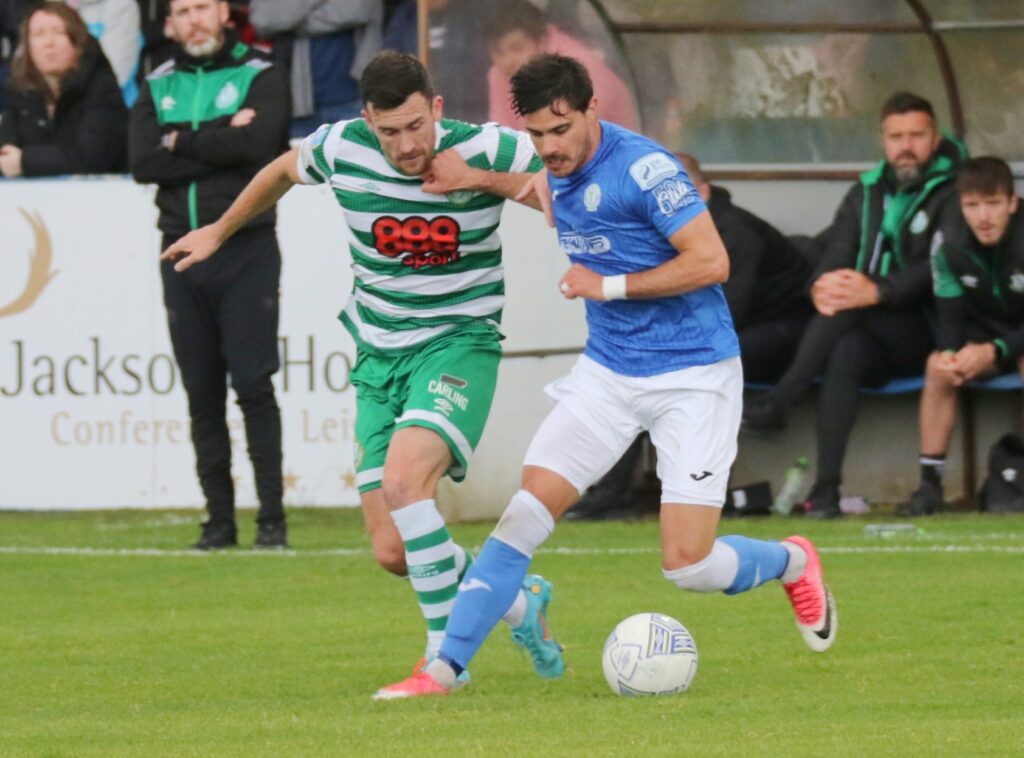 Harps had two half chances 10 minutes before half-time, firstly through Mihaljević, but his shot from outside the box trickled wide. Minutes later, McNamee tried his luck from outside the area but Mannus saved well, his only time being tested in the half.

It looked like Harps were going to hold on until full time but after the Hoops were patient in possession, Gaffney dropped deep and had an effort from 30 yards.

His shot was drilled low into the bottom corner and despite Mulreany getting down low, it was pinpoint into that corner that gave the Inver man no chance to save as the scoreline read 1-0 at half-time.

Rovers began the second half the same way they ended the first as Harps were put under pressure, with Watts testing Mulreany from outside the box after a short corner. 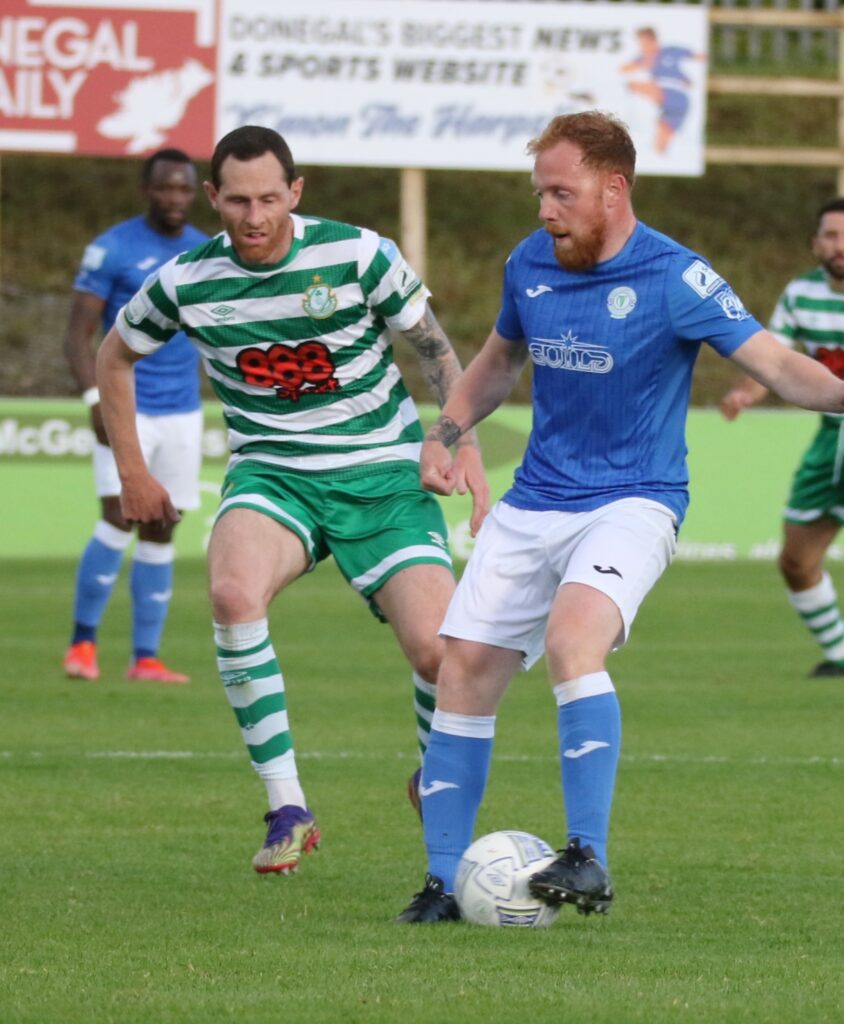 The first chance for Harps in the second half came through a Regan Donelon free kick but McWoods couldn’t get on the end of it.

Stephen Bradley’s side had another chance again down the right when Finn got in a good position to cross to Greene at the front post, but he couldn’t turn his shot on target.

Harps began to threaten from long throws, and with Boyle missing, Conor Tourish stepped up with two in a row. The first one fell to McNamee on the edge of the box and his shot was on target but was blocked, and the next had to be headed clear in the six yard box by Kavanagh. 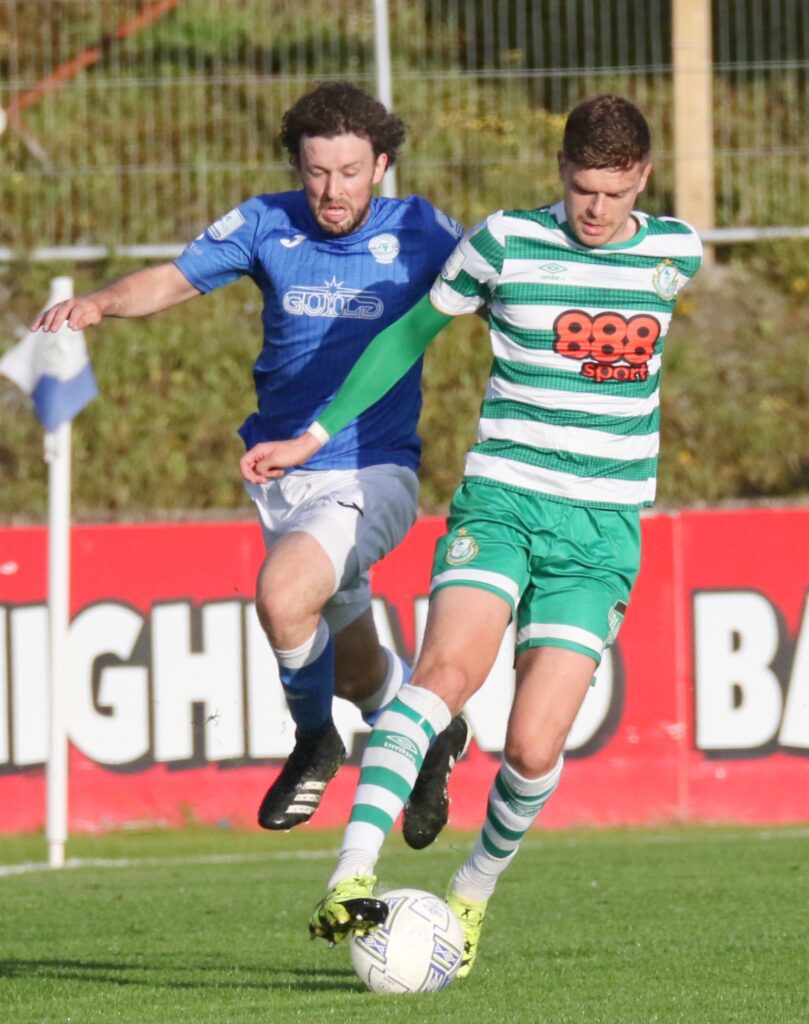 Richie Towell came on with 18 minutes to go and should’ve scored from his first touch of the game, after Gaffney’s cross found him in acres of space at the back post, but he fired wide.

Another Tourish long throw threatened the Rovers defence as the ball fell to Rob Slevin, but he volleyed over the bar.

Rovers subs Barry Cotter and Aidomo Emakhu should have made it 2-0 from counter attacks for the away side in injury time, but Cotter shot wide and Mulreany saved well from Emakhu.

Rovers stay top by 10 points as Dundalk beat UCD 3-0, while that same result means Harps stay three points clear of the bottom side. 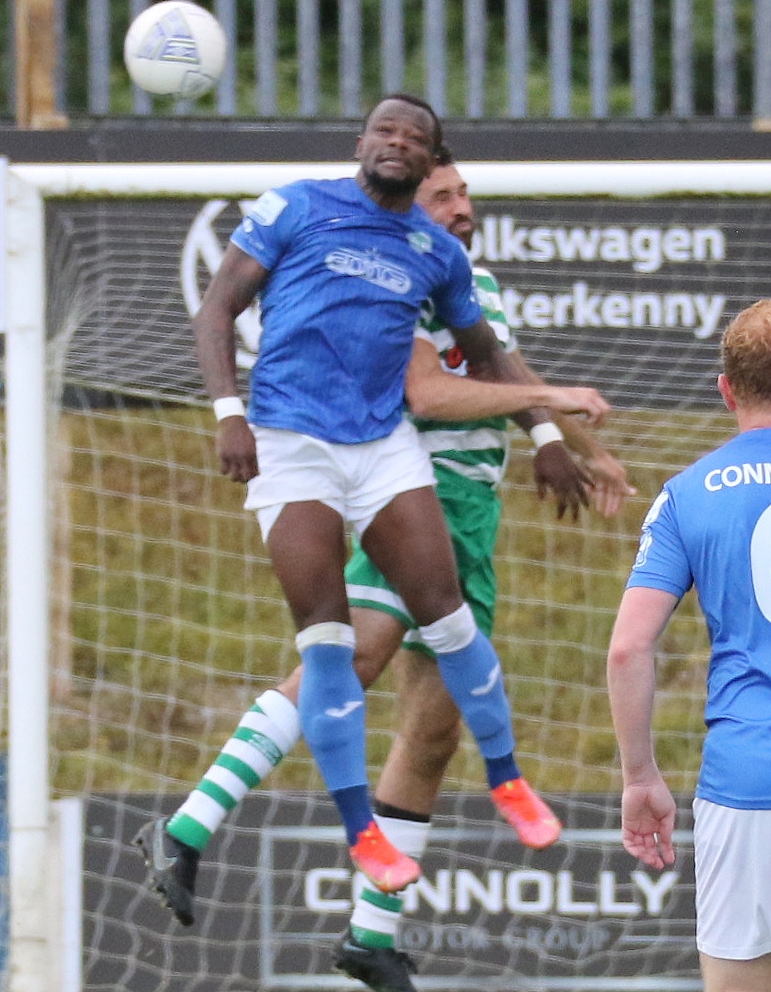