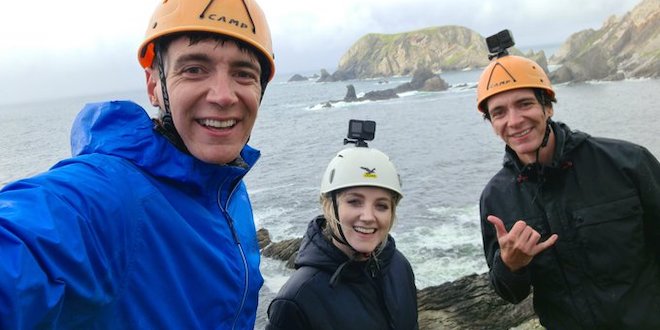 Three Harry Potter stars had stacks of fun on a trip to Donegal which they’re sharing with the world in a new travel show this year.

James and Oliver Phelps, best known as the Weasley twins from the wizarding world of Harry Potter, will be showcasing an enchanting part of Donegal in their series Fantastic Friends.

They joined up with Evanna Lynch, who played Luna Lovegood, for episode five, which is all about Ireland’s magical adventures.

The trip takes them to the breathtaking sea stacks outside Glencolumbkille village. Climbing the stacks is not for the faint-hearted, but the risk-taking trio braved the heights with the help of professional climber Iain Miller from Unique Ascent.

The episode also follows the twins as they meet with Evanna’s father and the rest of the Lynch clan in the Irish countryside for hurling, dancing, discussion of the Harry Potter movies, and a date with the spirits.

Fantastic Friends is a six-part series packed with the twins’ extraordinary exploits as they meet spellbinding guests, explore enchanting cities and take on phenomenal challenges… while managing all kinds of mischief along the way.

The show is airing in Canada, across Europe, the Middle East and Africa and is due to be released in the UK and Ireland later this year.