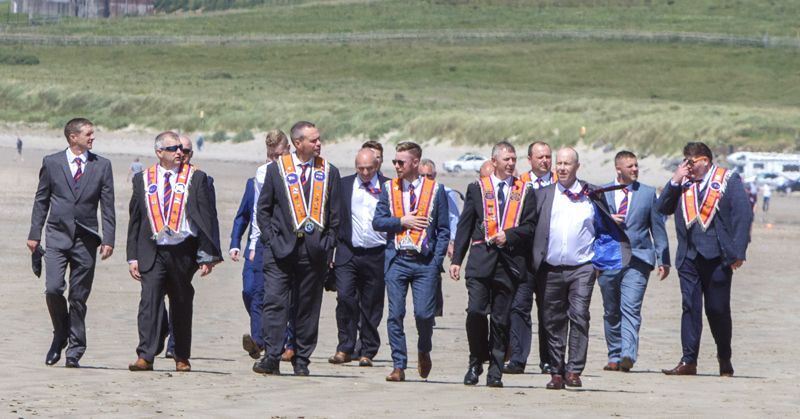 Gardai have warned Orangemen and women that those attending the Annual Orange Order Parade in Donegal this weekend could be left ‘all at sea.’

Thousands are expected to attend the event in the seaside village of Rossnowlagh on Saturday, July 9th.

More than 50 lodges from Donegal, Cavan, Leitrim and Monaghan are due to take part in the parade which is the first in two years.

Traditionally many attending park on the beach.

But Donegal Gardai have warned that those who do so this year could find their cars taken away by the tide.

A spokesperson said “The tide is expected to be in at 2.45pm that day and this will greatly reduce the parking space on the beach.

“There is also a risk that unattended cars will be flooded. Visitors are asked to attend early and use the designated car parks.

“All buses attending the event are requested to travel to Rossnowlagh via Ballyshannon. Please comply with the parking directions of Gardaí on duty.”

The parade in south Donegal is the only annual Orange Order parade in the Republic of Ireland.

Looking ahead to the parade, the Orange Order said: “It is expected that upwards of 50 lodges from Donegal, Cavan, Leitrim and Monaghan, as well as visiting Orangemen from Northern Ireland and further afield, will take part in the parade which begins close to St John’s Parish Church at 12.30pm.

“The parade then makes its way down a narrow country road, thronged with onlookers, to the demonstration field, on the edge of the shoreline.

“The annual gathering is renowned for its family-friendly atmosphere and minimal security presence.

“A religious service, only yards from the rolling breakers of the Atlantic, will be held at 3pm. The service will be conducted by Rev Brian Russell, Rector of Drumholm Parish.

“A collection will be held on the day in aid of Orange charities. The return parade will leave the demonstration field at 4.45pm.

“Orangeism remains vibrant in the border counties. This year a number of bands and lodges from the Republic of Ireland will be travelling to Canada for the 200th anniversary celebrations in Toronto.”

Orangemen warned they could be left ‘at sea’ at annual Donegal parade was last modified: July 8th, 2022 by Stephen Maguire
FacebookTweetLinkedInPrint