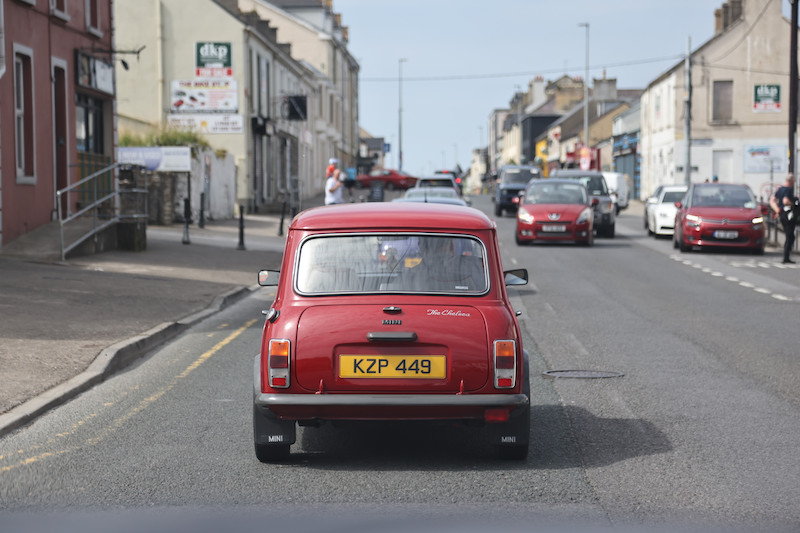 I could smell two Minis up ahead. They branched off at the roundabout to head around the bypass.

I knew then they were going my way.

There are two of them running in convoy – both are Donegal registration.

They seem to have a calming effect on passing traffic who slow up behind them for a mile or so taking stock of how small they are compared to the cars of today.

I thought it was the smell of Castrol R, an additive that racing and rallying mini car drivers would add to the fuel.

But it’s not really, it’s just the smell of petrol so I wind down the window and get the elbow out and just enjoy the fine Sunday weather.

Vintage and Classic Car Club,  proceeds of which will go to the RNLI. 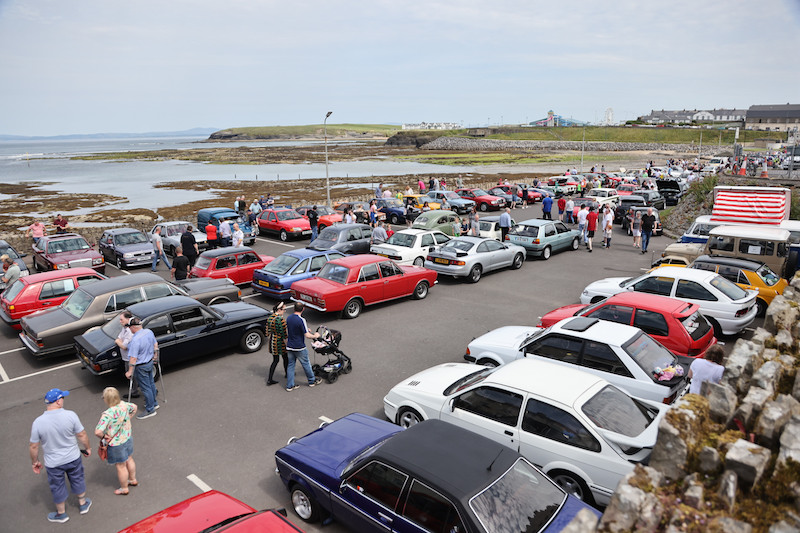 A view of the cars on show on Sunday in Bundoran.

The two minis turn off the bypass and head into Bundoran, then heading up the main street.

I travel this road a lot and like many, the most I see of towns like Donegal, Ballyshannon and Bundoran nowadays  are the finger posts from  the bypass that has gone around them for years. They all were so much a part of that road trip.

First it was the wee villages like Laghey, Ballintra and Bridge Town when they straightened the road between Donegal town and Ballyshannon. Then, them towns themselves were all bypassed on the main road from Letterkenny to Sligo .

In the old days it was 72 miles from Letterkenny to Sligo. I know this because it was the mileage that my fathers old Ford D Series ESB lorry recorded on its old analogue clock.

This was carefully filled into the driving  report at the end of every day.

On Sunday, I felt a wee bit like I was back in that old ESB lorry as an unofficial helper in the 1970’s  as I headed up the Main Street in Bundoran with my arm out the window looking around me in the height of the summer holidays.

We never went on summer holidays as wains, the nearest we got was day trips away with my father to Sligo where he would haul all the supplies needed for the maintenance of the ESB network in his trusty Ford D Series. 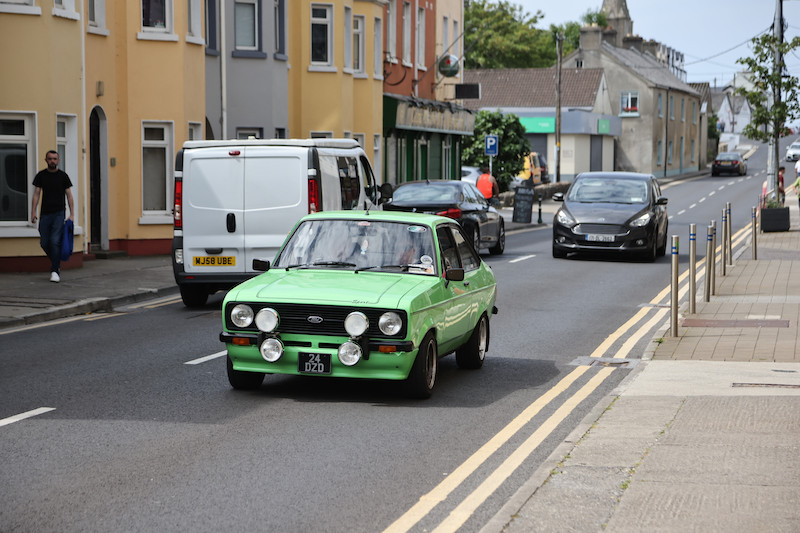 I’m keeping tight to the bumper of the Minis on my way up the street, much to the frustration of folk trying to push out into the traffic.

I’m not sure where this classic car show is on, but knowing these two classics in front of me will take me to the destination.

Then along the shorefront a man in a ‘don’t knock me down’ high viz jacket steps out to the middle of the road and guides the two minis down to a car park below the road.

I make my way past and look for a parking space a few yards up the road and stroll back to the carpark.

Suddenly, I feel like a tourist as I walk along with folk out for a Sunday morning walk in the sun.

People pushing prams, older folk on walking sticks, people recovering from a night out on the town.

There’s nearly as many looking down from the wall above the car park along the promenade as there are down around the cars that have made a donation to the RNLI boxes at the entrance.

‘How much is it to get in’ I ask the man in the gate sitting on his fold up summer seat.

Ah it’s a fiver but you can give what you want, he replies. 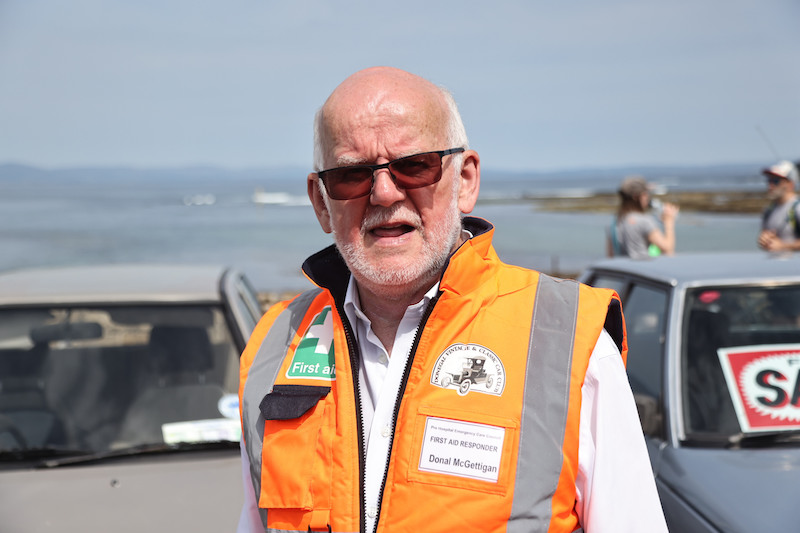 Donal McGettigan, one of the organisers a the show on Sunday.Photo Brian McDaid

There is such a good selection of nuggets of motoring history in that car park all neatly parked, each owner proud of his own pride and joy and full of respect for the cars parked alongside them.

You can smell the leather or leatherette in the heat of the summer sun and can just remember how them old seats stuck to your legs in short trousers as a child.

Some have their bonnets up on the cars, showing off a beautifully polished engine.

Everything gleaming, chrome rocker covers all shining in the sun then I see an old Escort sitting with its original 1600cc crossflow engine which was standard in the 1600 sport and the Ghia back in the day.

It reminds me of an old white Escort Ghia which we had done up the engine in at the back of my friends home in Wolfe Tone Place.

The car has replaced the old tin breather box with one of the K and N Pancake Filters of the time.

It was supposed to make the car more powerful but more important at the time it made the car sound more throaty while the twin downdraft Weber carburettor was at full throttle.

Those engines were very basic and easy worked on and looked great under the bonnet of this original Ford on Sunday. 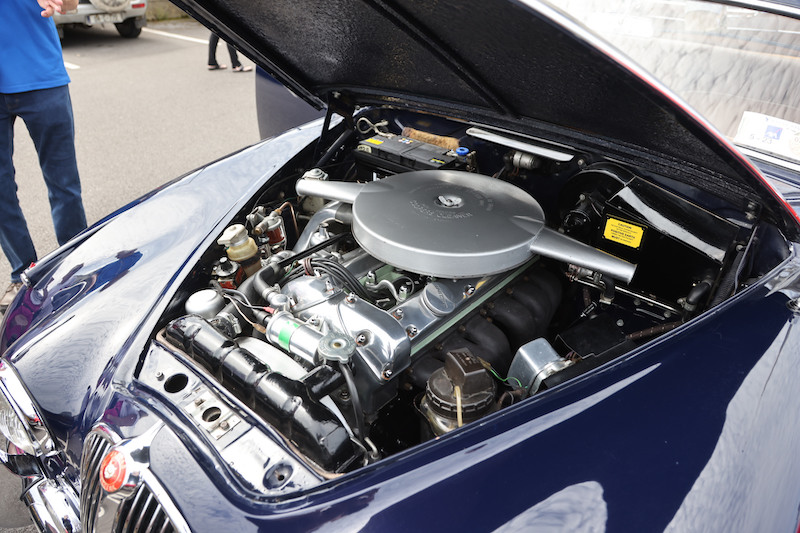 Under the bonnet of the show winning Jaguar at the show on Sunday. Photo Brian McDaid.

Three beautiful Hilman/ Singer Imps were parked beside each other looking very unique, a square shape of their time.

I didn’t find it until an hour passed, lost in the past looking at these fine old cars and as I was leaving to head home there were still a few late comers arriving as marshals directed them into a few tight spaces.

On the way home, I headed down the old road past Finner Army Camp and into Ballyshannon.

I recently found an old album from the late Larry Cunnigham on Spotify which I play when I am driving.

Years ago we had a recording  of his which we played on an old tape recorder at home.

All the songs he sang were the same songs my father sang.

Songs like Lovely Leitrim, Pretty Little Girl from Omagh, The Isle of Inishfree, Waltzing on the Top of the World, and the Old Bog Road to name just a few. 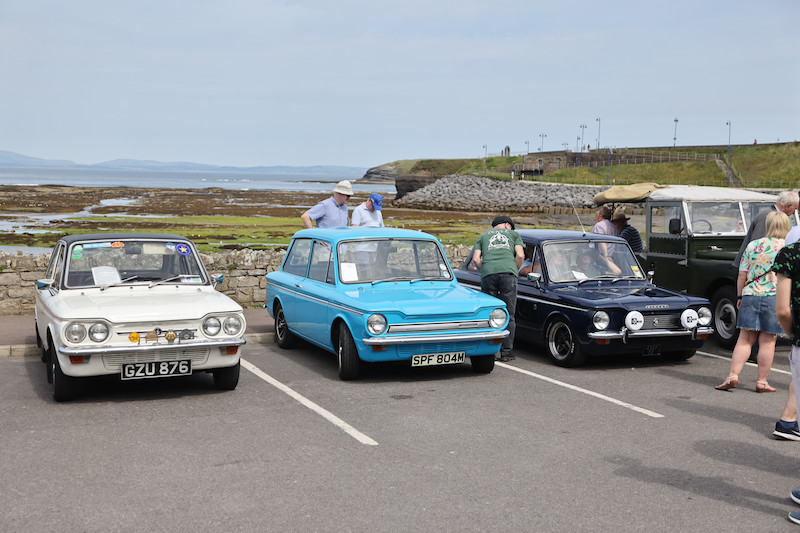 A row of Hillmans and Singer Imps on show in Bundoran at the weekend. Photo Brian McDaid.

Before I know it, I’m singing along to this brilliant singer as I head up though Ballyshannon on the man Sligo the Letterkenny Road.

As I head around the roundabout there is that lovely  smell of petrol again in the air.

I head on down the road and call in for a coffee in Kee’s of Laghey and get a lock of diesel for the van.

Looking for something in the back, I spotted the hedge cutter that I hired out for the weekend but had to abandon the idea on Saturday evening because of the heavy rain in the middle of or so called heat wave.

The hedge cutter, still in the van, had rolled over in the back and petrol vapour seemed to be leaking out of it.

This was the smell of petrol I was getting and assumed to be coming for the two classic Minis on my way up the road.

When I got home the day was good and as the hedge cutter was on hire to Monday morning, I started at the hedge.

When I  finished and switched the engine off, I could hear a friendly neighbour of mine calling into me.

You missed a bit there Brian. Missed a bit I laughed to myself, sure I nearly missed the whole hedge.