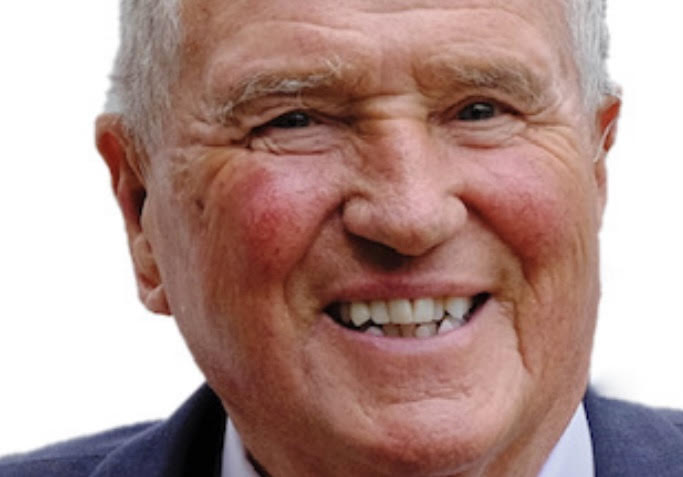 Last Saturday morning, there were a few milling about on the Main Street in Letterkenny. Nothing was organised, just wee personal journeys to say farewell to one of the people that made up the fabric of old Letterkenny.

The passing of Jimmy Dillon last week recalled a common connection that Letterkenny people have with their own town.

Along with his brother Bernie, he set up a great meeting place in Letterkenny that also doubled as a supermarket.

“I was speaking to such-a-one in Dillon’s” or “I ran into your wan in Dillon’s” were regular phrases used in Letterkenny years ago.

People got dressed up to go downtown shopping. It was a classic social occasion where the shopping was supposed to be the reason you went down the town, or up the town depending on where you lived.

It was always a Saturday morning for us, living from week to week, getting the messages from the wages that were paid on a Friday night to my father, who worked with the ESB a hundred yards or so from Dillon’s on the Port Road.

“Just the essentials”, my father would call when you were heading out the door. A big fiver or less was our budget for the weeks shopping in Dillon’s. 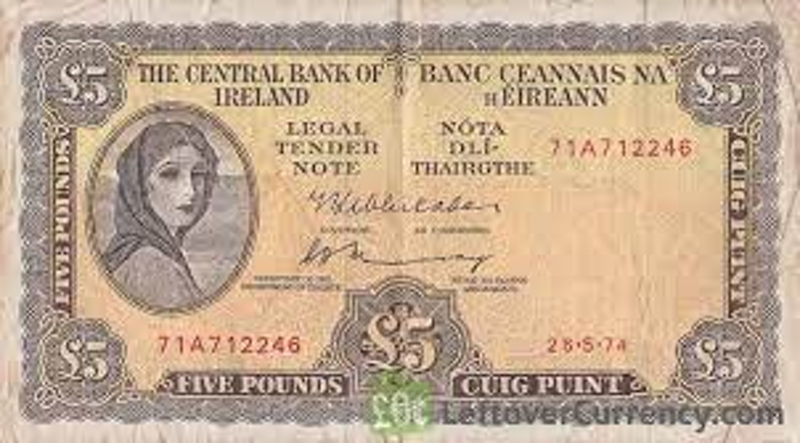 Budget for doing the big shopping in Dillon’s on a Saturday, five pound or less.

We got the same order every week; 2 lb. of Silver Side, a soup bone (the soup bone was never charged for if you were buying meat in Dillon’s), barley, lentils, carrots and celery for soup, butter (if it was on offer as a special), the same for bread, Lyon’s tea (tea leaves not tea bags) and sugar. Maybe a jar of Bo-peep black currant jam, and a packet of Boland’s cream crackers, The cream crackers were for a diet that my father devised for himself to try and cut down on bread.

In the 60s and 70s, Dillon’s was the first big supermarket in Letterkenny. But for us growing up in Glencar, Jimmy Dillon and his young family were also our neighbours living across the main road from us.

It was an era when there were so many children playing football or rounders in ‘the green’ in front of our houses, that they never had to cut the grass once. Every so often, a ball would end up in someone’s garden, someone would come out and give out to us, but Jimmy would come out and take the ball back across the main road again to us.

Sometimes he would completely surprise us.

One evening, he was just coming home from work and the ball hit his old Simica car as he was parking in his driveway. 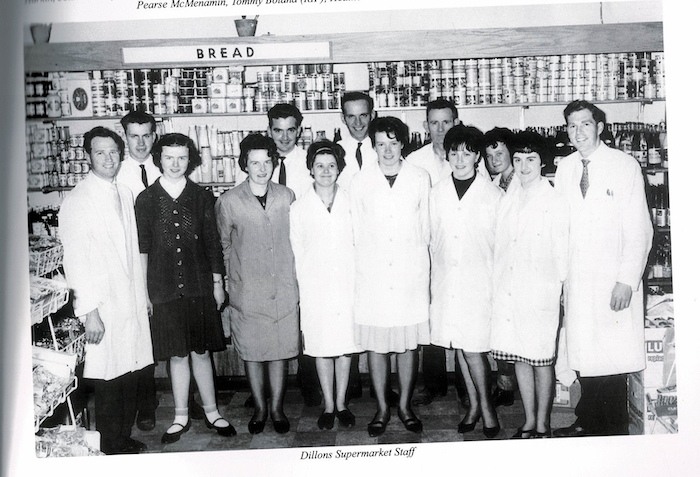 An early picture of Dillon’s Supermarket staff with Jimmy and Bernie Dillon.

Jimmy headed across the road with our ball under his arm, still in his shop coat and we were expecting a telling off  but he joined in on our game, flying around ‘the green’, his shop coat blowing in the wind and us trying to tackle the ball from him.

Jim whisked past everyone faster than the way he whisked through the shopping aisles in Dillon’s before hitting the ball through our makeshift nets of jumpers and coats. Then, he strode back up through the green up to his home with a big smile on his face.

Over the weekend, Jimmy’s wife Mary recalled her friendship and a customer of ‘Fashion House 27’. Mary got her clothes made by my late mother Mary Ellen who was a dressmaker in our home at No 27 Wolfe Tone Place.

The names Dillon’s on the hotel that replaced the old supermarket is the only memory left, as someone pointed out on Saturday morning, waiting for Jimmy’s funeral to make its way down the Main Street. 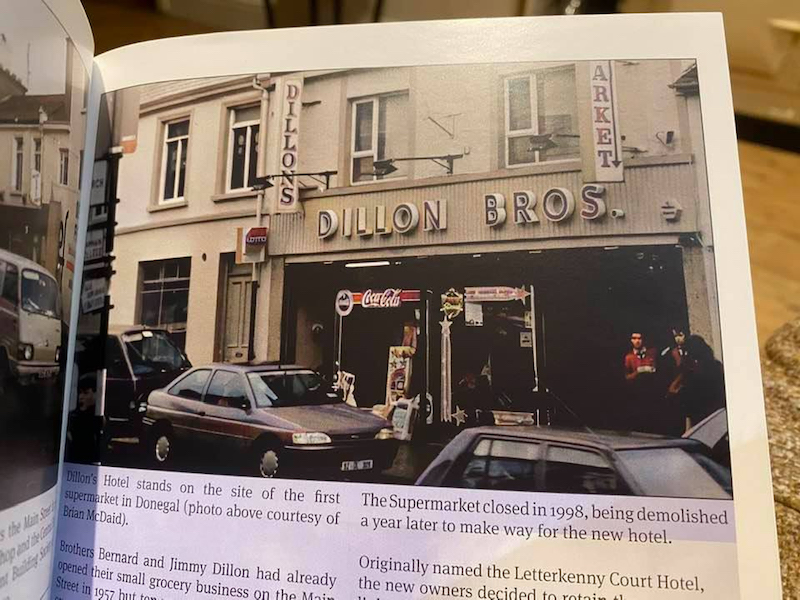 You know your getting on in years when you see an old photo you took in black in white over 30 years ago colourised, This is the picture which someone changed to colour to capture what Dillon’s looked like back in the day. Photo Brian McDaid. 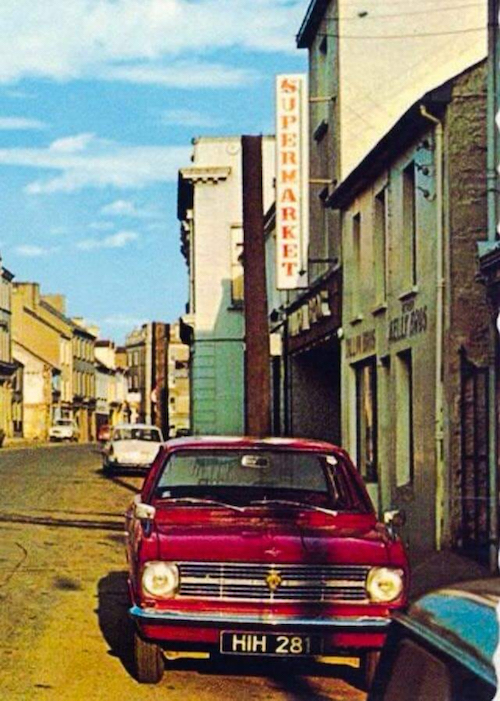 A picture taking by the famous John Hinde of the Main Street in Letterkenny on a postcard with Dillon’s Supermarket in the background and my grandfather new Opel Kadette in the foreground. .

The hotel that bears the name is nearer to where Roddin’s Pub was years ago, something that the local undertaker Pascal Blake respected, stopping at both locations outside the hotel sign and then at the foot of the Church Lane where the entrance to the shop was.

We once got a spade with the green shield stamps that we received from shopping in Dillons. We seemed to be saving for it for years, then we sent away the books of stamps and a few months later the spade arrived. We had it for years. 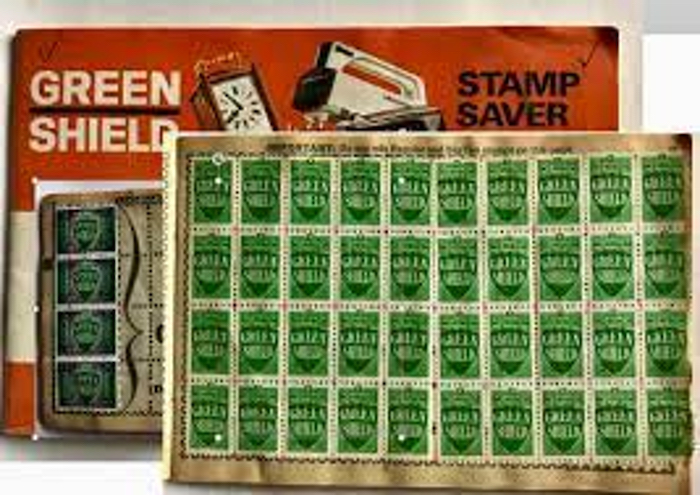 My father and his brother Pat lived three doors apart in Wolfe Tone Place.  They were always getting the loan of each other’s tools so much so that each other didn’t know who owned what. The green shield stamps spade was the only item that never was contested. “That’s my Green Shield Stamps spade Sir,” my father would always remind his brother Pat if he had it out on loan. We got it in Dillon’s, he would add.

On the run into Christmas  a few years ago knowing that Dillon’s Supermarket was soon to close, I got my children to go in and buy a few tin boxes of biscuits for Christmas presents for an aunt and uncle of mine. They picked them from a big stack of boxes near where the old office was once located  with the two steps up to it.

I made them go through the checkout and pay for their purchase themselves and we then took them home and wrapped them up and  delivered my uncle Pat in Wolfe Tone Place – my aunties  Bida  and Jenny at the foot of the town. When the word of one of the Dillon’s had passed away last week one of my sons asked if it was the same place  where we bought all the biscuits one year. 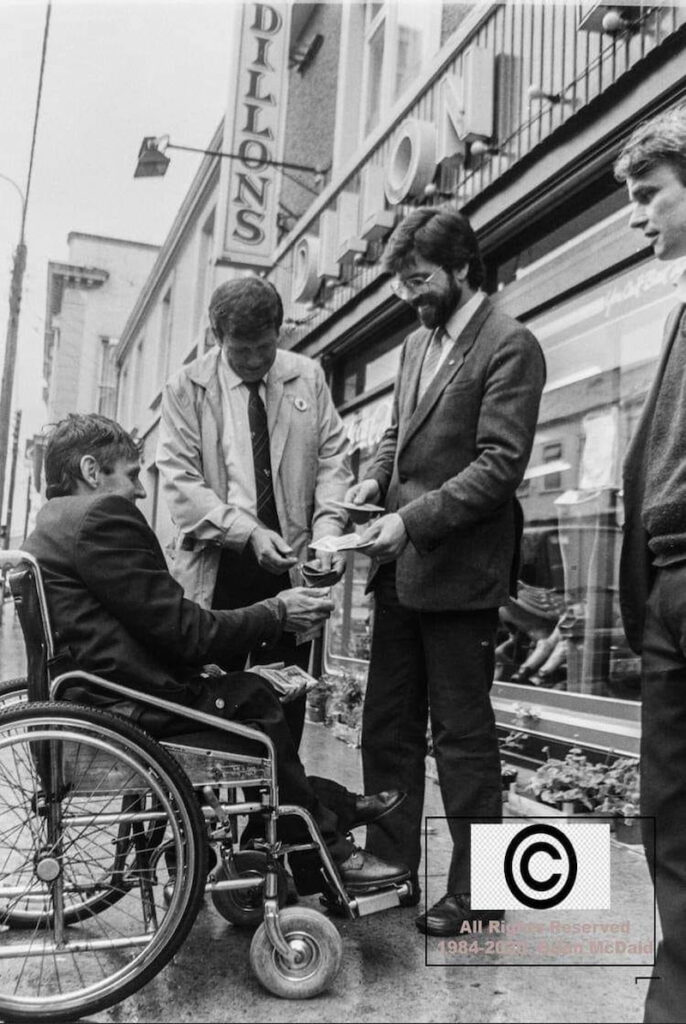 As a news photographer from Letterkenny working for the Donegal Democrat, I took a good few photos of the changing face of Letterkenny, and even have an old postcard by John Hinde which has Dillon’s in the background it with my Grandfather’s  Opel Kadette in the foreground.  You never think you will miss an old part of the town until it’s  gone, sadly I was on the Main Street the Sunday morning to capture  the digger move in to demolish our old supermarket.

Some of us old townies feel a big part of the town we once knew went for ever when Dillon’s closed their doors for the last time. They gave us great memories of people that worked there for years, images of folk heading out the door with a box of messages under their arm for me carrying two shopping bags, that would nearly cut through your fingers before the handle would give, heading up past the mart with the shopping on a Saturday afternoon. 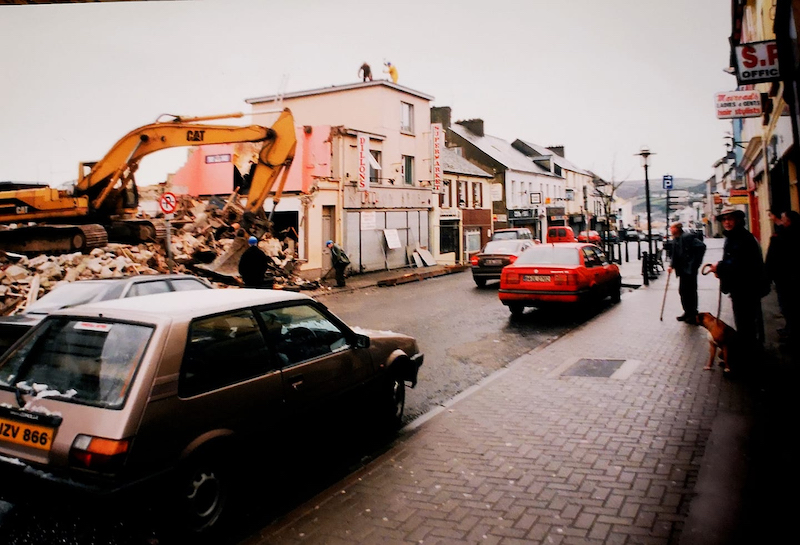 Dillons Supermarket on the Sunday morning it was brought to the ground. Photo Brian McDaid.