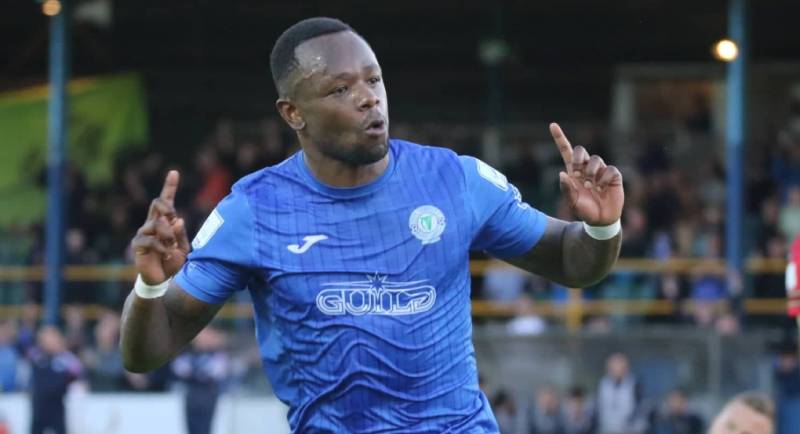 Eric McWoods was on form as Finn Harps returned to winning ways with a long overdue but impressive Premier Division win over Drogheda United at Finn Park.

McWoods scored twice and won the penalty which Filip Mihaljević converted to make it 1-0.

Harps took the lead halfway into the first half when Eric McWoods was fouled in the box and after a long delay, Mihaljević stepped up and placed the ball into the bottom right corner of the net. 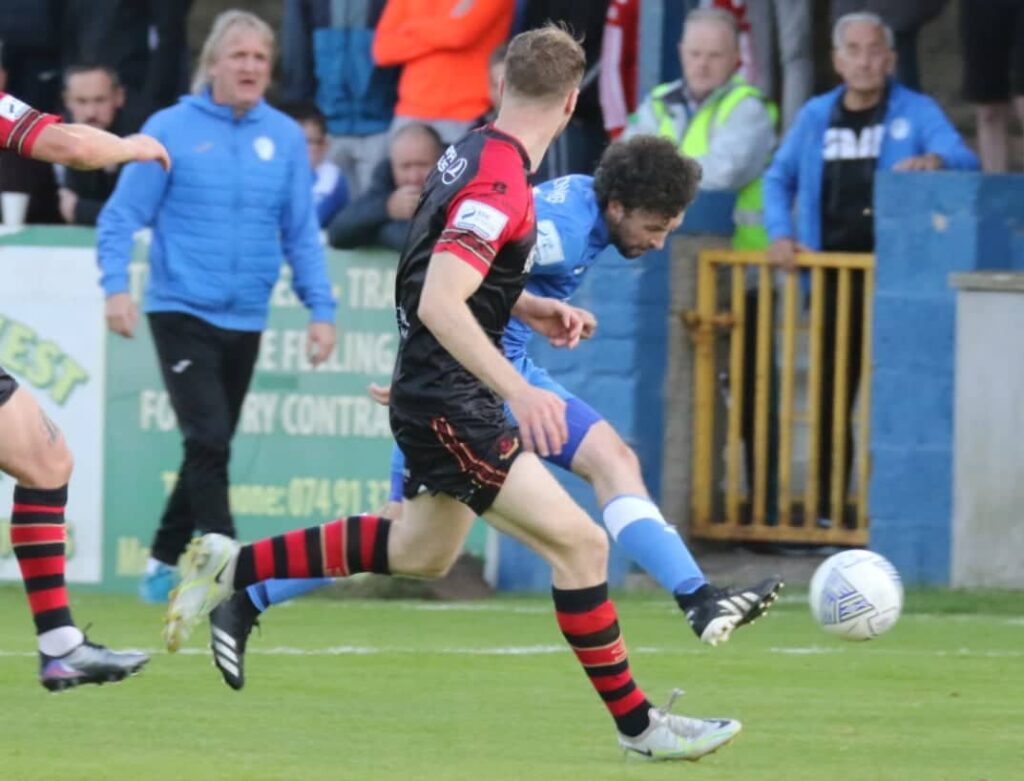 Harps made it 2-0 just before half-time when Mihalejvić played in McWoods and the American took a touch to set himself before sliding the ball past Colin McCabe.

McWoods got his second just before the hour mark as he headed home a Regan Donelon cross to move Harps back to 9th after their third win of the season.

Having lost 3-1 to Bohemians last Friday in the FAI Cup, the sole focus for the Donegal side for the remainder of the season is survival, with two big games against the two sides directly above them in the next seven days. 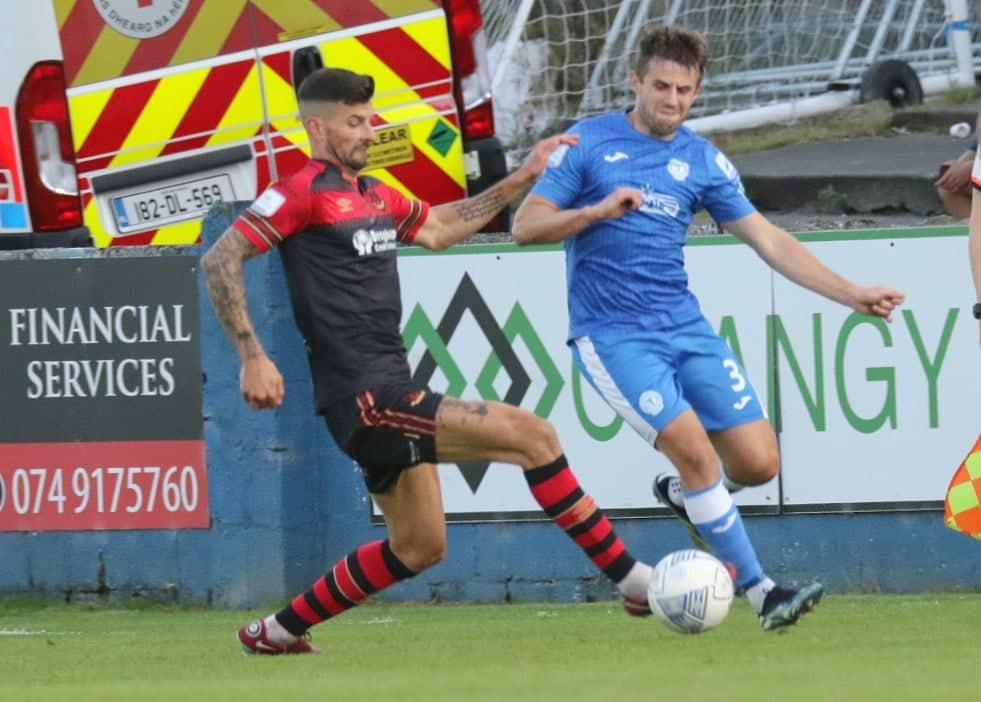 Élie-Gael N’Zeyi and Regan Donelon returned to the starting side in place of Ryan Rainey and Robert Jones.

Meanwhile, Drogheda made with Evan Weir returning from suspension and Chris Lyons coming back into the first team, while ex-Finn Harps defender Keith Cowan isn’t in the squad and Dean Williams drops to the bench.

Both sides made chances early but the visitors looked livelier at the off, with Chris Lyons having a header go just wide after good play from Dayle Rooney and Darragh Markey. 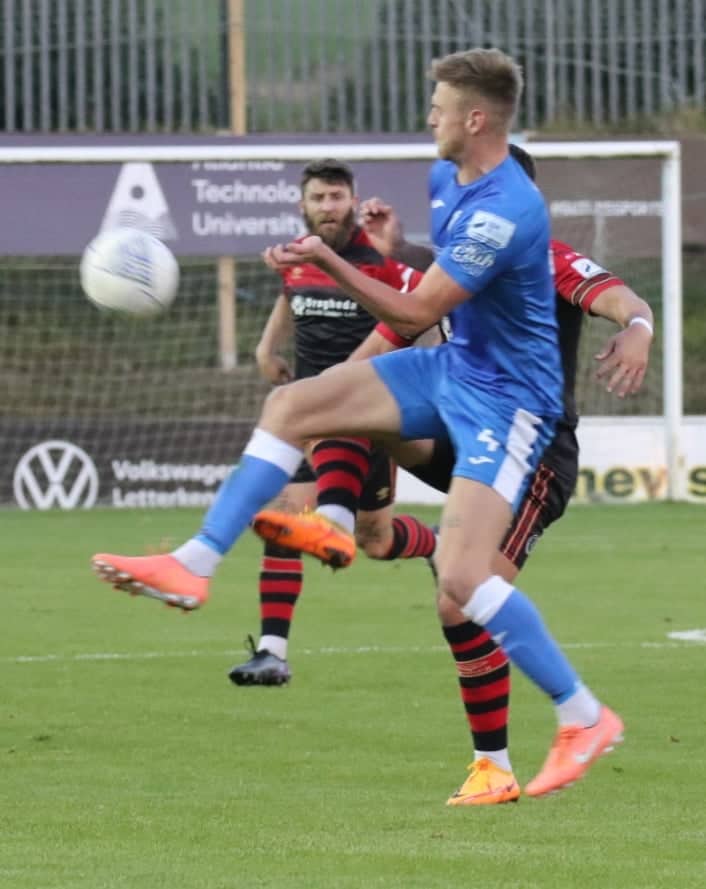 A counter attack after a Harps long throw saw Ryan Connolly get caught with three Drogheda players on the attack, but the resulting shot after Lyons broke away was saved by James McKeown.

Darragh Nugent then hit the post with a shot from outside the box.

But Harps grew into the game with McWoods and Mihaljević getting in behind but McCabe narrowed the angle to save on both occasions. 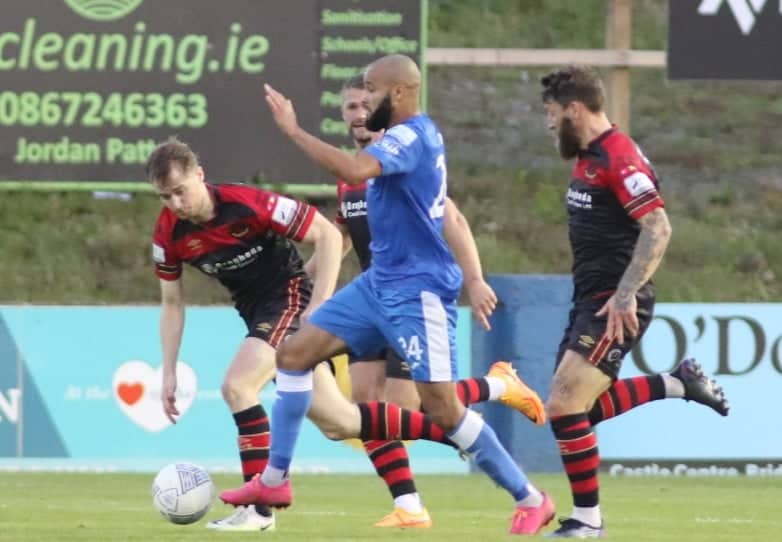 Drogheda again had a quick counter attack, this time from a Harps corner, but Barry McNamee did great to get back and block Markey’s shot, while the Drogheda man will be disappointed not to hit the rebound on target.

Harps took the lead halfway into the first half when a long ball found McWoods in behind the Drogheda defence and as he cut back, his leg was swooped by Andrew Quinn with Damien McGraith pointing to the penalty spot.

Mihaljević stepped up to take the kick and placed it right into the bottom corner, giving McCabe no chance as the Croatian got his fourth league goal of the season. 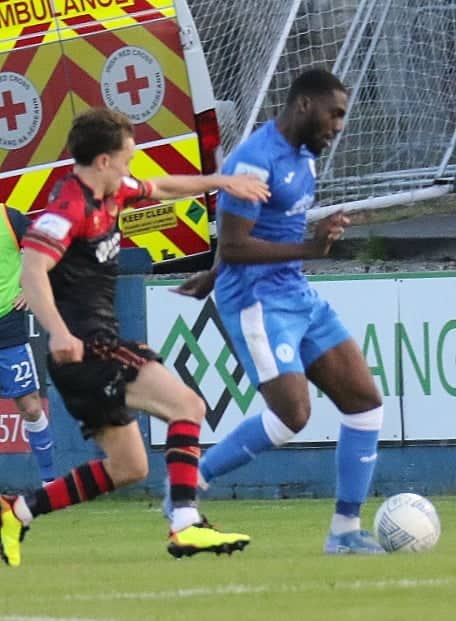 Harps continued to press and McWoods had a header go wide while the American turned provider for Mihaljević but his header into the ground was saved again by McCabe on the half hour mark.

Seconds later at the other side Ryan Connolly crossed to Mihaljević but his glancing header went inches wide.

The game turned a bit scrappy for the next 15 minutes but when Drogheda tried to counter attack, Conor Tourish broke up the play and when Mihaljević picked up the ball, he played McWoods in who took a touch before rolling the ball into the net to make it 2-0 at half-time. 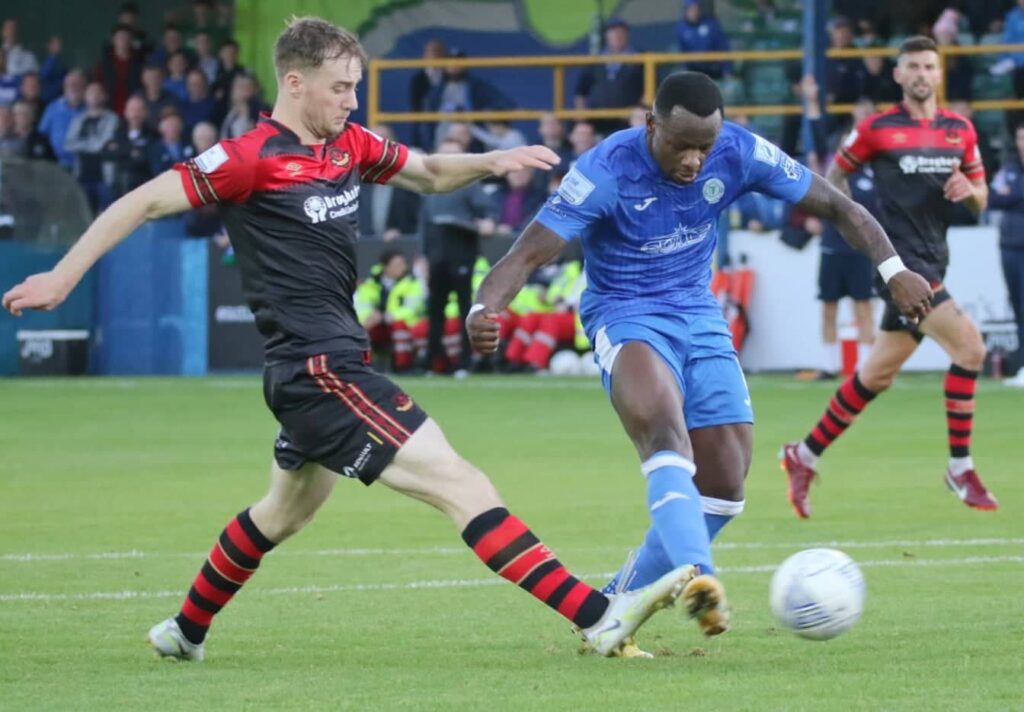 Kevin Doherty brought on Ryan Brennan at half-time and the former Shelbourne man created plenty of problems for McKeown and the Harps defence, as his shot in the box was on target but McKeown got down quickly to save.

Moments later however, it was 3-0 to Finn Harps after some great work by Ethan Boyle.

The defender ran from right to left and found Donelon whose cross found Eric McWoods in between the Drogheda centre backs and he headed high into the net. 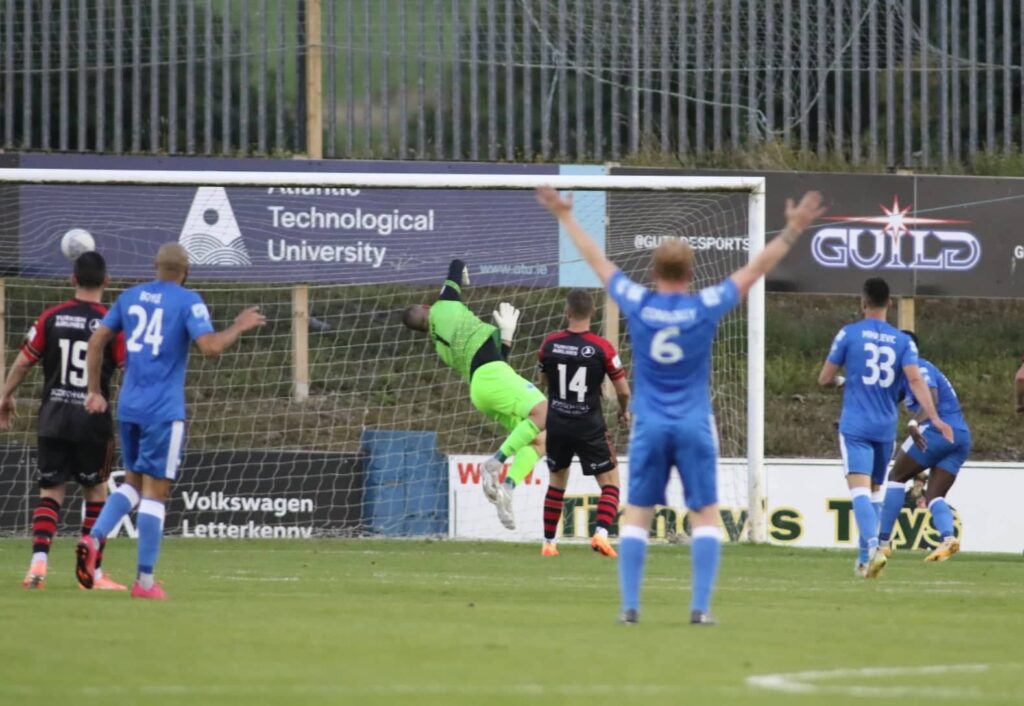 Brennan had a couple more chances as Drogheda didn’t give up, firstly Slevin making a brilliant block before McKeown made the save of the game as Brennan flicked towards goal from a Rooney cross.

But the three goal margin effectively finished the game as both sides had few chances in the final 15 minutes, with Harps defending well and controlling the game.

Harps move back up to 9th place after falling to bottom of the table for four days, and are now two points above UCD who they face next Friday at the UCD Bowl. 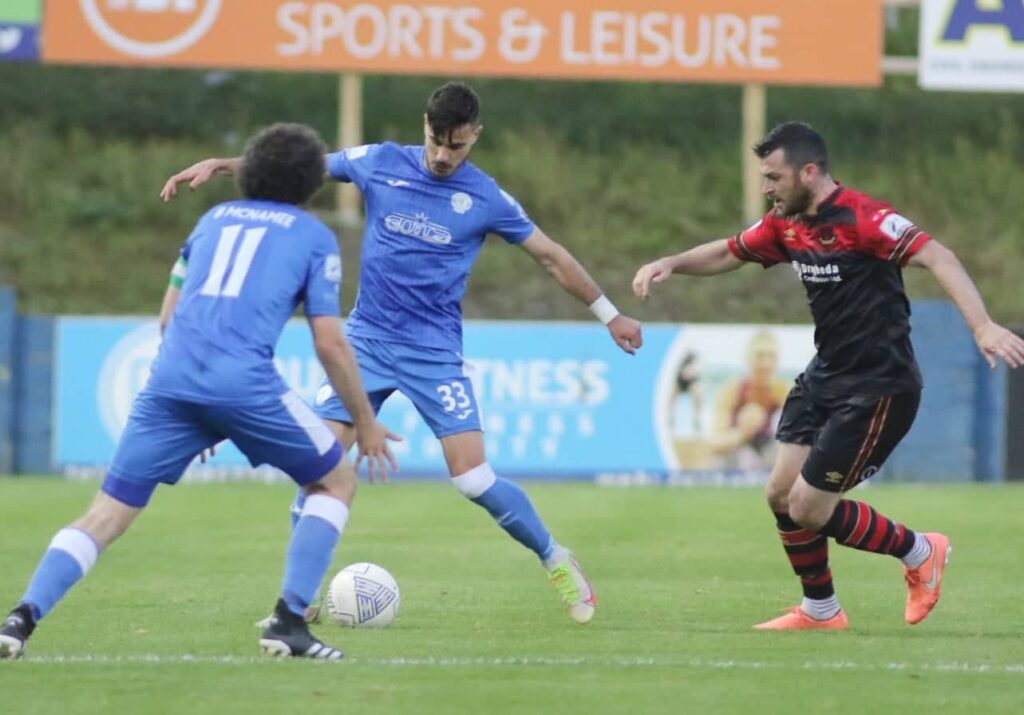