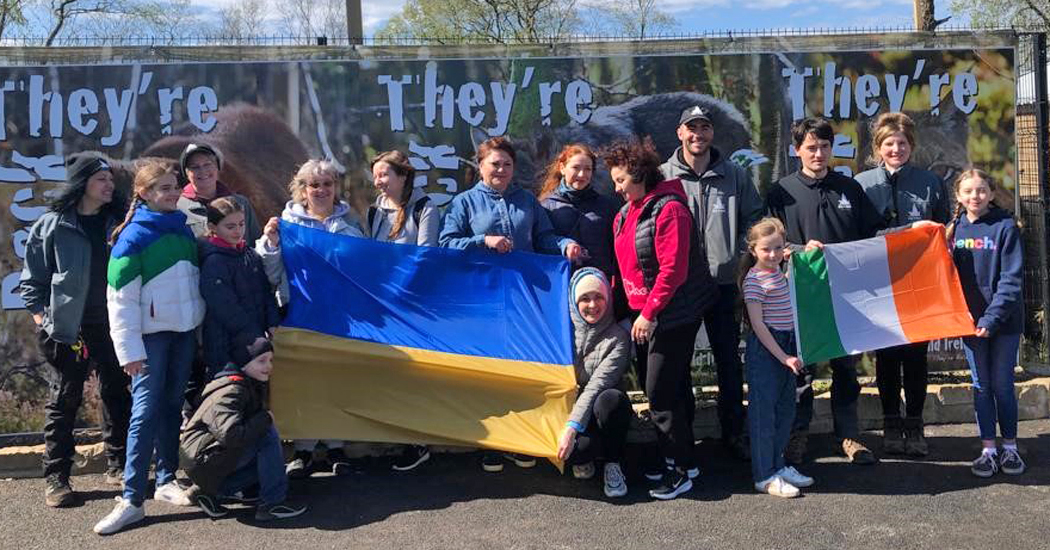 UKRAINIANS settled in Inishowen have been humbled by the kindness and generosity shown to them by the people of the peninsula, a community worker who is supporting them has said.

Community Development Officer with Inishowen Development Partnership, Barry McLaughlin, said the community response to Ukrainians who have come to Donegal has been overwhelmingly positive.

To date around 300 Ukrainians have settled in Inishowen, with more expected in the coming weeks.

“The immediate response of local volunteers highlights the sympathy and humanity of locals to those fleeing conflict in their home country”, said Barry.

“The nature of the conflict, with men of ‘fighting age’ remaining in Ukraine, has resulted in the arrivals here in Inishowen being predominantly women, children and older people. I think this situation and news broadcasting of the conflict has garnered greater sympathy towards those fleeing the conflict.”

As well as the humanitarian side of things Barry said that visiting Ukrainians are highly skilled and are adding to the Inishowen economy by both working and spending money in the local community.

“Individuals based in Inishowen from Ukraine have availed of support into employment, including English classes, and a number are employed within Health and Social Care & the Hospitality sectors.”

Emily Graham from IDP’s employment services sector has been involved on the ground providing employment and CV support to the Ukrainians, as well as giving them access to computer and printing services within their local hubs.

“We have a number of Ukrainians working in our health services and hospitality industry locally – both areas where businesses found it so difficult to recruit people this summer”.

“Employment opportunities has been a focus for Ukrainians since they arrived,” added Barry.

IDP are now recruiting three bilingual Ukrainian support workers who will act as support persons for Ukrainians fleeing conflict and are now based in the Inishowen hubs of Malin/Carndonagh, East Inishowen and West Inishowen [Buncrana/Burnfoot].

The successful candidates must have fluency in Ukrainian, Russian and English and have a professional background, with IT skills.

Once hired, the support worker will link with the local agencies and community groups to co-ordinate day to day activities, organise support, provide advice and guidance and accompany them for translation purposes when required.

Joint CEO Shauna McClenaghan, explains that a key part of the support worker’s role is to link with essential services and supports into employment.

“We expect that, as numbers increase, more Ukrainians will join the workforce and we must also be aware of emerging trauma as the conflict continues,” said Shauna.

“We want the support workers to work with Ukrainians within the hubs and link them with the support they need.”

Currently, various agencies are working along with IDP to provide as much support as possible. The main concerns that are repeatedly mentioned, however, are language and transport barriers.

Donegal ETB ran a number of adult English language classes, however, most have now ceased for the summer holidays. Formal Adult English classes will begin again in September.

Anthony Doogan, principal of Moville Community College, made the decision to keep the school open to support to local Ukrainian families living in East Inishowen, namely Muff Moville and Greencastle.

He said when attended an initial meeting at the Mullen Hope Centre, prior to their arrival, language was identified as being the biggest barrier to their integration within the Moville community.

“It was easy for me to keep part of the school open – Donegal ETB then came in and provided two tutors and we have numerous local volunteers coming in every day to provide language support,” outlined Anthony.

“Lessons will continue every Monday, Wednesday and Friday from 10am until 12.30pm until August 19. We have around 50 adults and a number of teenagers coming to us, as well as this we have arranged for younger children to be looked after at Blossom Academy in Greencastle.”

He described the community support in Moville as a ‘combined effort’.

“We have a very significant support group in Moville and have never wanted for volunteers. We have a responsibility to support these people under UN regulations, however I feel this is being done in Inishowen in a very wholesome and fulsome way.”

Similarly, in Malin, where the first Ukrainians landed nearly six months ago, the community spirit is still alive and well. There are now around 90 Ukrainians living in and around the Malin area.

Trish McLaughlin, who is co-ordinating the Malin hub support group, said the community team on the ground have worked tirelessly to help settle the Ukrainians in Malin. She said there are a number of young children enrolled in local schools, with more expected in September.

“We have two in Malin Head school, nine in Malin Town and five in Glengad NS,” explained Trish.

“There are also a number of teenagers in Carndonagh Community School.”

Crucially, Trish pointed out that transport still remains a massive issue for the Malin-based Ukrainians, who often need to travel for work, social and educational activities.

Eamonn Ryan who is the newly appointed REALT [Regional Educational and Language Team] within Donegal ETB said they are working with all local schools and Bus Eireann in ensuring that all the Ukrainian children can get registered with the most local school as possible.

However, he said there are also challenges in terms of available school places, but he said they are working with various agencies such as Tulsa, NEPS [National Educational Psychological Service] and NCSE [National Council for Special Education] to ensure all the young peoples’ needs are met.

“We have had our challenges and expect more this coming school term, however we are working hard to ensure every child has a school place,” said Eamonn.

“Bus Eireann have been great so far and have played a key role in meeting the needs of the Ukrainians who need school transport. But transport and access to health services locally remain a key issue. Unfortunately, GPs in Inishowen are also at or nearing capacity – they don’t have the resources to take on more people. But aside from that the response has been overwhelmingly positive and I hope that good will continues,” he added.

Meanwhile closing date for the Ukrainian support worker roles within IDP is Monday, August 8. Anyone interested in applying can do so by emailing enquiries@inishowen.ie and requesting an application form or download from www.inishowen.ie.