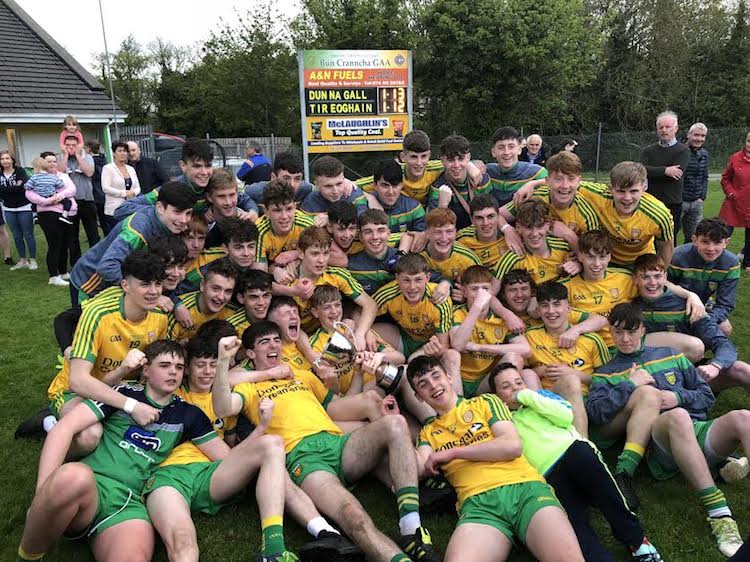 The 2022 Buncrana Cup final throws-in this coming Saturday at 12:30 between Donegal and Tyrone in The Scarvey, Buncrana.

This the 21st final and fittingly it will be contested by Donegal and Tyrone as the competition commemorates victims of the Omagh bombing on August 15th 1998.

The Buncrana Cup is an Ulster wide U16 Gaelic football inter county competition with a flamboyant history that has witnessed many stars of the future taking centre stage since its inception in 2000.

Donegal lead the table for Buncrana Cup wins sitting on 8 whilst near neighbours Derry come second with an impressive 4 wins but the story behind the formation of the Cup is down to a somewhat subdued but thought-provoking culmination of events that took place in 1998.

August 15 of that year will live long in the memories for many, and for the wrong reasons. On that day, 29 innocent people tragically died in the deadliest single incident of the Troubles – the Omagh bomb. Sadly, three of the victims of the Omagh bomb were from Scoil Isogáin in Buncrana, Oran Doherty (8), Sean McLaughlin (11) and James Barker (13), along with two of their Spanish friends, Rocio Abad Ramos (23) and Fernando Blasco Baselga (12), who were on a cultural visit that day, on a cross-border excursion to Omagh.

As a result of the tragedy, three men from Donegal took it upon themselves and along with the local GAC to set up the Buncrana Cup as a mark of respect to the young men from Buncrana and their Spanish friends who died.

The final of this now prestigious tournament has always been played at The Scarvey, Buncrana GAC’s pitch and this year’s 21st final will be no different.

This will be the 21st final as Covid played a part in the loss of two years. The three men who made the change were Michael McMenamin, Donegal Youth Officer, Martin McHugh, Donegal Academy and John McConnell, who was the County Chairman. Michael McMenamin told the Donegal GAA website the story of how the change came about:

“After the 1998 Omagh tragedy it was decided by Martin, myself and John McConnell, to set up an U16 Ulster competition in honour of those three local boys from Buncrana and their two Spanish friends who so tragically lost their young lives in the Omagh bombing.

“At the time when it was set up, it was a condition that the semi-finals would be played in Inishowen and that the final would always be played in Buncrana. In the first year, six Ulster teams competed for Buncrana Cup glory and in 2002, all nine Ulster teams entered the competition.”

The Buncrana Cup went from strength to strength and such was its success that in 2002 the Ulster GAA took over the organisation of the tournament, which helped ensure its longevity and prominence.

Over the years, many of the modern day prominent stars have played in the competition including Karl Lacey, Eamon McGee, Michael Doherty and Ronan MacNiallais – who all played on the Buncrana Cup-winning team of 2000. Derry’s Barry McGoldrick lifted the Buncrana Cup in 2001; and current Donegal player Conor O’Donnell, played in the 2016 final. It’s also worth noting that Everton and Republic of Ireland captain Seamus Coleman was also a Buncrana Cup winner with Donegal in 2004.

To this day and for many years to come, the memories of the young men from Buncrana and their friends who lost their lives will live long with all involved in the organisation and participation of Ulster’s greatest U16 Gaelic football competition – the Buncrana Cup.