Two late goals from Daire McDaid ensured victory for Termon in this keenly contested clash with Naomh Mhire at the Burn Road ending in a scoreline of Termon 2-13 Naomh Mhuire 0-11.

It’s still early stages in the Intermediate Championship but this was a key fixture for both teams.

By Charlie Collins at the Burn Road

Termon had let a six point second-half lead slip in Gaeil Fhanada last week and had to settle for a draw while Naomh Mhuire just held on to defeat Malin after also holding a comfortable lead early in the second-half.

Both have tough fixtures ahead in the next two rounds, so a win here was important, especially for the home team.

Just before the waterbreak Anthony Grant added his second, another cracking score but just after it Eoin Martin converted his second from a free to leave it 0-03 apiece. 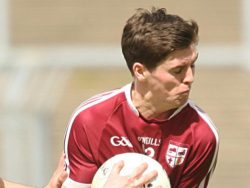 The home side suddenly moved up a gear and three points followed, all from frees , one from Daire McDaid and two from Steve McElwaine and the lead was three .

An excellent Steven Black score from play made it a four point game and Termon looked to have the bit between their teeth.

Anthony Grant with his third from play and Daire McDaid’s free made it six in a row for Termon and then just before the break Ryan McFadden’s long range effort made that seven and a half -time score of 0-10 to 0-03 to the Termon men.

James McSharry and Daire McDaid added early second-half points to extend the lead out to nine , Eoin Martin converted his third and fourth frees to leave it 0-12 to 0-05 and then points from play from Adam O Brien and Daniel Devlin left five between them , 0-12 to 0-07 , and just before the waterbreak Eoin Martin converted his fifth free , Naomh Mhuire’s fifth in a row to leave just four in it , 0-12 to 0-8 and game on.

Naomh Mhuire replied with a Ultan Boyle point to leave just three in it. Daire McDaid pointed and then rattled the net after the Black brothers combined to set him up for a close range finish and a seven point lead , 1-13 to 0-09 and Naomh Mhuire’s gallant comeback over.

McDaid slammed in another goal as darkness fell as an 8pm throw-in is now proving troublesome for grounds without floodlights) .