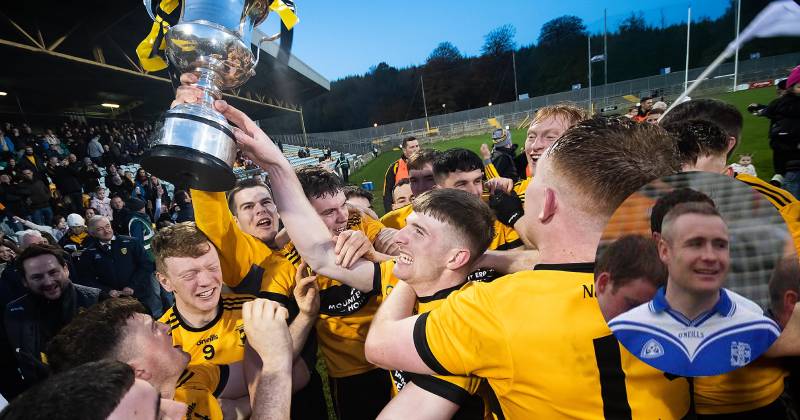 Former Donegal and Naomh Conaill star John Gildea has whittled down the Donegal Senior Football Championship to ‘the big three’, with St. Eunan’s slight favourites in his eyes.

Gildea, who won an Ulster Championship with Donegal, see’s Rory Kavanagh’s side as marginal favourites, but believes any of them, Kilcar and Naomh Conaill can win it on their day.

The Letterkenny men won their 15th title in 2021, their first for seven years and Gildea said people were foolish to write them off last year, and believes they deserve to go in to the Championship as favourites.

“Realistically, St. Eunan’s as defending champions, have to go in as favourites and their age demographic is good.

“Rory has done a very good job with them, they’re a very strong athletic team and on their day they’ll give anybody their fill of it.

“I think Gweedore have fallen off a little bit, they’ve found it hard to replace some of the bigger names. So then it comes down to Naomh Conaill and Kilcar and on any given day them three can beat one another, with Eunan’s as slight favourites.”

St. Eunan’s begin their title defence this afternoon, as they welcome St. Naul’s to O’Donnell Park, and Gildea believes they’ll be back at the top for a number of years, with their strength and the youthfulness of a lot of their squad making the future look promising for the black and amber.

Gildea believes that it’s the opposite for the Kilcar men, while the jury is still out for Naomh Conaill’s younger players coming through.

“The thing I like about St. Eunan’s at the minute is their age demographic. From a Kilcar perspective, they’ve been around a while and their better players are not what they were five years ago in their prime.

“It’s the same with Naomh Conaill but they’re in a major transitional phase now. We have a new younger generation coming through with Jeaic MacCeallbhuí, the Doherty’s, Charles McGuinness, and they have to prove their worth now and take over the mantle and if that happens Naomh Conaill will be there or thereabouts for years to come.”

The former county star thinks that his club have the tougher side of the draw compared to Kilcar and St. Eunan’s but expects them to make it through without too much difficulty.

Naomh Conaill travel to Glenswilly in their opening game tomorrow, while they welcome Killybegs to the Davy Brennan Memorial Park next weekend.

“Naomh Conaill probably have a harder side of a draw than the other two but in the grand scheme of things if you’re going to win a championship you have to win these games,” he said.

“Glenswilly aren’t the power they were five years ago but Killybegs will provide a sterner test, they’ve got a god set up but you’d still expect Naomh Conaill to come through both those games.

“But in any given stage there’s a lot of things that can happen that can determine how your Championship is going to go like Naomh Conaill last year.”

And while he does believe there’s not much hope for any outsiders, Gildea thinks there’s a couple of clubs who are on the up and could be a force to be reckoned with in a couple of years.

“At the end of it all you’re looking at the big three and Gweedore but I don’t see anybody outside the so called big four winning the Championship.

“At this given point they’re all ahead of everyone else in the county but there’s good work going on at Killybegs and Four Masters, they’re the two teams in the county that could shake things up in the next four or five years.”

‘Eunan’s the slight favourites of the big three’ – John Gildea on the Donegal SFC was last modified: August 13th, 2022 by Dáire Bonnar
FacebookTweetLinkedInPrint