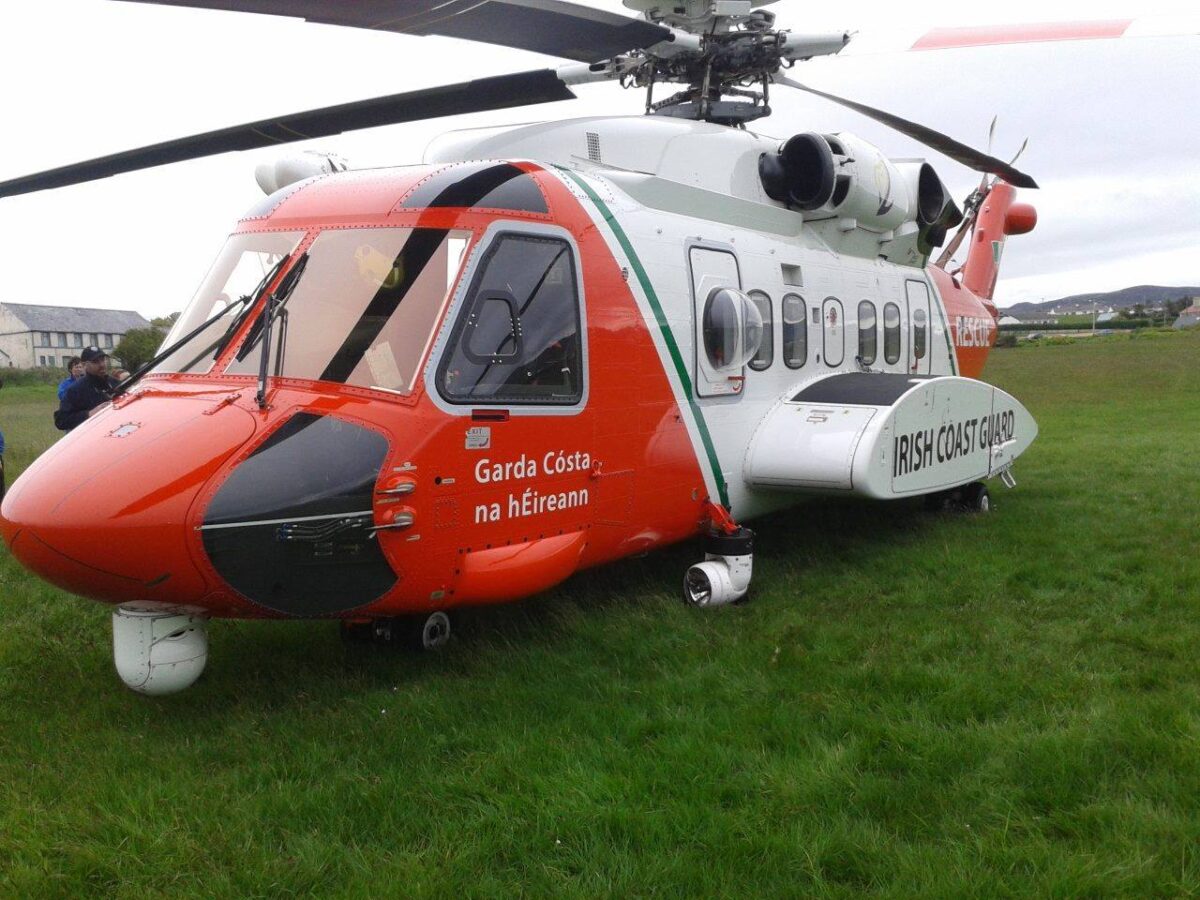 Killybegs Coast Guard and the Rescue 118 helicopter were in action during a busy week of incidents in south west Donegal.

As the sunshine brings more people to beaches and hills, emergency services have been tasked to several operations around the coast.

On Wednesday, a swimmer was saved from rocks at Muckross Head. Killybegs Coast Guard was tasked to assist a woman who became caught in a wave and washed up on rocks near the beach.

The rescue was made more difficult by the dangerous location of the casualty and the strength of the waves. Rescue 118 was also called to the area and had to do a ‘hot refuel’ to get to the scene from another mission. Just as the coast guard was setting up a cliff rescue system, the helicopter reached Muckross and dropped a winchman down. The casualty was lifted safely onto a nearby field and was assessed for injuries. The woman was not injured but was shaken by the events.

The next day, the Killybegs Coast Guard was called to bring an injured hiker down from Sliabh Liag cliffs. A rescue team hiked from the Bunglass viewing point to the boulder field, almost an hour up, to assist a person who had injured their leg. Rescue 118 was occupied at the time of the call, but later made it to the scene. Two members of Killybegs Coast Guard then assisted the R118 winchman as they were deployed down to the site. The hiker was safely secure on the helicopter to be airlifted to hospital. The rescue was an intense mission for the coast guard, who were working at a height in excess of 400m above sea level. Extra safety procedures were followed to battle the extreme down draft of the helicopter overhead.

As the coast guard descended from Sliagh Liag they were signalled by Malin Head Coast Guard to search for a missing hiker at Teelin. Rescue 118 and Bundoran RNLI were also in action on this mission, which turned out to be a false alarm with good intent. The kayaker was reported missing due to a miscommunication but was found not to be in danger.

A spokesperson for the Killybegs Coast Guard has urged people not to hesitate to make an emergency call if they think that someone is in difficulty.

Officer in Charge (OIC) Shane McCrudden said: ”If you think someone is in trouble. Make the call. If it turns out to be a false alarm it’s easy for us to turn back. It’s a good feeling to be stood down.”

McCrudden offered extra advice for people enjoying the sunshine this weekend: “We cannot stress enough the importance wearing lifejackets and personal flotation devices. If you are going out on the water, always let someone know where you are going and what time you will be back. Communication is also important, we recommend a combination of phones and VHF radio. You cannot rely solely on a phone, but if you bring one make sure to put it in a waterproof pouch. With a VHF radio, someone is listening 24 hours a day, 7 days a week for that mayday call or call for help.”

Last year was the busiest year on record for the Killybegs crew, who were dispatched on 44 rescues – 43 of them taking place between June and December.

Looking back on the busy week, a spokesperson for the Rescue 118 crew said: “With the exceptional weather, the crews of Rescue 118 have been busy all across the region. A number of island medivacs took place from Inishbofin, Inishturk and Tory Island along with a rescue of a swimmer near Muckross Head and an injured hillwalker on Slieve League.

“Thank you to the various agencies who assist us on these taskings. Over the course of a shift, we can be flying for extended period of time and have to carry out a rotors running refuel at the airport. This speeds up our response and enables us to carry on with the mission.”

If you see someone in difficulty on or near the water: Call 112 / 999 and ask for the Coast Guard.

More advice and guides to water safety are available on www.watersafety.ie