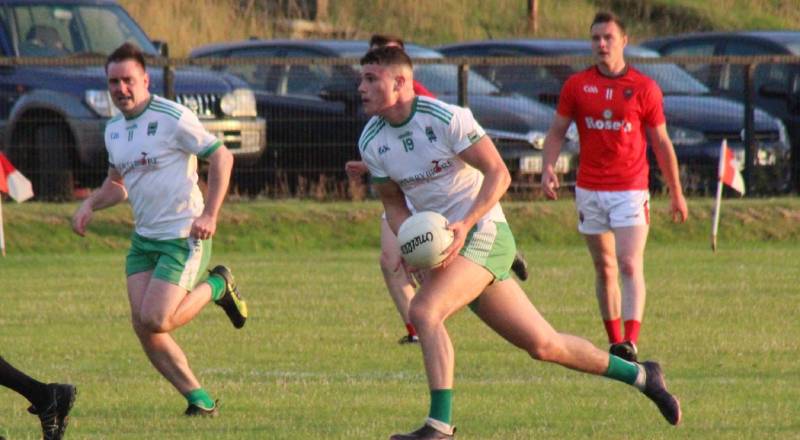 It was a good weekend of action as the 2022 Donegal Senior Football Championship got underway with five wins and three draws from the opening weekend.

Hugh McFadden had a brilliant game for the home side, finding the back of the net inside the first minute, and ended on a score of 2-6.

Glenfin had an uphill task to face, including being eight points behind at one point, while Conor Cunningham notched five points for the hosts who led 1-8 to 0-7 at half-time.

Luke McGlynn, Shaun Ward and Jason Morrow got ten points between them for the visitors and a Karl McGlynn goal had them right back in the game at 2-11 to 1-11 having been 2-10 to 0-8 behind.

Kilcar laid down a marker for the Championship with a thumping win over Milford, getting more impressive as each quarter passed.

Eoin McHugh and Ciaran McGinley got the goals for the hosts in the second half, with the Towney men having 10 different scorers. Kane Barrett scored 1-2 for the away side.

Eamonn Collum scored two first half goals for the hosts at Magheragallon as they led 2-7 to 0-2 at half-time.

Collum also notched three points as Ardara were looking well beaten by half time, but they equalled their opponents in the second half.

Gavin McBride scored 0-3 and Domhnaill Mac Giolla Bhríde and Cian Mulligan got two scores each for the home team, while Gareth Concarr, Paul Watters and Paul Walsh got two each for Ardara.

Last but not least, a local derby between the two South Donegal sides saw the hosts take the two points.

A dull first half saw Aodh Ruadh take a 0-3 to 0-2 lead in at half-time, but they quickly built on that.

A Shane McGrath goal and points from Diarmaid McInerney, Michael McKenna and two from Eddie Lynch had them 1-7 to 0-3 ahead.

Bundoran tried to come back and Gary Clancy converted three frees, but it was a comfortable win for the Ballyshannon side in the end.

The home side performed well and led 1-4 to 0-6 at the halfway point, with Alex McCalmont getting the goal while Jason McGee got a few scores for the visitors who would go ahead when Cillian Gallagher scored before the water break, making it 1-9 to 1-6.

Both sides got one last point but Four Masters found the back of the net thanks to Jamie Crawford, who scored 1-4, to draw the game.

It was a routine victory for the defending champions who went in at the break 0-8 to 0-4 ahead thanks to four points from Niall O’Donnell.

St. Naul’s could’ve had a goal in the first half but Conor O’Donnell made a great block from John Rose.

St. Eunan’s pushed on in the second half, and had seven players score one point each, while Shane O’Donnell hit the back of the net from close range, scoring 1-2, with Niall ending on 0-5. Peadar Mogan scored 0-5 for St. Naul’s in O’Donnell Park.

St Michael’s raced into an early lead at The Bridge, 0-5 to 0-1 at the water break with Michael Langan scoring three of the five, but MacCumhaills levelled to make it five apiece at half-time, with Oisin Gallen getting three of their scores.

Neither side led by more than a point until Langan fired into the bottom corner to make it 1-8 to 0-9 and Langan instantly pointed again but just after the water break Joel Bradley Walsh punched into the net from a Gallen sideline ball.

Joel’s 50 metre free levelled the game at 1-11 each but Langan could’ve won it late on but missed his free.

Glenswilly came out flying after their relegation to Division Two and were 1-2 to no score ahead, with Michael Murphy getting 1-1 of that.

But Naomh Conaill came back into it and were level by half-time after four points without reply, John O’Malley getting four of their scores.

Leo McLoone’s goal had the visitors ahead before Murphy converted a penalty following a foul on Shane McDevitt.

Ciaran Thompson at one end and Gary ‘Copper’McFadden at the other scored equally impressive final points for both sides as it was a stalemate, with McFadden receiving a red late on.

Round-up of results after the first round of the Donegal SFC was last modified: August 14th, 2022 by Staff Writer
FacebookTweetLinkedInPrint