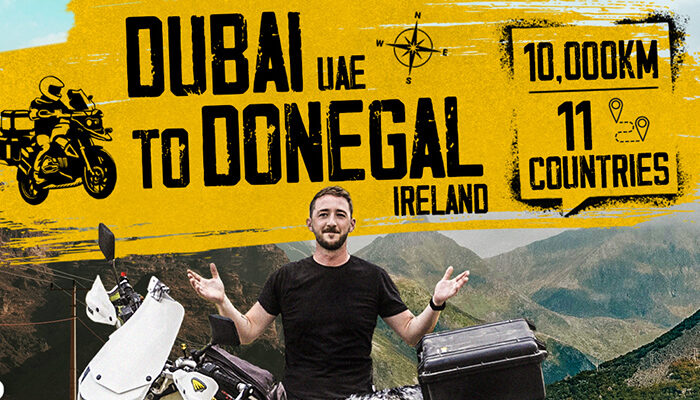 A Donegal man who last month embarked on a massive 10,000km Dubai to Donegal charity motorcycle ride, is hoping to finish the last leg of the cycle tomorrow, Saturday 20th August.

Killybegs native Evan Bourke is a producer at Euronews in Dubai and is a keen motorcyclist.

He began the journey on the 19th of July from Dubai and has endured tough conditions on his Suzuki DR650, spanning from temperatures in and around 50 degrees Celsius, to travelling over the Alps, and encountering some problems along the way such as a hold up at Iranian customs and forest fires in Greece.

Evan has had help from friends and strangers across the 11 countries he’s visited and is almost finished, making his way from Rosslare in Wexford to home in Donegal tomorrow.

The charity motorcycle is being done in aid of the Emirates Red Crescent, the UAE affiliate of the International Federation of Red Cross and Red Crescent Societies.

Evan said on the charity: “I’m very aware that I’m lucky to be in a position where I can make such a trip when many in the world could not. This trip to my home is under my own esteem and not a necessity. However, at least 27 conflict areas in the world today make families leave their homes to survive, whether physically or financially.

“They also respond to disasters in conflict zones because the effects of a disaster are compounded if a country is already at war. This campaign will help orphans in need.”