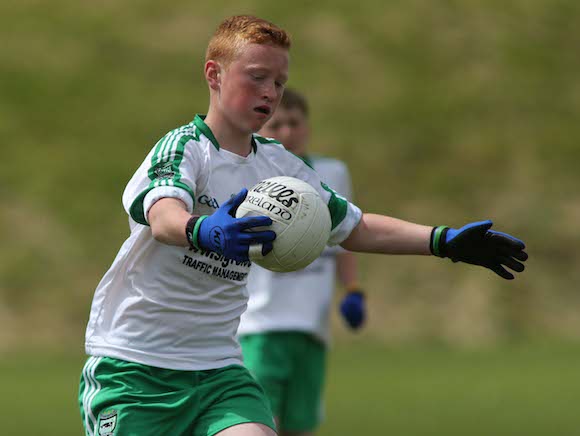 Sean MacCumhaills followed up the their draw at The Bridge against St.Michael’s with this solid victory over Four Masters to move onto three points.

By Charlie Collins in Ballybofey

The opening half produced an exciting end to end game with both teams prepared to take risks at the back in favour of going for their scores. That produced nine points in the opening 20 minutes.

Jamie Crawford got two of the visitors four during this period with Killian Faulkner and Senan Quinn adding the others , MacCumhaills led 0-05 to 0-04.

A moment of brilliance from Oisin Gallen followed as he grabbed possession near the Four Masters 45 metre line, shook off the attention of a number of defenders and raced into the 13 metre before blasting a low drive past Ryan Haughey into the net.

Bradley-Walsh and Gallen added further points , Crawford replied from a free and MacCumhaills led by 1-07 to 0-05 at half-time.

Killian Faulkner and Gavin Gallagher exchanged points in the early stages of the second-half and then Four Masters Alex McCalmont crashed a super drive off the crossbar with keeper Oisin Gallen beaten , James Duignan drove the rebound wide.

Senan Quinn kicked an excellent score to leave four in it, but Oisin Gallen’s free and a fine Kevin McCormick score from play made it a six point game, 1-10 to 0-07.

Gallen, Bradley-Walsh , Gallagher and Steven O Reilly added MacCumhaills points, while Jamie Crawford added two from frees for Masters but leave the final score 1-14 to 0-10 to the home side.

A confident MacCumhaills travel to take on Gweedore next week in Round Three, while Four Masters host Bundoran.