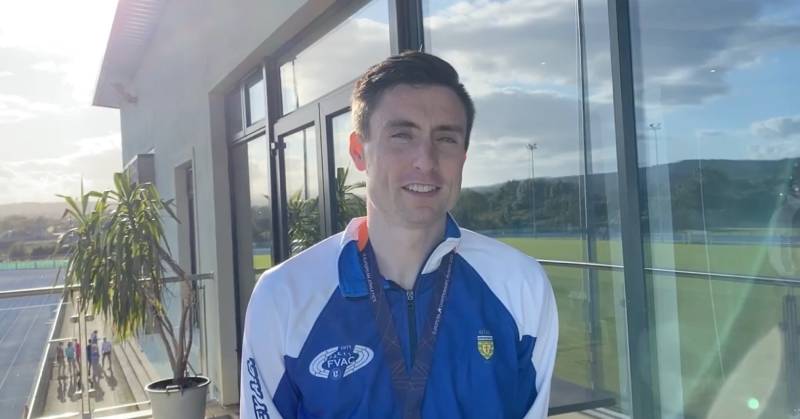 Watch: Mark English – ‘brilliant to see how many tuned into our sport’

Mark English was delighted with the backing Irish athletics has seen from Ireland and Donegal alike as he returned from the European Championships to a crowded Finn Valley Centre.

The Finn Valley AC man won bronze in the 800m in Munich on Sunday, his fourth time winning a European medal.

And at his homecoming celebration earlier, he was delighted how people got behind the sport.

English was well positioned in the 800m final coming around the final bend and he was happy the final went almost exactly to plan.

“Looking back on the race the one point I was happy that it turned out how it did was about 120 to 130 metres left in the race (Elliot) Crestan gave me just enough room to get through.

“My plan was to follow on the heels of Garcia for the last lap and I knew that he would pull away and it would be fine for the win so I knew that was a good place to be.”

It’s been eight years since he won a medal at the European outdoors but after his performance at the World Championship in Oregon, he knew he was in with a chance at getting back to his best.

“I finished the third European (at the World Championships) and that motivated me a lot because it said I’m back at that level again, and it was a good opportunity to medal again.”

Mark is competing again in Italy next Tuesday as he winds down the season with a couple more races before getting ready for a shot at the 2023 World Championships in Budapest.

Watch: Mark English – ‘brilliant to see how many tuned into our sport’ was last modified: September 1st, 2022 by Dáire Bonnar
FacebookTweetLinkedInPrint