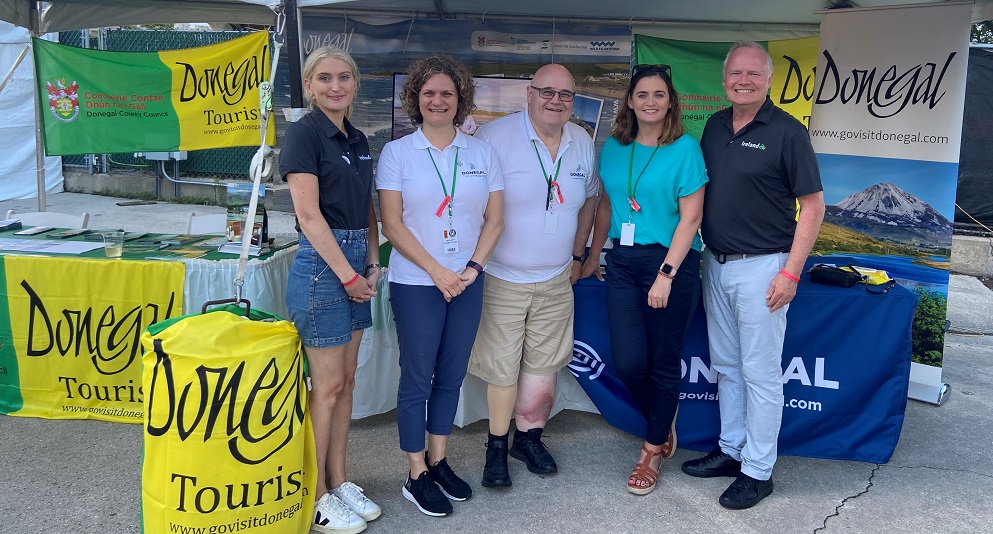 Donegal tourism representatives are promoting the wonders of the ‘Coolest Place’ at the 41st annual Milwaukee Irish Fest.

A warm invite to Donegal is being issued at the festival, which is the largest celebration of Irish culture and heritage in the United States. Juliet Dillon, Tourism Ireland; Iga Lawne and Barney McLaughlin, both Donegal Tourism; Sheila Russell from Harvey’s Point Hotel; and Paul McDonagh, Tourism Ireland have been working hard at the event on the shores of Lake Michigan in Wisconsin

The four-day festival – which has a huge audience of more than 100,000 visitors – was an ideal opportunity for Tourism Ireland to showcase Ireland as a superb holiday destination to our important Diaspora audience and people with an interest in Ireland.

Alison Metcalfe, Tourism Ireland’s Head of North America, said: “The Milwaukee Irish Fest provides a really good platform for Tourism Ireland to showcase Ireland, including our rich heritage and culture, to prospective American visitors. It’s a wonderful opportunity to invite some of the many people of Irish descent living and working in the US, as well as those with Irish connections or an affinity for Ireland, to come and visit.

“The United States remains an extremely important market for tourism to the island of Ireland. In 2019, we welcomed 1.7 million American visitors, whose visits delivered €1.6 billion for the economy.”