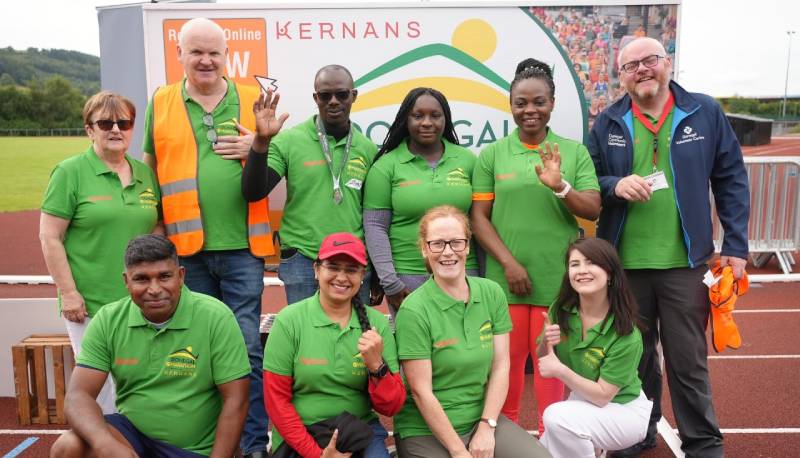 The organisers of Sunday’s Donegal Half Marathon in Letterkenny have commended the large team of volunteers who helped make the event such a success.

The weekend race which was sponsored by the Kernan Retail Group attracted an entry of almost 400. Donegal Half Marathon Ambassador, Danny McDaid, said having so many to help out on race day was key.

“There are so many groups and individuals who stepped up and played their part,” the double Olympian commented.
“We are grateful to Kernan’s who have remained with us as the main sponsor. We’re also fortunate to have the support of Donegal Sports Partnership, Donegal Volunteer Centre, Optum, Donegal County Council, Fáilte Ireland, the Gardaí, the Red Cross, Aura Leisure Centre and all the local media organisations. The Donegal Half Marathon remains very much the people’s race and that is something we take great pride in,” he added. 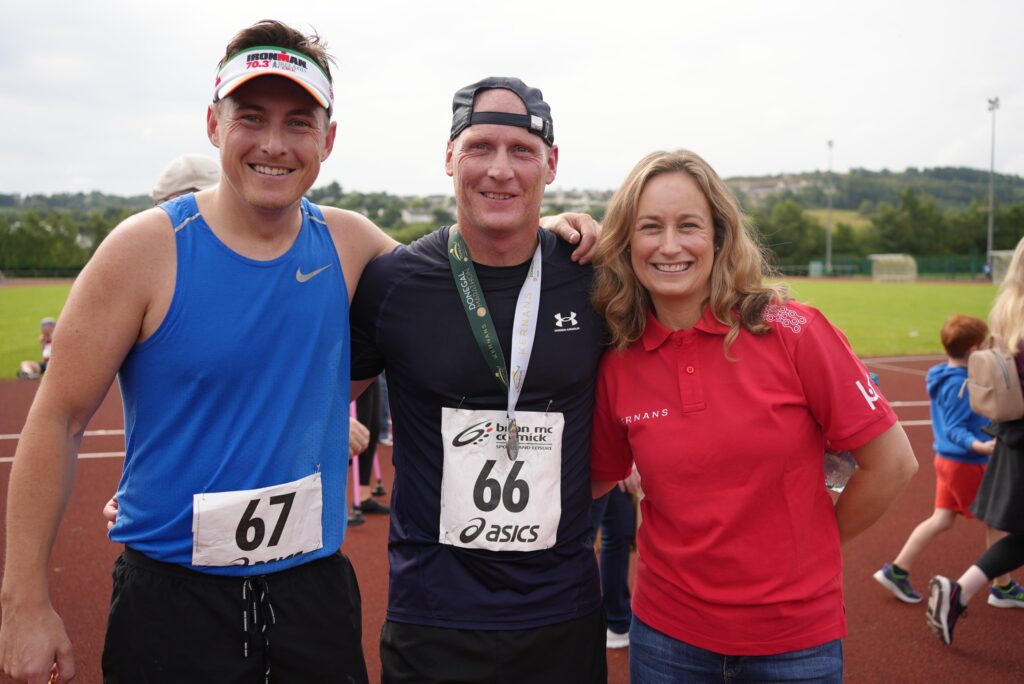 Luke Daly, Barry Daly, and Mary Daly pictured at the end of the Donegal Half Marathon on Sunday.

Race director, Brendan McDaid, was extremely happy with how things went over the weekend.

“Everyone seemed to enjoy the new course and our two cooling zones went down well because it was quite humid and muggy on Sunday morning. From the feedback we’ve been getting since the competitors appreciated the support along the route. Everything went according to plan – it was a great race with a great atmosphere. We changed the course this year and that made for a flatter and faster route. It’s a great run-in from Rashedog and the road has been recently been resurfaced,” he said.

“We had over 100 people helping out on the day between stewards and water stations. We had the Red Cross on hand for first aid and their services were needed again this year as three or four people needed a little bit of assistance. The Gardaí come along every year and control the traffic in conjunction with our head stewards, Neily McDaid and Gerard McGinley. 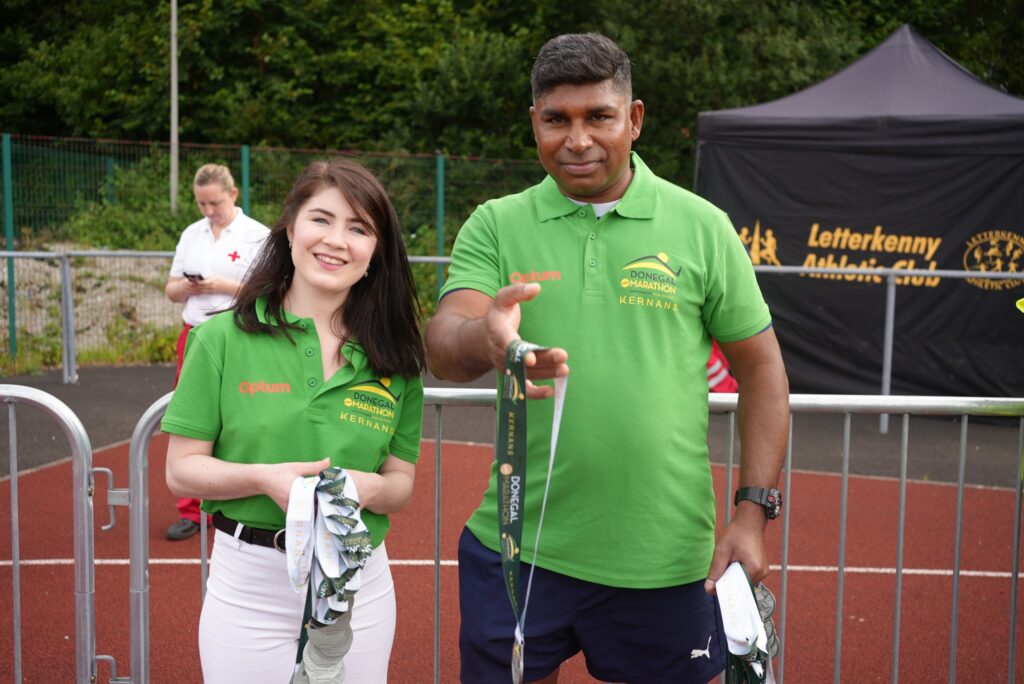 Offering a helping hand at the finish of the Donegal Half Marathon.

“We had a debrief at the start of the week and while it was good to get so much positive feedback, we are always looking for ways to make the Donegal Half Marathon better. Next year will be the tenth staging of the event and it’s our aim to make it bigger and better than ever,” the race director added.

Myles Sweeney is Coordinator with Donegal Sports Partnership and Donegal Half Marathon Committee Chairperson.
“Everything fell into place so well and in tandem with our health and safety plan, so we cannot but be happy. It’s great to be pulling on the experience of the race director, Brendan McDaid and the likes of our ambassador, Danny McDaid, who has been involved for years. The team that they assemble is full of experienced people and once that’s in place it makes things a whole lot easier. 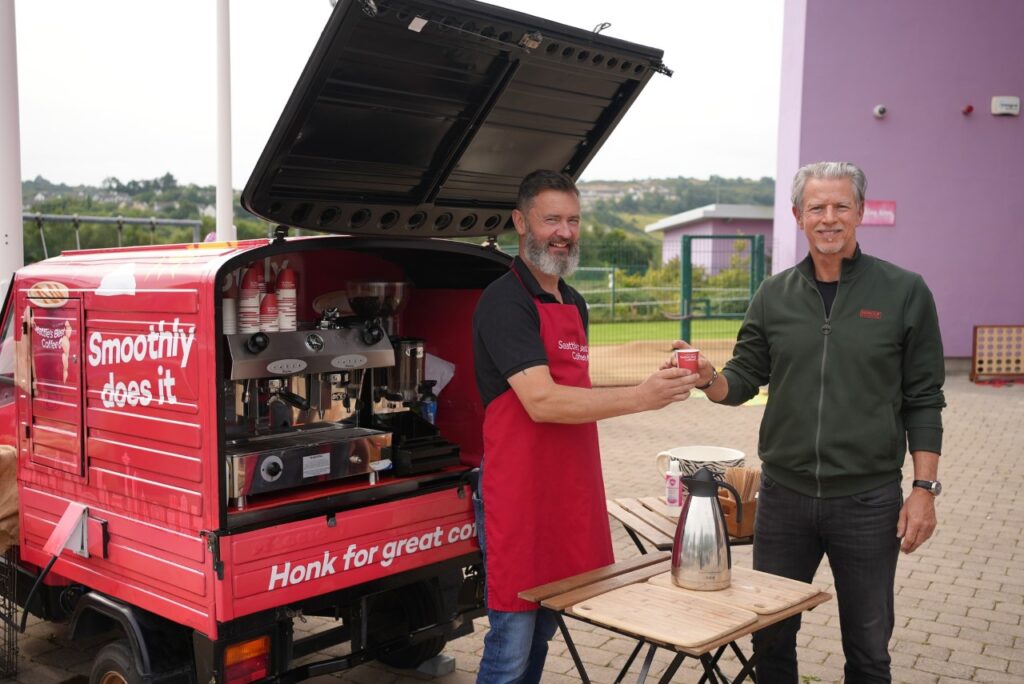 Anthony Kernan taking time out to sample some of the fine coffee on offer at the Donegal Half Marathon.

“Next year will be a special event in that it will be our tenth Donegal Half Marathon. I feel this is a race that can only get better. The committee is one that never stands still – we’re always looking to improve and attract more people. You look at diversity, you look and inclusion, you look at the disadvantaged and you try to get everyone involved. With the vibrant committee we have, I’d be positive about the future of the event.

John Curran, Donegal Volunteer Centre Manager, said he was delighted to be associated with the Donegal Half Marathon.
“It’s wonderful to see volunteers who have been with us for up to five years that are coming back year on year to help out with this event. It’s great to see that community spirit and seeing people giving of their time to help other people enjoy what is a fantastic event,” he added.

“We are always keen to have more volunteers involved in things like the Donegal Half Marathon, particularly for the social benefit there is for the volunteers who come forward. Not alone are they giving to the community, they’re giving back as well. They’re getting to meet new people, they’re getting a new experience and it’s just wonderful for people to have the opportunity to come out and see people smiling and people happy wearing their green t-shirts with pride and helping people,” he commented. 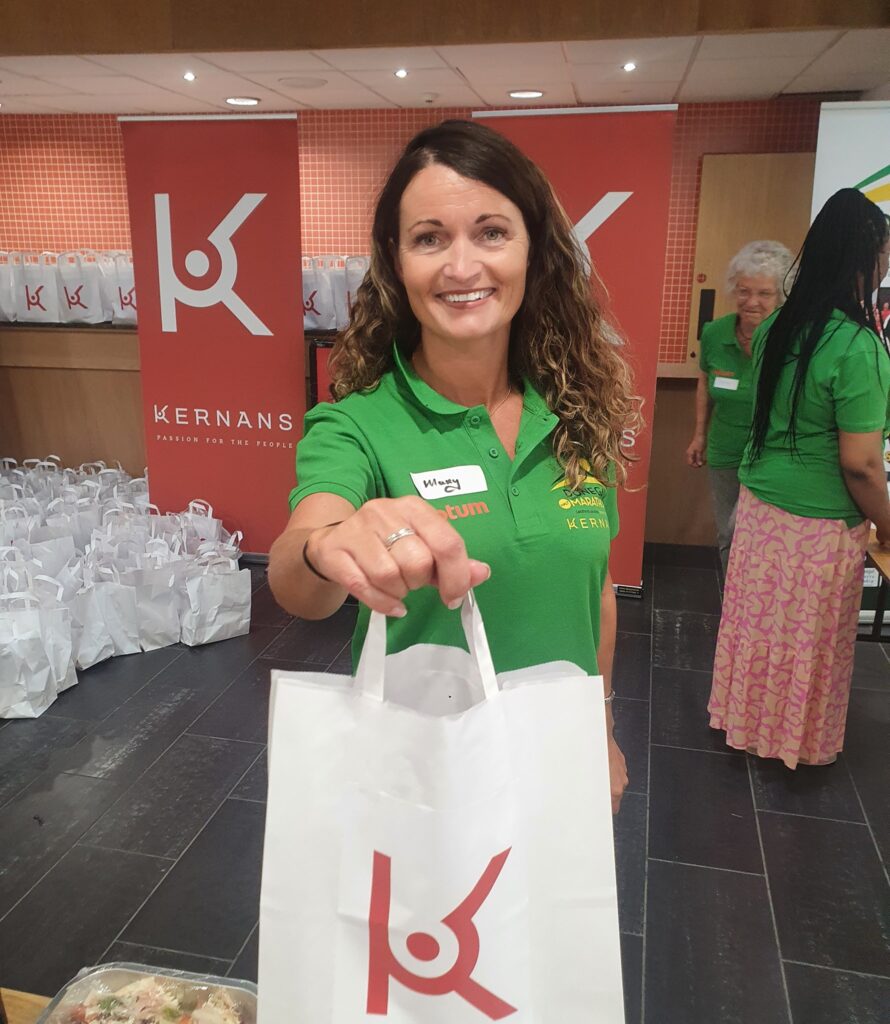 “We are always keen to recruit more volunteers and we believe there is no one who doesn’t have a skill, who doesn’t have time to give and who doesn’t have something be it big or small, that they can do to benefit the community. People will always get more back than they put in. We see people coming forward every year doing wonderful work.”