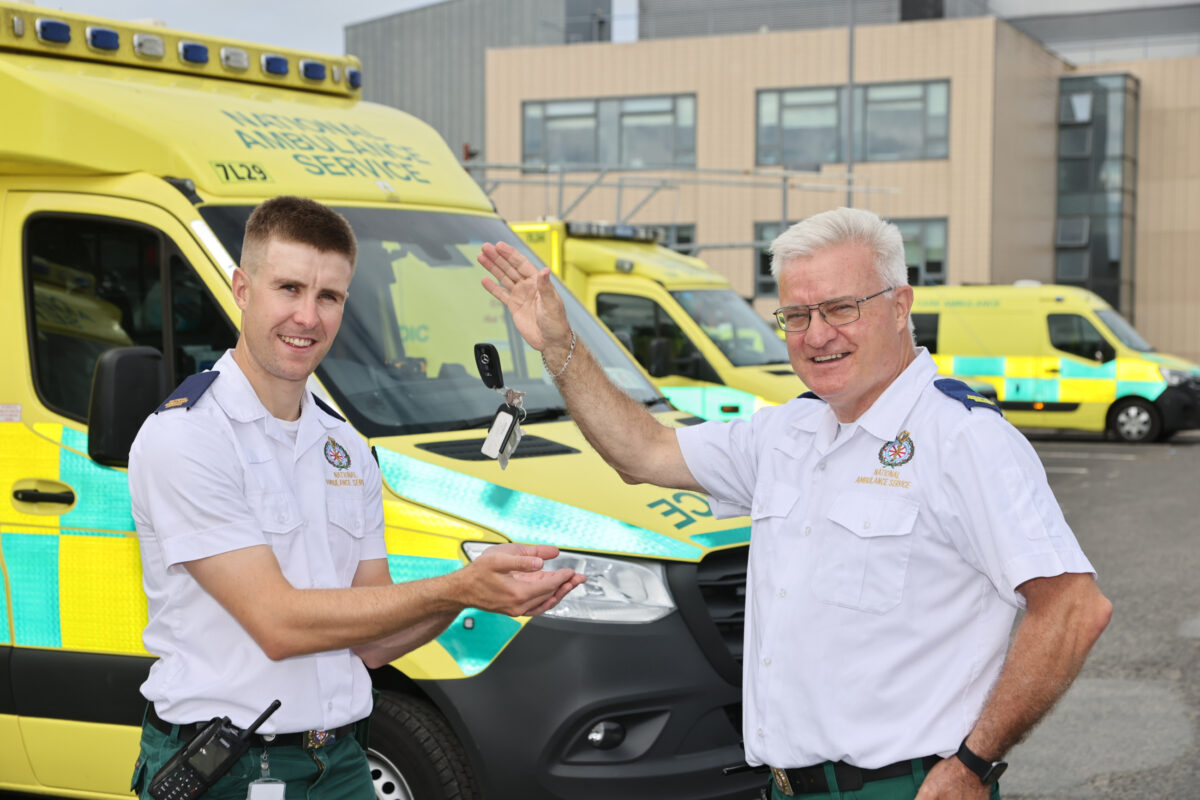 Paddy, Patrick and Paul Doherty: 80 years on the road and counting

‘You’re young Doherty – Paddy’s son, were you looking about joining the Fire Brigade? I was. What size Wellington do you take? 10, right call up to the station you’re starting on Monday night.’

That was what consisted of an interview by the great and Late Jack Lillis, Chief Fire Officer driving down the High Road. When he spotted the 19 year old Patrick Doherty walking, Jack pulled up and held the brief interview out the window of his car.

And that was that. Patrick started as a member of the emergency services following his father, also Paddy who answered the call for 40 years before him. Patrick never worked with his late father on emergency calls Paddy Senior was off sick when Patrick started on the Fire Service but both of them were on the books as Fireman with the Letterkenny Brigade.

The Doherty family made a little bit more of local history on Tuesday morning Patrick Doherty was on emergency call out for a shift of duty with his son Paul who, within the last few weeks completed an intense 2 year training course to qualify as paramedic the father and son were in the same team on ambulance fleet number 7L29.

The 201 Galway registered Mercedes is the ambulance that Patrick normally drives as his son takes the wheel for the shift on Tuesday morning. These few weeks will be the last opportunity for the father and son paramedic team to work together before Patrick retires from the emergency service. His son Paul will start where his father started before him answering emergency calls out of Letterkenny. 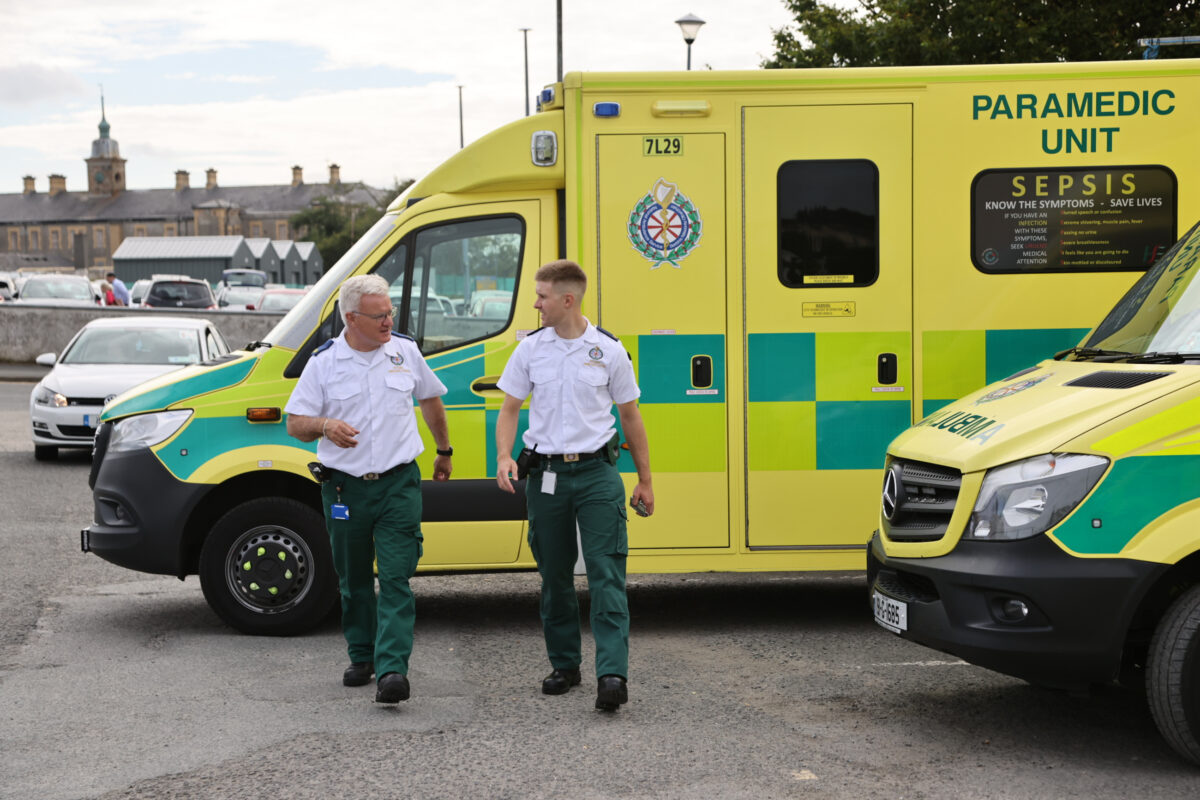 Stepping it out: Patrick Doherty and his son Paul at Letterkenny General Hospital. Photo Brian McDaid.

The late Paddy Doherty Senior started answering the emergency calls back in the 1950’s when the Fire Service in Letterkenny first got on the road with an old converted bread van!

Along with local calls in Letterkenny, the brigade were called out to calls as far away as Malin Head. An old picture of that old converted bread van shows it parked outside the Garda barracks in Malin town. Up on the open back alongside the old wooden Bailey ladder is a young Paddy Doherty in the left with fellow members of the Letterkenny Brigade including Hugh McGlynn, Davy Cowan, Willie Peoples and Bobby Curran pictured with Jim McGlynn Letterkenny station officer standing beside the Donegal Chief Fire officer of the Day Jack Lillis. 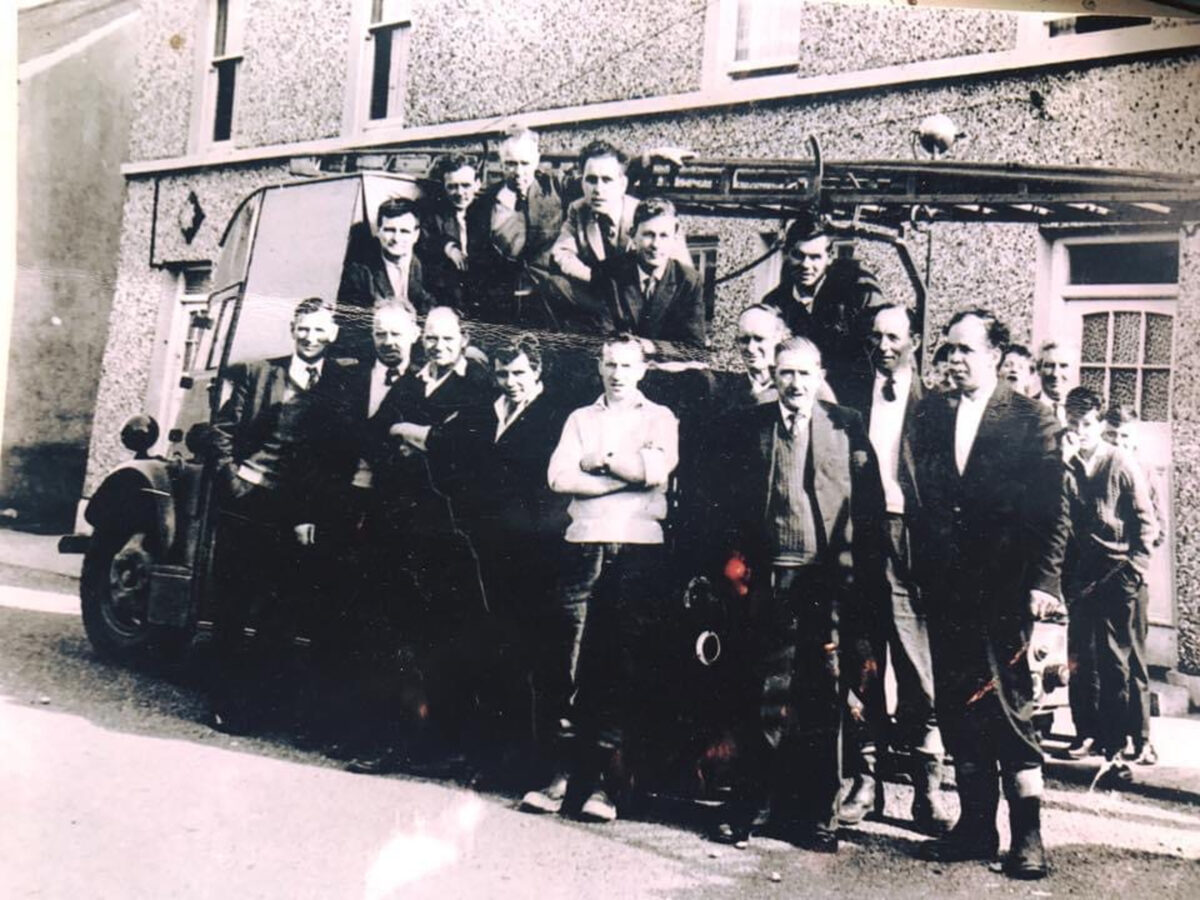 Paddy Doherty on board the the old Letterkenny Fire engine (top left) when the crew made the long call to Malin Head.

Paddy Doherty worked in what was known as the corn market Charles Kelly hardware shop on the Main Street. Willie Peoples also worked there. It was a regular sight to see the both of them running through the hardware department, two shop coats like two Batman capes flying behind them as they answered the call of the siren which filled the Cathedral town calling all the firemen into action. Paddy saw the arrival of the new fire station on the High Road going to fire calls in all kinds of Fire engines including the Green Goddess Bedford fire engines.

When Young Patrick Doherty started with the Letterkenny Fire Service he was part of a new crew of firemen including Tony Coyle, Michael Herrity and Tommy Friel. When these new firemen started in Letterkenny they were part of the first in Donegal to be trained in the use of breathing apparatus to go into smoke-filled buildings to fight fire and search for casualties. Patrick’s daytime job was in Dillon’s Supermarket that Paddy recalls as the great place to work and the owners Bernie and Jimmy were very understanding as employers to let Patrick off work in the supermarket to answer the call. Paddy, very much into his cars, was a regular sight making his way to fire calls in the early 80’s in his Hot Hatch, a racy Ford Fiesta XR2. 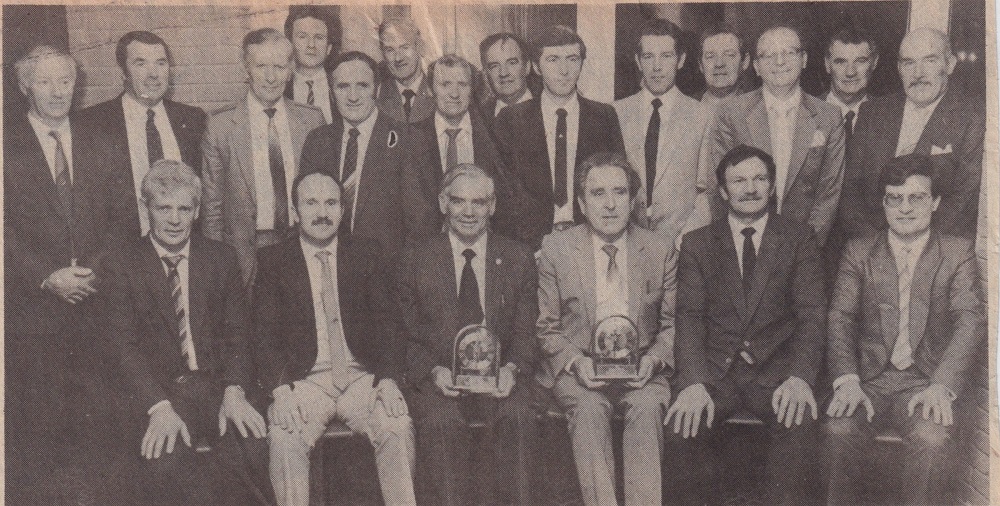 Paddy Doherty seated right with Fire Officers from all over Co Donegal at the retirement function for the late Willie Peoples and Bobby Curran. Photo Brian McDaid.

Paddy Doherty in his days as a members of the Fire Service following a big fire in Lifford. Photo Brian McDaid

Paddy Doherty’s natural ability as a leader was soon realised when the young firefighter was promoted to the rank of station officer for Letterkenny.

I had the privilege of working with Paddy as my boss when I joined the fire service in Letterkenny when I started in 1985. Paddy Doherty was the station officer. In the eighties we saw a lot tragedies at road traffic accidents (RTAs) and house fires, along with attending calls, Paddy was always there to help and share the knowledge

Patrick also shared his knowledge at the request of Hugo Boyle in Carrigart and gave up his own private time to train the original members of the Mevagh Fire Brigade when it started off and when that brigade finally got their new fire Station up and running Paddy Doherty was one of the special guests invited back to the opening in 2015. 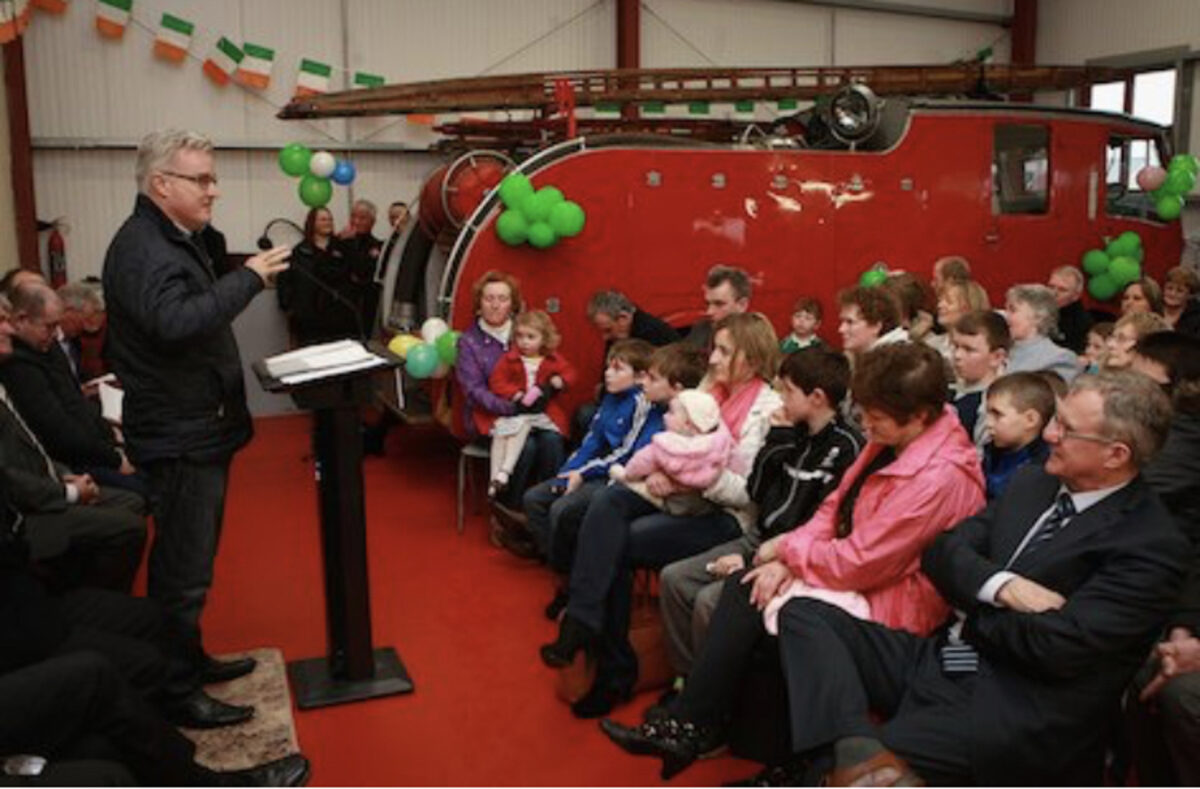 Paddy Doherty who was a special guest at the opening of Mevagh Fire Station in 2015 Photo Brian McDaid. 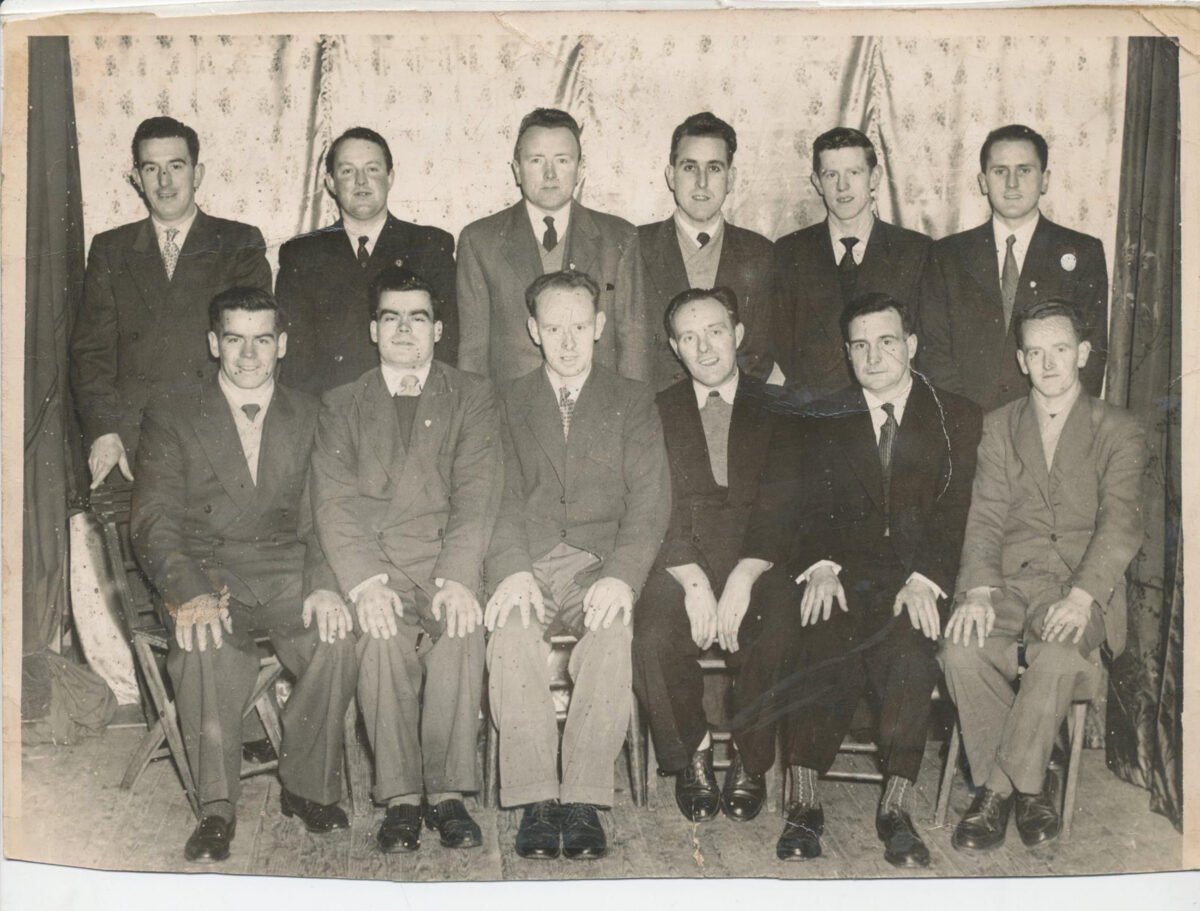 In 1988 Patrick moved to a different emergency call when he joined the ambulance service, becoming permanent in the early 90’s. Over these last 34 years Patrick Doherty has served the longest part of his career answering emergency calls. Over the years Patrick has turned up at many call outs where he was working alongside his old teammates from the Letterkenny Fire service at road traffic accidents. Paddy’s job as an Ambulance Driver has changed so much over the last 30 years. At the start it is very much a case of getting a casualty or patient to the hospital as quickly as possible within what is known as the ‘Golden Hour,’ which is the hour directly after an accident. Ambulance Drivers have now become paramedics where along with getting their patient to the hospital there is more time spent along the road side stabilising a patient’s condition before they leave the incident scene. 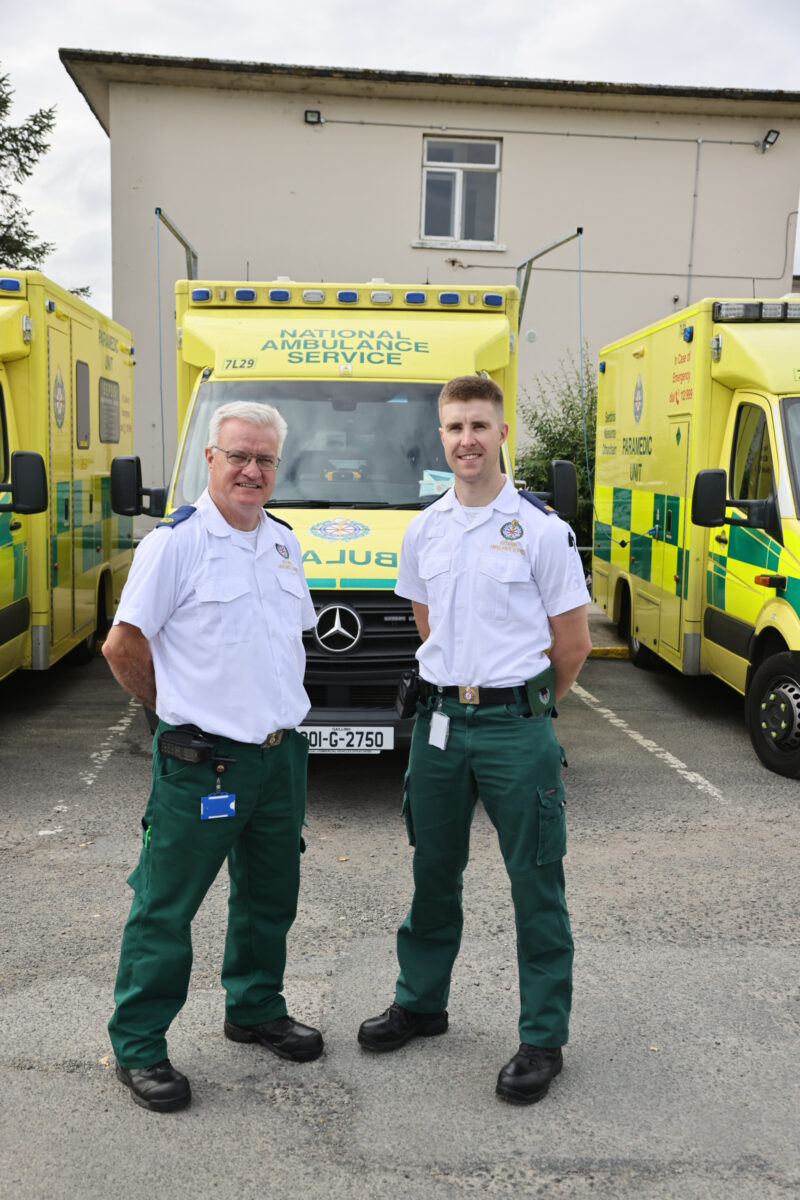 Along with this and isolation of Donegal in the North West of Ireland many patients have been passengers with Patrick on the long road journeys from Donegal to Dublin or Galway over the years. And in times of distress and uncertainty ambulance people like Paddy Doherty were there to comfort and reassure patients in very unfamiliar circumstances.

Following in the footsteps

So as young Paul Doherty prepares to take up the baton that his late grandfather Paddy started off on the High Road many years ago, where the first Fire Station was a makeshift effort in what was known as the old poor house. Then the new Fire Station was built in or near that same site. A station that both Paddy senior and junior answered the calls out of over the years when the old siren called them. Then Patrick moved further up the High Rd to start his long career answering emergency calls from Letterkenny General Hospital. 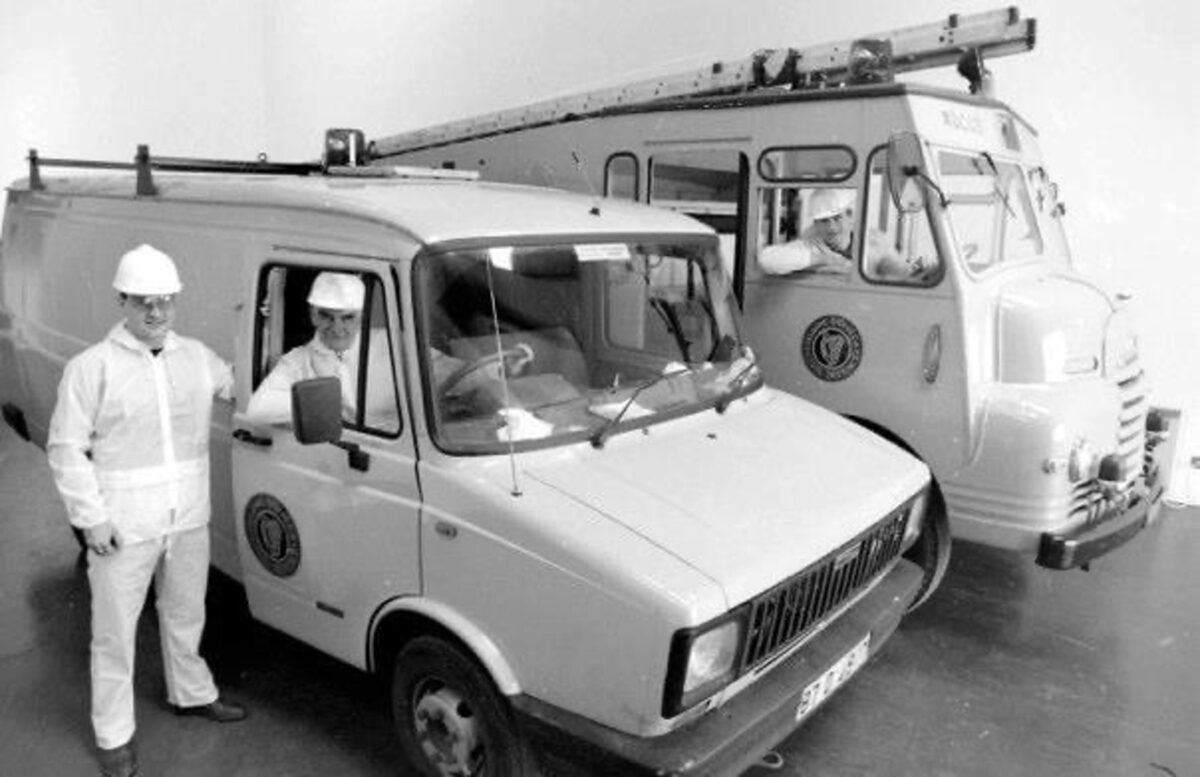 Patrick Doherty and Bobby Curran as part of the Civil Defence in Letterkenny in the late 1980’s included is the old green goddess fire engine. Photo Brian Mc Daid

Now young Paul is about to follow in Paddy’s footsteps. But as Paddy jokingly remarked this week: “I don’t know who is following who’s footsteps, because both father and son wear size 10 shoes and some mornings I find my shoes missing! Paul’s away wearing them and I end up going to work wearing Paul’s shoes.”

Here’s wishing Paul Doherty many long years of service answering the emergency as he turns out onto the High Road with his ambulance, a call like the generations of the Doherty family has made before him and here wishing Patrick a well-deserved retirement in the coming months.

Paddy, Patrick and Paul Doherty: 80 years on the road and counting was last modified: August 31st, 2022 by Brian McDaid
FacebookTweetLinkedInPrint