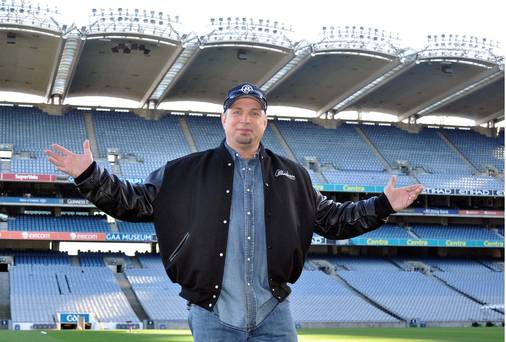 Donegal fans will get to experience a one of a kind stage at Croke Park for the visit of Garth Brooks as the country star gets excited for his return to Ireland.

The US singer begins the first of five concerts in the Dublin venue on Friday 9th September and has a treat for those in attendance with a new special stage making its way to Ireland.

Speaking on his social media channel, Inside Studio G, he said: “It will be long and going out into the crowd. It will be elevated so that the people in the back can see. So this won’t be like (any other). This is going to be elevated a lot”.

Brooks, who famously was meant to play in Ireland in 2014 before local residents near Croke Park refused the five nights,  said he isn’t ready for the trip yet but is hoping to make it a great week for all that are in attendance.

“I don’t think I’m ready yet, I think it’s starting to hone in right now. I’m just worried about making it the best for those people that show up. I’m worried about everything from the city to the travellers in because there are a lot of people coming from other countries.

“I want everybody’s trip to be the best, I want it to work for Ireland and for Dublin, I want to make sure our northern Ireland neighbours know that they are welcome.

Brooks also said about coming to Ireland that since his last visit to the country all he has wanted to do is go back, commending that it’s the people more than the scenery that got him about Ireland.

He added: “If you’re an artist, you get to play music, you do not get to fulfil your wildest dreams until you play Ireland.

“To say I’m excited for the five nights in Croke Park is an understatement.”

Garth talks about his Irish shows in the video below: