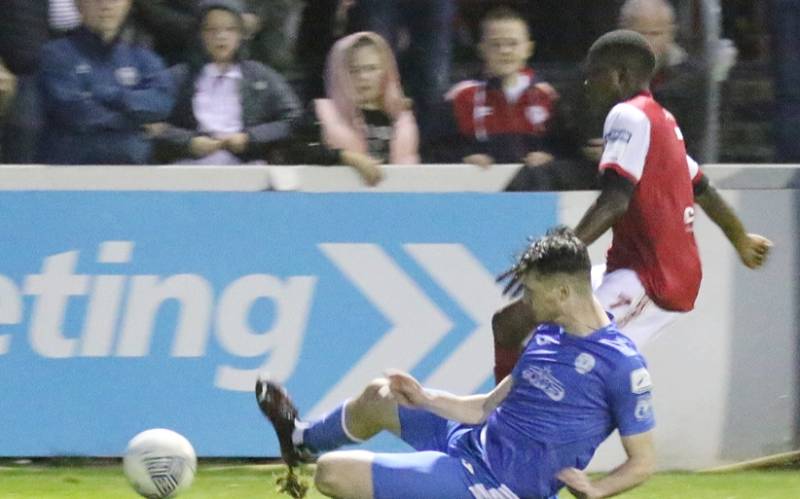 Finn Harps finished with 10 men as they were defeated 2-1 to St. Patrick’s Athletic at Richmond Park in the Premier Division.

The three goals all came in the first 25 minutes, and Harps found themselves a goal down inside the first quarter of an hour as Anto Breslin’s low cross found Chris Forrester unmarked, then three minutes later Breslin turned goalscorer from Barry Cotter’s cross.

Barry McNamee got one back for the Donegal men after Eric McWoods fizzed a ball low towards the Ramelton man who was unmarked at the back post to tuck the ball home.

But Ollie Horgan’s men didn’t create enough to find an equaliser, while Liam McGing was sent off for a high tackle with five minutes to go.

Finn Harps were hoping to add to their 3-2 win over Sligo Rovers at Finn Park two weeks ago, with goals from McNamee, Ryan Rainey and Ryan Connolly.

They made three changes from that win as McGing, Dylan Duncan and José Carrillo replaced Rob Slevin and the suspended Rainey and Connolly, who was red carded in the win, along with Ollie Horgan.

St. Pat’s meanwhile named an unchanged side from their 3-1 win over Bohemians at Dalymount Park.

The opening 10 minutes was bright with both sides getting up the pitch into good areas but neither goalkeeper was tested.

St. Pat’s didn’t take long to open the scoring however as Atakayi found Breslin down the left and his cross evaded a number of players before falling to Forrester who tapped home unmarked.

Moments later, it was 2-0 as this time down the left wing Sam Curtis found Barry Cotter with a ball over the top and Cotter crossed.

The cross was parried by James McKeown only to Breslin at the back post who smashed home for his first goal for the club on 15 minutes.

The Harps wouldn’t be 2-0 down for long however, as Carrillo’s long throw found McWoods down the right wing and the American fizzed a low cross to the back post and McNamee was in acres of space to slot the ball into the net.

Ollie Horgan’s side almost got an equaliser when Duncan’s cross found McWoods but his first touch on the edge of the six yard box went away from him and the ball was cleared.

The remainder of the half saw few chances, with a Forrester free going wide while Atakayi’s shot from the edge of the box was saved by McKeown as it stayed 2-1 at half-time.

Tim Clancy’s men had the first proper chance of the second half as Forrester had a shot blocked before he pulled the ball back to Jamie Lennon but the midfielders shot was just wide.

The Donegal side then had a few chances, with a Donelon free crossed in not receiving any touches and Rogers had to be alert to save.

Boylan then had a dangerous corner come in but again there were no takers before Boylan had a shot curl in towards the corner of the net but go wide.

McNamee and McWoods played a neat 1-2 and the latter’s cross found the former but his shot deflected into Rogers’ grateful arms.

The Saints went looking for a third and a long throw found Eoin Doyle who nutmegged McGing to find himself 1-on-1 with McKeown but the Englishman was equal to it.

Then Lennon’s shot from way out should’ve been held by McKeown but he spilled it to Mark Doyle. McKeown did however make up for it as the point blank save from the rebound was superb.

It was even more of an uphill task for Harps as McGing was given a straight red for a high tackle on Adam O’Reilly as St. Pat’s looked to counter.

Former Harps man Owolabi almost made it 3-1 as he shrugged off Carrillo and was in but again McKeown did great to save.

It would end 2-1 as the ten men couldn’t create one last chance to equalise, but they stay 9th as Derry City defeated UCD 3-0 at the Ryan McBride Brandywell Stadium.