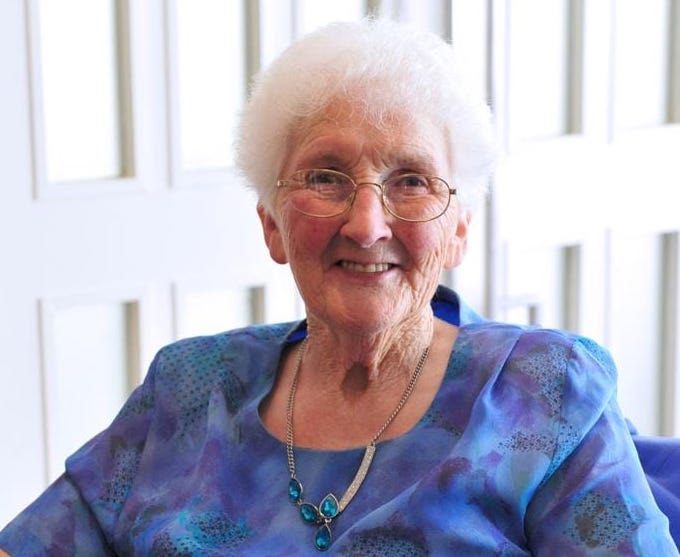 Sarah Gallagher (nee Robinson) was only in her 20s when she settled in the west Donegal outcrop of Carrickfinn.

Any further west and she would soon have been speaking with a New York accent in her later years.

The life and times of the Mayo woman were celebrated at her funeral mass at St Mary’s Star of the Sea Church in Annagry today.

Not surprisingly she fit a huge amount into the wonderful 93 years she spent on this earth, the majority of them in Donegal.

Her loving family who were the centre of her universe gathered to shed tears of heartache, pride and joy as they recalled the amazing life and times she shared with them.

Those who shared those wonderful stories of granny included her 26 grandchildren and 36 great-grandchildren.

She came to Donegal from Mayo in her 20s when a local man named John Ban Gallagher won her heart while he was fishing off the Mayo coast.

She settled among the people of Carrickfinn and didn’t return for a full five years from when she left her native Mayo.

Fr Pat Ward told the congregation that Sarah always told her family that she had found the love of a good man and had settled in a good community.

Her great-grandson, Donegal and Killybegs GAA player Eoin Ban Gallagher and some of his team-mates were among the mourners.

Fr Ward said Sarah was most happy in her home where she loved to meet and entertain family, friends and neighbours.

He said that although she loved a cup of tea she rarely made one but would encourage visitors to “stick the kettle on” as they were passing it.

Sarah Gallagher was laid to rest in the adjoining cemetery as the early September sun shone down across the Rosses.

A beautiful blow-in who rooted and settled in this West Donegal outcrop leaving a legacy of so many new lives just waiting to blossom.

Sarah Gallagher – a beautiful blow-in who made her home in Carrickfinn was last modified: September 4th, 2022 by Staff Writer
FacebookTweetLinkedInPrint