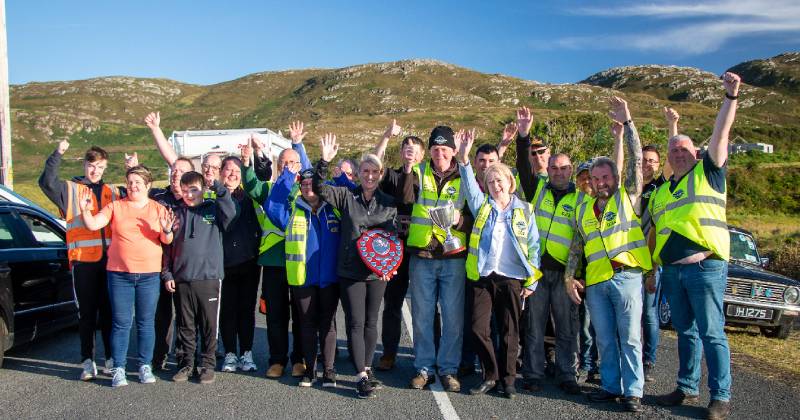 Another great weekend of action at the Knockalla Hillclimb

Yet this years’ ALEKTO MI Championship Hillclimb Round got such a huge entry that pre-event scrutiny had to start the previous Friday evening.

After two extraordinary days, John Donnelly in the Pilbeam MP 62 and Kevin Gallagher in his Darrian were crowned winners on Sunday and Saturday respectively, and awarded the John Leinster and new Danny Gormley Memorial trophies at an emotional start line ceremony on Sunday afternoon.

Saturday’s event looked more suitable for a canoe than a racing car. The national rain alert provided deluge after deluge but Clerk of the Course Michael Kelly, and a very determined team, saw to it that the memorial to the late Danny Gormley ran to schedule. Rain, what rain? There were smiles everywhere.

Flagged off by Elizabeth Devine, his partner, and attired in Danny’s trademark peaked cap, with Cranford’s PJ Wilhare alongside, the owner of “Wilhare’s Corner” on the hill, the competitors defied monsoon conditions with considerable skill to deliver a fitting two day long tribute to the 50th running of the Hillclimb. 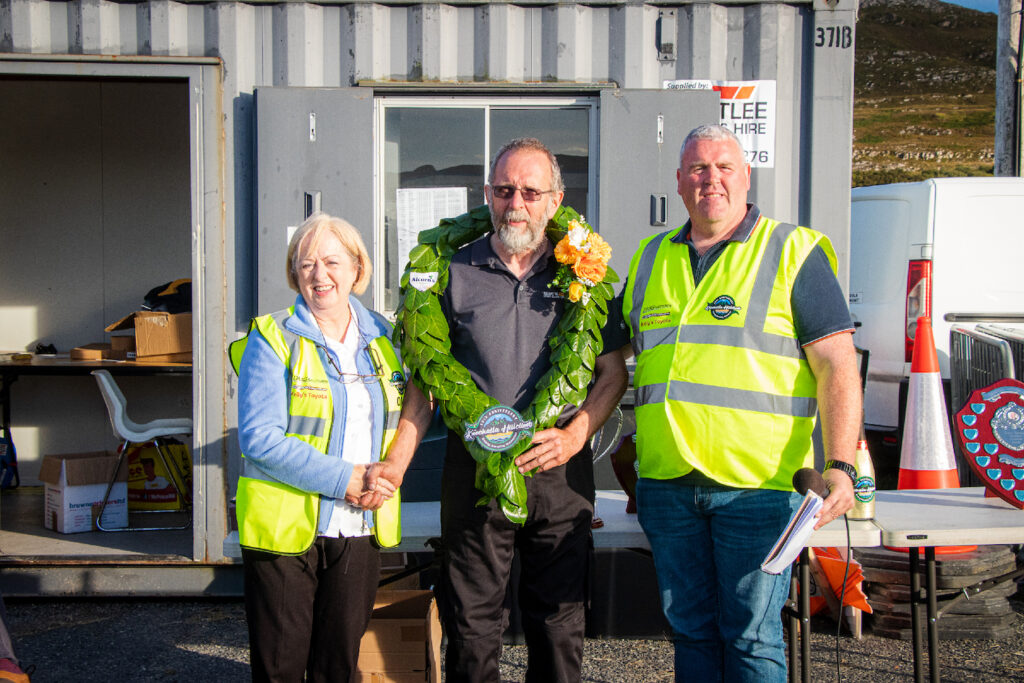 An early Saturday morning briefing was given by Clerk of the Course Michael Kelly under steady rainfall, following a minute’s silence in tribute to all who have been lost since the hill climb was last held in 2018 which was scrupulously observed. He was joined by Motorsport Ireland’s senior officials Gerry O’Brien and Robin Taylor.

It was followed by a safety briefing by chief marshal Francie Devine. After the briefings both the competitors and the small army of marshals, freshly bedecked in their shiny new safety kit thanks to St. Eunan’s GAA in Letterkenny, were left in no doubt as to the safety rules, that safety was paramount, and to be careful of the conditions.

Start line supremo Larry Harper, assisted by Safety Officer Paul Lyons were on hand to witness Kerrykeel’s Ernest Stewart leave the line as first car on Saturday at 10.30am. Just as he first went up the hill 50 years ago. His Hillman Hunter may now lack the pace of the current cars, but the driver’s performance would make you wonder if 50 years has aged the man at all.

Saturday’s monsoon conditions left some of the single seater cars unable to run but those that did were upstaged by Rathmullan’s Kevin Gallagher, in his KGP engineering Darrian T90 GTR, a specialised sports rally car powered by one of his self-built KGP Engineering racing engines. Kevin fairly tore up the hill to be crowned the day’s champion. It was an awesome run.

Billed as the ‘Race to the Clouds’, in an unusual twist the rain clouds actually descended onto Knockalla mountain for a time in the afternoon, threatening visibility, but then cleared again. In this, and in so many other ways, the race lived up to its billing.

Ripples Restaurant in Kerrykeel was packed for the Saturday evening prize giving, where the category winners got dried out, got their awards and, given the epic weather they battled, their just desserts. With members of Danny Gormley’s family present, there was a presentation by the organising committee of a specially commissioned officials vest to Elizabeth Devine, to mark both her and Danny’s long contribution to motor sport.

Sunday dawned damp, also known as “lashing” in Donegal, but was drying fast. Phonsie McElwee, a founding Secretary of the Club and an organiser of the first ever race, raised the chequered flag and away we went. While competitors went up the hill, Phonsie and PJ Wilhare entertained everyone with a library of stories about it. Competitors were expertly arranged in batches, so that racing ran almost continuously, with each getting in 4 runs on Saturday and 4 on Sunday, including a practice. This sets a new hill record for the number of competitive runs. 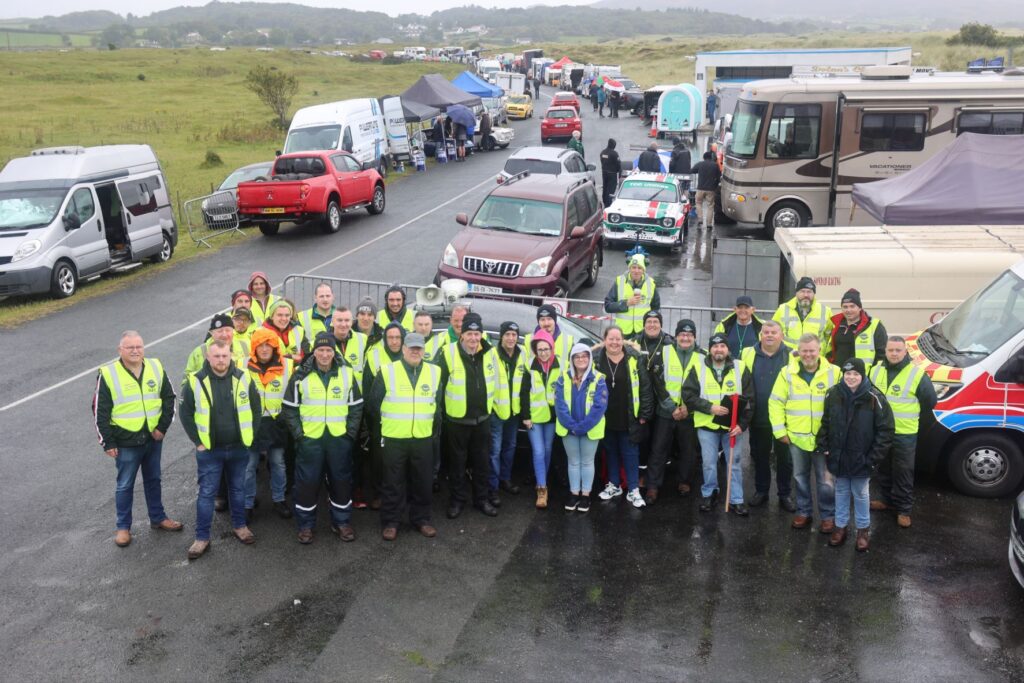 If Saturday was an exercise in tip-toeing up a treacherously wet road, Sunday would see the full force of both cars and drivers unleashed on a bone-dry hill. Then the clouds retreated back to the sky, the sun came out – heating the whole place up – and another classic day at Knockalla happened. Given what had happened the day before, it really was the stuff of dreams. Just about every single category in the competition became the scene of white hot battles.

Event Secretary Sam Pearson assisted by John Crumlish and Grainne McElhinney were kept busy all day fielding queries, giving directions and keeping contact with everyone. The McAleer family from Tyrone were in their customary start line location armed with a very high tech timing system keeping track of every single car for the two days.

The event was notable for the huge army of Club volunteers that assembled in memory of Danny Gormley, the unwavering support of the travelling hillclimb competitors in the ALEKTO championship, and that of local competitors. The weather presented the extremes of driving conditions, not to mention endurance for marshals and officials.

Many Clubmen that marshalled on Saturday took to the start line themselves on Sunday, including Craig Alcorn, Damian Cullen, Seimi Browne and Sean Brogan, showing how the hillclimb is the true clubman event.

John Donnelly in his Pilbeam MP 62 took the fastest time of 39.90secs on Sunday. The speed of the cars in this class, and the skill to drive them, is a wonder to behold.

John deservedly won the John Leinster and Danny Gormley Memorial trophies as fastest driver over the two days. Kevin Gallagher’s Darrian unable to match the single seater hillclimb racer once the conditions dried out and it was able to exploit its superior performance.

“It was an unbelievable weekend for the 50th Knockalla Danny Gormley Hillclimb. We had it all over the weekend, weather warnings, sunshine, the line-up of cars, the help, the people. It was just a brilliant weekend for everyone that attended either to help, to race or just to watch. It had something for everyone and the crowds all weekend were unbelievable.”

“I think we really marked the 50th and our former COC Danny Gormley would have been happy looking over us even if he didn’t turn off the tap on Saturday. It was a big win-win for the organising committee, officials & marshals who worked with me and the team during the event and especially in the build up.”

“It was clear from the crowds here all weekend that the event was missed and I was delighted to see so many new faces helping and competing alongside the veterans and to see the Knockalla Hillclimb coming back stronger than ever.”

“The organising committee would like to thank everyone who supported them in the lead up to and over the weekend. A special thanks has to go to the Marshals who braved the terrible wet conditions on Saturday all day without complaint and returned again on Sunday. Without them we would have had no Hillclimb, and the visiting competitors were particularly impressed.”

“To the competitors who came from all over Ireland you were a pleasure to deal with. We hope you enjoyed your weekend as much as we did and we look forward to seeing you all again next year especially the ALKETO Hillclimb championship competitors who welcomed us into their brilliant championship.”

“The 50th Knockalla Hill Climb involves so many people and I want to acknowledge the work our sponsors:DMG Motors, Donegal Town, CBM Signs.ie, Letterkenny and Kellys Toyota, Letterkenny who put in to help us get the event back on the road after the long Covid break since 2018. We also had the support of twenty programme sponsors. That all allowed us to mark the 50th Hillclimb with a special edition 50th programme and commemorative packs for the drivers, marshals and officials. It all combined to make this a special weekend for us. Danny would have been so happy to see it.”

“A special thanks goes to St Eunan’s GAA in Letterkenny for their support with the new marshals’ safety equipment. Community volunteers working together, we are grateful for their support. “

“The same is true for Donegal County Council, for An Garda Siochana, the emergency services, the medical and rescue staff that attended all weekend and in particular the local community, the residents and landowners that allow us to use this very special place. We thank them all sincerely.”

“I hope to see everyone next year at Knockalla in September.”

Another great weekend of action at the Knockalla Hillclimb was last modified: September 8th, 2022 by Staff Writer
FacebookTweetLinkedInPrint