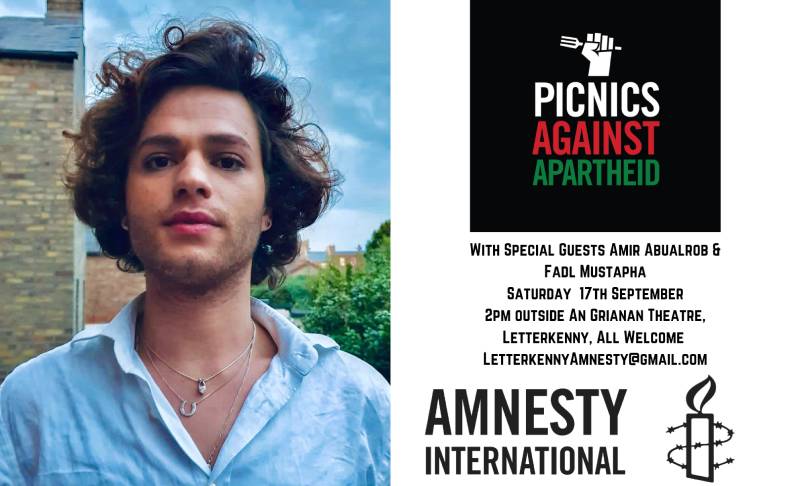 Amnesty to host picnic for Palestine in Letterkenny

Amnesty Ireland are holding Picnics Against Apartheid all over Ireland, with one planned for Leterkenny on Saturday the 17th September at 2pm outside An Grianan Theatre.

Mary Ryan of Amnesty Donegal says, “The Picnics are an act of solidarity with Palestinians who are forced out of public spaces by Israeli authorities – just because of who they are – often for something as simple as having a picnic.”

“This is just one example of how Israel enforces a system of oppression and domination against  Palestinian people wherever it has control over their rights, and it must end now.

We can do our part in Ireland by getting everyone to recognise what is happening for what it is: Apartheid- a crime against humanity.”

The Amnesty campaign ‘Picnics against Apaththeid’ seeks to bring awareness to the ongoing issue and to be,  “a visible demonstration of solidarity.”

Amnesty Donegal invite members of the public to come to An Grianan Theatre on Saturday the 17th September at 2pm. Speakers on the day will be well-known Letterkenny man Fadl Mustapha and Palestinian Theatre practitioner Amir Abualrob.  “Bring your lunch and a blanket,” says Mary Ryan, “Show your solidarity and hear what it is like to live under Apartheid from people who have experienced it first-hand.”

The event will take place from 2pm to 4pm.