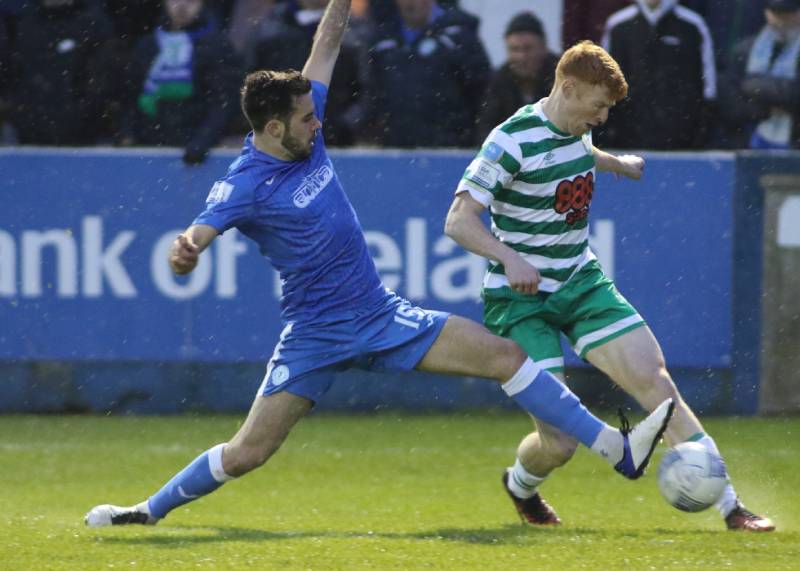 Finn Harps were outclassed by a fantastic first half from league leaders Shamrock Rovers at Tallaght Stadium this evening.

Neil Farrugia got the scoring underway, converting a rebound from and Andy Lyons shot, before Rory Gaffney made it 2-0 from the penalty spot.

Gaffney then turned provider for Lyons who fired into the top corner, and Farrugia made it 4-0 before half-time.

Finn Harps new man Jaime Siaj scored a great goal but it was only a consolation as Jack Byrne scored a rebound from and Aidomo Emakhu shot as the home side regained their four goal lead.

Ollie Horgan made three changes from the 2-1 loss to St. Patrick’s Athletic nine days ago, as Ryan Rainey and Ryan Connolly returned from suspension, while Rob Slevin was back in the team, replacing the suspended Liam McGing, José Carrillo and Regan Donelon.

Meanwhile, Stephen Bradley made five changes from the 0-0 draw in Thursday nights Conference League with Swedish side Djurgarden.

And it was four of the goalscorers, Gaffney, Byrne and Farrugia, who returned along with Dan Cleary and Sean Kavanagh.

Harps had the first half chance of the game when Mihaljević’s shot from 25 yards, but it was a tame effort when he could have came in closer.

But Shamrock Rovers’ quality was evident even from early on when Byrne fired a great ball into Aaron Greene but fizzed his shot wide.

And on the 8th minute, Rovers took the lead.

Greene and Byrne were involved, with the latters back heel finding Lyons who shot. James McKeown parried only to Farrugia who beat Boylan to the ball and fired in from close range.

Lee Grace made a great block to stop a dangerous McWods cross, with blue jerseys waiting to pounce but it was the only proper Harps chance of the half.

Rovers continued to dominate as Byrne’s corner was met by an inventive flick from Lyons, but McKeown saved.

It was 2-0 on the 36th minute when Ryan Rainey fouled Greene in the box. Gaffney stepped up and fired into the bottom left corner, with McKeown inches from getting a touch.

Five minutes later it was three as Farrugia played in Gaffney who moved into the box, laying off Lyons who fired into the top corner from the edge of the box.

And two minutes after that, Farrugia made it 4-0, getting on the end of Byrne’s tremendous defence splitting pass and firing low into the near corner.

Gaffney tried to make it five early in the second half but his audacious attempt went just over.

And Harps new man and half-time substitute had his first of three big chances within 15 minutes of coming on.

First a Boylan free-kick troubled Alan Mannus who could only parry and Siaj got in for the rebound but blasted over.

He did however get his first Finn Harps goal five minutes later, as Élie-Gaël N’Zeyi found McWoods who played in the Jordanian international, and he fired across Mannus into the far corner in what was a great goal.

It could have been 4-2 then when Mihaljević danced into the box and crossed, finding Siaj at the back post but his effort hit the top of the crossbar.

And after that chance, Rovers went straight up the pitch to score their fifth.

Again Gaffney was involved, his cross finding substitute Aidomo Emakhu but his effort was saved. The ball fell to Byrne however and in space, he was able to fire the rebound home with ease.

Harps continued to battle looking for another consolation and when Mihaljević played the ball in behind to McWoods, the American made Mannus work to save despite the shot coming from a tight angle.

The game would finish at 5-1 as Stephen Bradley’s men regain their four point lead over Derry City, while Harps stay bottom after UCD beat Dundalk 3-2 on Friday night.