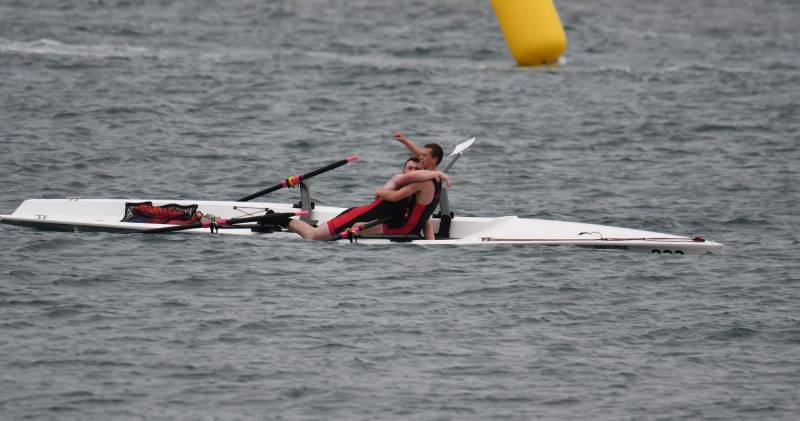 They traveled with 7 athletes and competed in 8 out of the 9 categories.

Cian Sweeney and Patrick Boomer kicked off the weekend with their heats in the Men’s single. Rowing a great race and coming third in their respective heats progressed them onto the final. Later in the day they headed back out where Patrick came 5th and Cian coming in 10th in a 14 boat final. A fantastic achievement for both boys.

Caitlin Ward was out next in the Women’s Double sculls where she was partnered by Mairéad Nic Bhloscaidh from City of Derry Rowing club. The girls rowed a fantastic race together.

To finish off day one, Loughros Point got their first medal with Patrick in the mixed double. Patrick was joined by Monika Dukarska from Killorglin Rowing Club where they picked up the gold medal with clear water between them and the next crew.

A change of weather for day two brought difficult water conditions but all athletes handled it excellently to come home with a collection of medals.

First out was the Junior Men’s Quad where Loughros Point teamed up with Kincasslagh with a young composite crew of Paul McGonagle steering Dara, Eoin, Xander and Shaun. The lads all done extremely well for their first championship event.

The boys lead from the start and went on to claim the gold medal.

Michael then headed back out 15 minutes later again in the next race where he and Cian rowed in the Men’s Doubles.

With conditions getting worse this didn’t phase them and flew past 5 boats and the boys finished in third place which is a huge accomplishment in itself.

What makes it even more impressive is that the top two crews were international entries making the boys the top Irish double at just 17 and 18 years of age.

It was then the girls turn in the Junior Women’s Quad, where Amy Shovlin, Leah Gallagher and Aoibhe Sweeney were joined by Kate Verling from Ring and Grace Hurley from Rosscarbery. These girls put in an impressive row having a very bad start pulling up on the rest of the field to take home a bronze medal.

Leah, Aoibhe and Amy then went back out again 15 minutes later joined by Mairead and Caitlin in the Women’s Quad.

After another bad start the girls made an impressive comeback passing several boats on their journey to take 5th place.

The final race of the day brought more medals in the Men’s Quad. This quad consisted of Amy, Cian, Michael, Zach (Athlone) and Rohan (Sligo).

This is a very young crew ( average age of 17) and they put in an incredible performance in a race that saw a lot of position swapping but the boys dug deep in extremely bad conditions and made up a lot of ground in the last two turns to take home bronze.

Overall the club came home with 2 gold and 3 bronze making it the most successful Offshore Championship the club has ever competed in.

The club is extremely proud of every one of these athletes and are looking forward to 5 more weeks of intense training before they head out to the World Championships in Wales.

The club however are seeking help to fund the trip to Wales for these athletes.