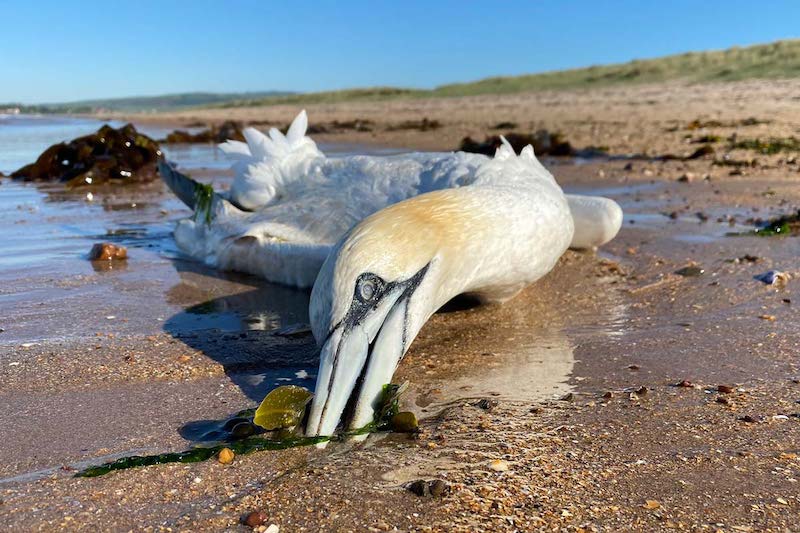 The public have been warned not to handle dead birds after a spike in in wild birds with Avian Influenza (Bird Flu).

The Department of Agriculture, Food and the Marine and the HSE Public Health’s Department issued the warning this afternoon.

This advice follows confirmation of Avian Influenza A (H5N1) in almost 60 wild sea birds at a number of locations across the country.

Avian Influenza (AI), commonly known as bird flu, is a notifiable animal disease and is a highly contagious viral disease affecting the respiratory, digestive and/or nervous system of many species of birds.

It can also pose a threat to people and other animals in certain circumstances, but these types of infections are rare.

Properly cooked poultry meat and eggs do not pose any food safety risk.

Poultry farmers and people who keep game birds or pets should be familiar with the signs of avian influenza, and should closely monitor their birds for signs of disease and report any suspicions to their local Regional Veterinary Office.

Do not touch sick or dead wild birds

Human cases of this strain of Avian Influenza are very rare. However, individuals should not touch sick or dead birds.

People can report any sightings of sick or dead wild birds to the local Regional Veterinary Office or contact the Department of Agriculture, Food and the Marine at 01 492 8026.

Keep pets away from wild birds

Dr June Fanning, Deputy Chief Veterinary Officer at the Department of Agriculture Food and the Marine, explains the risks “Avian Influenza is highly infectious to birds. Anyone travelling from an area known or suspected to be affected with avian influenza or where wild birds have been found dead should not come into contact with poultry or captive birds without prior cleaning and disinfection of clothing and footwear. It is vital that poultry owners and keepers of captive birds maintain the highest standards of biosecurity to protect their birds. Strict biosecurity remains the number one preventative measure to introduction of avian influenza into poultry and captive bird flocks. Further information is available on the Department website at www.gov.ie/birdflu.”

“In the last few weeks there have been a series of confirmed cases of Bird Flu (Avian Influenza A (H5N1) ) in wild sea birds at a number of locations along the coast, with recent reports in Louth. We are continuing to work with the Department of Agriculture, Food and the Marine to monitor the cases.

“It is really important that we do all we can to protect people following the detection of Avian Influenza in the region. We know that people are understandably concerned for the welfare of wild birds, however it is important that you do not touch potentially infected sick or dead wild birds, and if you find a dead wild bird, follow the guidance. To date, no human cases of infection have been reported in Ireland or the EU. Even though the risk to human health is very low, human cases are reported periodically from China, and the UK has recently identified a single human case of avian influenza. Where human disease has occurred, it has tended to be mild. However, elderly people and vulnerable patients living with immunosuppression could be at greater risk of developing more severe disease.”

There have been almost 60 wild birds with Avian Influenza A (H5N1) detected nationally along the coast. It is possible during this time that further migratory of wild birds will be found to have died of Avian Influenza. The risk to public health is however considered to be very low.

What should I do if I find a dead wild bird?

While there have been large numbers of wild seabirds detected with Avian Influenza A (H5N1) around the coast, it is important to remember that the vast majority of wild bird deaths in Ireland will not be related to Avian Influenza, based on information from surveillance activities. However, you should follow routine precautions to prevent any other risks to your health, by following the advice below about contact with avian species, bird feathers, and bird waste: