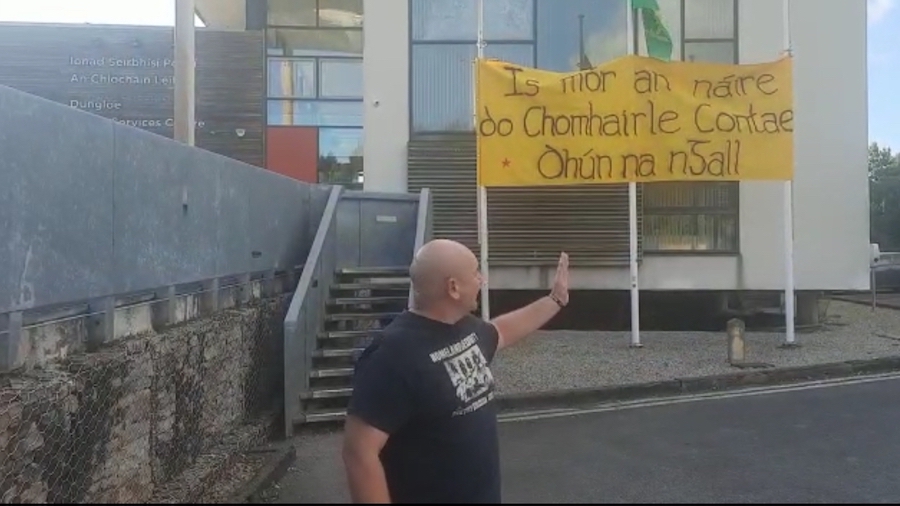 A donegal county councillor has called on the CEO of Donegal County Council to reverse his decision to fly flags at half-mast on local municipal buildings tomorrow to coincide with Queen Elizabeth’s funeral.

The Taoiseach’s office issued the directive on Friday to all local councils.

However, Councillor Micheal Mac Giolla Easbuig has called the directive an insult and has pleaded with the council chief executive to change his mind on the matter.

Councillor Mac Giolla Easbuig said that as a border county, people in Donegal have suffered more during the Troubles than many other counties not located in close proximity to the border.

He said many people who have lost loved ones at the hands of an army operated by the late Queen of England will now be forced to watch our national flag fly at half-mast in respect of her tomorrow.

A number of placards and banners have appeared at council offices over the weekend calling on the council to reverse its decision.

He said “I think it is an utter insult to so many people including council staff who have contacted me over the matter.

“They are extremely unhappy and many staff are not willing to take part in this. Many staff in Lifford whose families have lost loved ones as a result of the Troubles will have to watch our national flag fly at half mast tomorrow. That is simply too much.”

The Independent councillor said he has spoken with Mr McLaughlin who he said indicated will not change his mind on the issue unless the directive by the Taoiseach’s office is reversed or if councillors vote against it.

However, Councillor Mac Giolla Easbuig said that Mr McLaughlin needs to take into consideration the proximity Donegal people have to the North and to the Troubles.

“The reality is that we have a picture of the late Eddie Fullerton hanging in the council chamber in Lifford, a man murdered by those in collusion with the British Army.

“And yet we are about to lower our national flag to half-mast to honour the woman in charge of that army.

“Mr McLaughlin has the power to make a decision on this. This is not an order from Government, he does not have to do it,” added the councillor.

He added that an emergency meeting on the matter should have been called over the weekend to discuss the issue and to allow councillors to voice their opinion.

“I’m not the only one deeply unhappy about this but I can speak out freely because I am an Independent while others are bound by their party stance.

“We should have been allowed to discuss this instead of just having it rammed through like this and having no say on the decision of the Dublin Government,” he added.

Donegal County County has been contacted for a reaction to Councillor Mac Giolla Easbuig’s call.