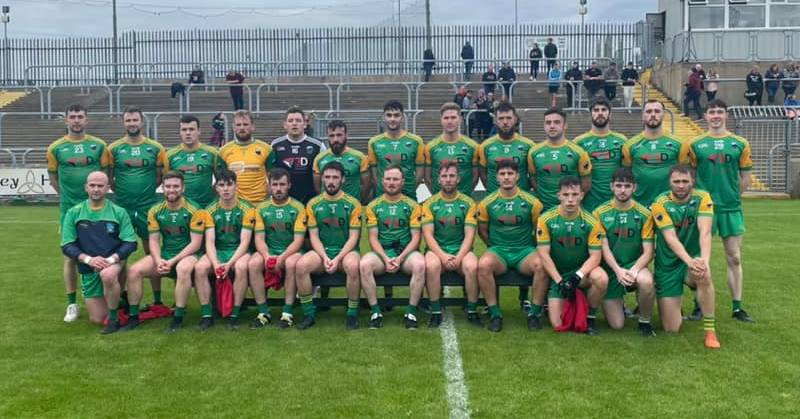 At 1-5 to 0-6 at half-time, an unexpected flurry of goals in the second half saw four goals in five minutes and brought the game to life.

Kevin McNern’s two goals gave the Glen men a 10 point lead but Michael Sweeney set one up after a long ball and tipped another in to bring it back to four.

Gaeil Fhánada looked for a late goal but Ryan Gillespie netted at the other end to ensure Naomh Columba returned to an Intermediate final after an 11 year absence.

The tactic from the Fanad men was clear, with long balls going into Michael Sweeney who was playing as full forward and he almost got a goal from the first attempt.

Oisin Shiels replied for Gaeil Fhánada and Eoghan Carr got them ahead within a minute from the left after a long ball into Sweeney.

Liam McGrenaghan got a classy point and after Sweeney took an advanced mark, he played in Mark McAteer for a goal chance but McAteer fisted over for a point to make it 0-4 to 0-1.

Kevin McNern took a good score that was well needed, and after a good move from Naomh Columba, Pauric Hegarty finished to bring it back to a point.

Sweeney converted an advanced mark but Ryan Gillespie’s free followed by a brilliant Aaron Doherty score had the sides level not long before half-time at 0-5 apiece.

In added time, Gaeil Fhánada could’ve been a goal ahead but instead were a goal behind.

After a counter which saw Sweeney play in Patrick Carr 1-on-1, the bounce got the better of him and Christopher Byrne got back to clear the danger.

Liam McGrenaghan converted another classy score with the outside of the foot to make it 1-5 to 0-6 in Naomh Columba’s favour at half-time.

The second half started poorly for Gaeil Fhánada, who had four wides in the opening five minutes, while the Glen men pointed through Gillespie, Kevin McNern, and two from Eric Carr to make it 1-9 to 0-6.

Eoghan Carr got two great scores to make it a four point game but that would soon be ten as twice Kevin McNern was played in and both times he found the back of the net, 3-9 to 0-8.

But the Gaeil Fhánada tactic worked well as Seami Friel played long balls in to Sweeney, with the first one being punched down to Mark McAteer to find the goal, while Sweeney got a hand on the next to lob Padraig Byrne and leave four points in it again.

But Aaron Doherty got two more points while Mark McAteer got one, leaving it at 3-11 to 2-9.

Gaeil Fhánada went for a goal but Naomh Columba defended well and Ryan Gillespie got the fourth goal in added time as they are rewarded with an Intermediate final against Dungloe.