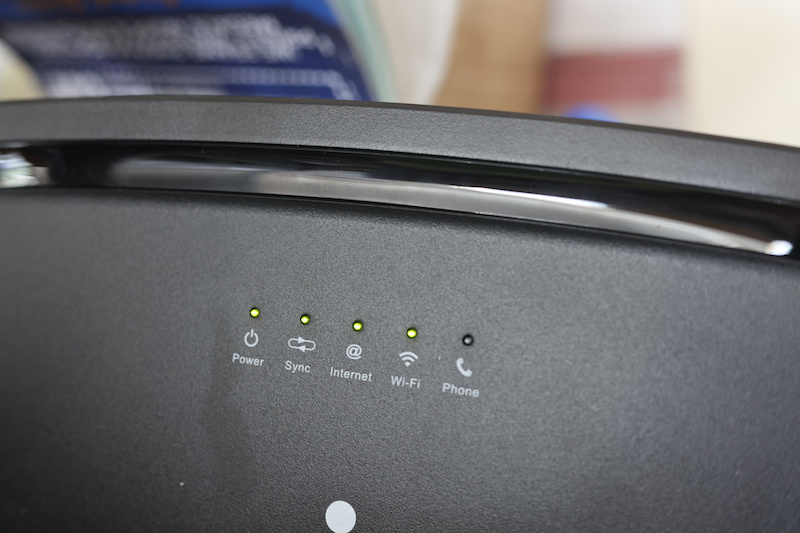 “They said to leave a message. Well sure, leave a message’ Am.. Hello Brian , it’s Bida here…… we’re just letting you know that our visitors are back!”

It was a message that I had on my mobile phone for a good while sent to me from my Auntie Bida (Auntie B) sharing the conversation with her husband Miah. Bida wasn’t into leaving messages to an automated voice that she didn’t know, didn’t want anyone and everyone knowing her business.

This coded message from Bida was sent through the old phone line that made its way from her home up to a wooden pole in her back garden and traveled to another pole in her neighbour Peggy’s garden then onto a box or cabinet at what once was called Roulston’s corner, now along the wall at Dunnes Stores Carpark.

In the last few weeks I have talked to helpSupport lines (possibly on the other side of the world ) through these same old phonelines trying to find out what was wrong with this old phone line that is not able to take the technology that travels through them any more.

For most of the time these support teams were helpful, that’s if you were in the frame of mind to talk to them after someone keeps telling you that your call is very important to them as they keep you listening to piped music in a queue. 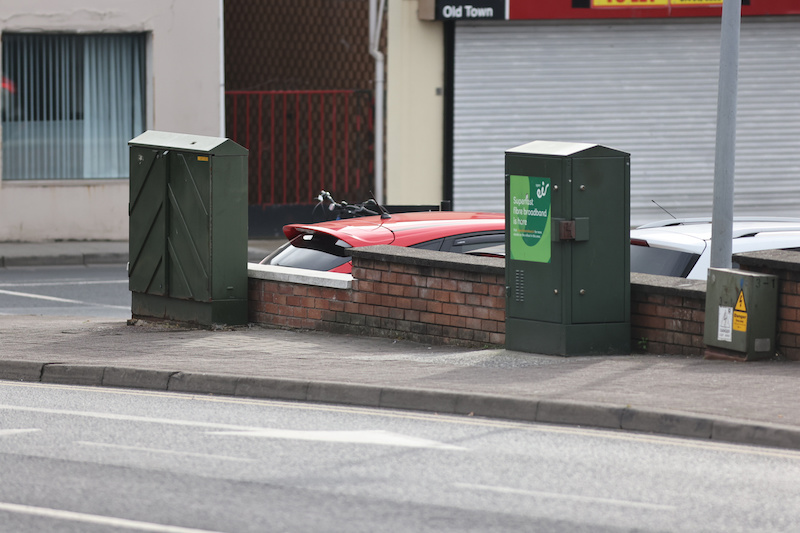 Switch it off and on

Over this last year or so I have when through the routine of calling the help line waiting in the queue and the music then waiting while the checked the line, then going through the routine of switching the modem off and on and waiting and reporting back to the person at the other end of the line who many lights would eventually go to hopefully green light which would mean that the broadband was restored.

Some mornings I just went through the routine without ringing the helpline service sometimes with success but sometimes worse than I started off! One desperate call to the help centre went through the waiting , the music, and then the steps of switching on and off and resetting the modem with an opened out paper clip! , only to find that the phone line had become disconnected from the plug in the wall, ( I never mentioned that last bit to the person on the other end of the phone line talking me through the procedure.)

On September the 8th at 8.30am a technician called and arrived to run a brand new fibre line into the old home on the Back Road. I watched him working in the old pole in the back garden as he hauled the new line across from Peggy’s back garden and started making it way through the out walls and into the old sitting room.

Originally the phone was in the back room and before that had a phone line of their own you could answer the phone from the shop which had an extension lead running up to the house. Over the years this phone in that house was the hub for the family wherever they were, along with that phone was used for calls to Ards to organise Third Order meetings, Pilgrimages to Knock were also brought together by Bida getting Lough Swilly Buses booked for the early morning trip to Co Mayo. 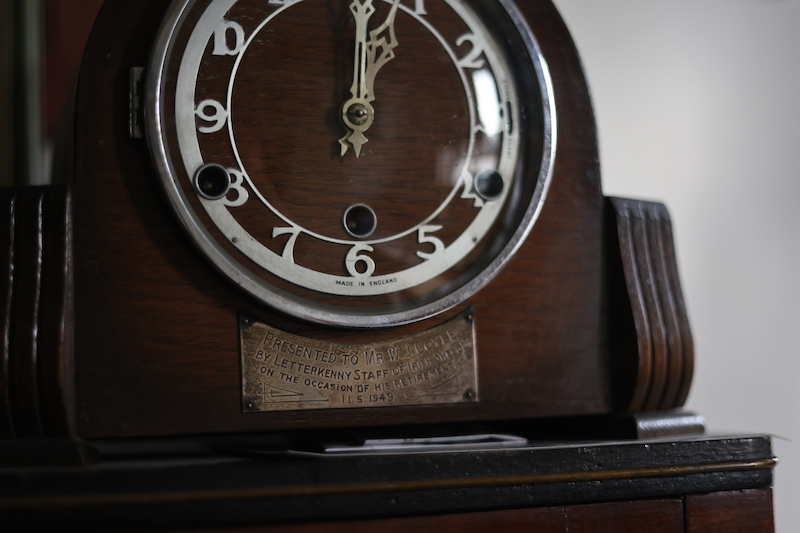 My Grandfather’s old clock presented to him on his retirement form the Irish Shell in 1949. With its westminster chime Photo Brian McDaid.

At the same time the phone wasn’t for having a long conversation because of the cost, I still have a few letters that Bida and Fr. Mark penned between Ards Friary Cresslough and the foot of the town in Letterkenny in those days . As I looked up At the old pole in the back garden I thought crossed my mind there’s a good chance that the sad news of my mothers death on the 2nd of January in 1970 was carried to her brothers and sisters near and far, probably by her younger brother, Fr. Mark.

Then the thought crossed my mind that I have nearly 20 years of answering and making calls through this old phone line from the time that we moved our business over from the Port Rd, and changed the number to that of the Cristeph Studio.

In recent years during the lockdown, I diverted the answering of the phone onto to my mobile so the phone never rings at all in the old homestead and as the technician put the final touches to the installation I noticed that the old line was still in place, asking him would he not be taking it down, he explained they both lines would be used for a period of time in the future and your broadband will stop working going to your old modem and anything using that will have to be changed to the new Modem, in passing the technician said you will need to get your address sorted because it was coming up in his books as a place called Ard Na Greine, I explained that was the name of this house when my aunts, uncles and grandparents lived when it was their home. So as I waited for the old line to go down and the new line to come on stream, the house in my mind went back to Ard Na Graine, Sounds of WestMinster Chimes of the old clock that my grandfather got when he retired from the Irish Shell in 1949 that chimes every quarter of and hour, The smell of Bida’s meatloaf or Miah Soup made with huge helpings of love. The rattle of Bida shoes specially made for her falling arches, Mass cards written with dignity for those that had passed, Sprain strings made from flax cord in small brown paper bags. Coded knocks from neighbours on the sitting room window. And the very reluctant coded message left on answering machines. Like the one we started this journey about this week. 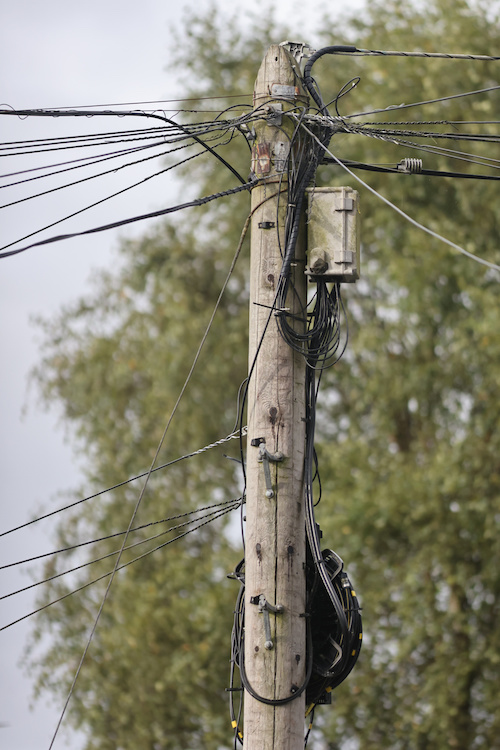 Old way with new technology a poles carrying phone lines to all the old houses in the area at the foot of the town. Photo Brian McDaid.

“Just to let you know that the visitors are back’ was sent at this time of year or a little later into the autumn, a time when the evenings were closing in and the days were getting a bit colder. The visitors in the message were in fact mice who annually managed to make their way in doors, drawing by the heat and the smell of great cooking, They were not unlike ourselves when we were wanes on cold winter days heading down to Bida from School.

Checking that the line was working I asked a few friends to ring me back and then I thought that I make a call out to check that as well, The thought cross my mind to ring the old original number of this house (which I had off by heart something we don’t seem to be able to do anymore.) I was prepared to let on that I dialled the wrong number by mistake if, in the event it was reused and answered by a stranger.

Pressing the very last figure of the number there was a short silence followed by the message, We’re Sorry… We are unable to connect you to this number.. Please recheck and dial again… The old number was never used in nearly twenty years but when I redialled it for a second time my first call to it must have activated something in the system that cancelled the automated message completely. Now I was getting the wrong number tone. Sure didn’t I know well that the number that I had dialled was incorrect, it was from a different time but from the same place, with the same memories from a time gone by. 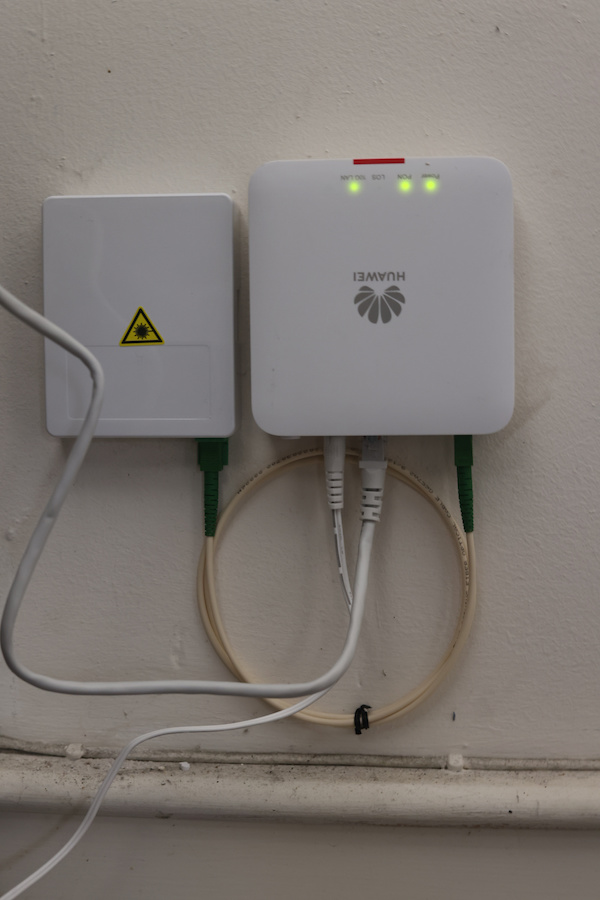 Broadband connection with fibre at the foot of the town. Photo Brian McDaid.