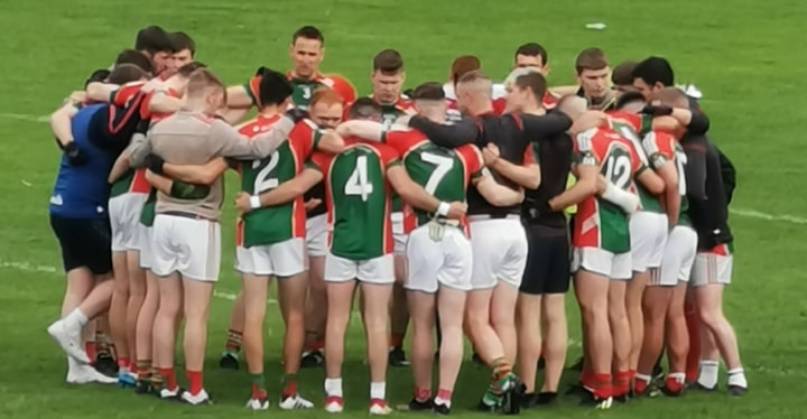 Carndonagh proved too strong for Naomh Ultan in this Junior A championship semi-final in O Donnell Park.

Ryan Kelly’s 23rd minute goal put four between the teams and Carndonagh never looked back after that , keeping Naomh Ultan at arm’s length for the remainder of the game to book a final spot against Letterkenny Gaels.

Two players not included in the programme’s starting line-ups did the early scoring. Dermot Gallier opened Naomh Ultan’s account in the first minute but Conor O Donnell replied quickly from a free and then from play to put Carndonagh ahead.

Cian Kennedy levelled it up from a close range free at 0-02 apiece but a fine effort from a 35mts free out on the left by Fergal Doherty put Carndonagh ahead again.

Cian Doherty made it a two point lead , clipping over a fine point after an excellent run and pass by wing back James Monagle.

Paddy White kicked a super long range point to leave just one in it again but almost immediately Carndonagh struck a big blow when Ryan Kelly drilled the ball to the net after excellent build-up work by Conor O Donnell and James Monagle , 1-04 to 0-03 to Carndonagh.

Cian Kennedy and Eoghan Kelly exchanged excellent points from play but Carndonagh finished the half with two important scores , a fine mark from Cathal Doherty and a super Anthony Doherty effort from distance to leave the half-time score 1-7 to 0-4 in favour of Carndonagh.

Scores were hard to come by in the early stages of the the second-half , it was nine minutes before Conor 0 Donnell  kicked the opening point. Donal Doherty added another for Carn before Daniel Gallagher and Cian Kennedy replied for Naomh Ultan , 1-9 to 0-6.

This was followed by exciting high scoring in the last ten minutes.

Ryan Kelly pointed and then we had three goals in three minutes.  Kelly finished a fine move involving Will Quinn for his second , then Fergal Doherty set up Conor O Donnell who slotted the ball low to the net, 3-10 to 0-6 , but Cian Kennedy  replied immediately with a Naomh Ultan goal , Joe Alvey pointed for them , Will Quinn converted for Carndonagh and in the last minute of injury time , Paddy White goaled for Naomh Ultan to leave the final score 3-10 to 2-7  in favour of Carndonagh.