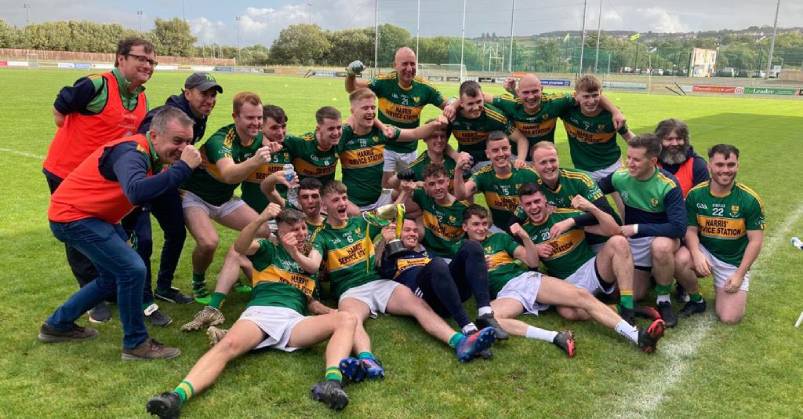 Convoy completed a brilliant comeback in the second half to win the Intermediate Reserve Championship at O’Donnell Park.

The two sides drew in an earlier round of the Championship, and many would have been expecting a similar scoreline in this game, but after the first half you would have been forgiven for writing Convoy off.

Naomh Columba raced into an eight point lead after 20 minutes, 2-5 to 0-3, but incredibly they didn’t score for the rest of the game as Convoy dominated in the second half.

Two second half goals from Paul O’Leary and one in added time from Matthew Coyle confirmed the win for Conor McDermott’s side.

Jamie McNern got Naomh Columba off the mark and a Liam Boyle free and Darragh Cunningham point had the Glen men three ahead after 10 minutes.

Jason McDaid then converted two great kicks in a minute to bring it back to a point.

But Glen scored when Matthew Callaghan played in Sean Hardy to fire into the bottom corner,

O’Leary got his first score but Glen would soon be well ahead, as Ronan Gillespie pointed then found the back of the net after Callaghan played him in quickly and caught Convoy sleeping.

Callaghan then raced down the right hand side and fired over the bar with a goal chance on, but he took his point as Naomh Columba were 2-5 to 0-3 ahead after 20 minutes.

Convoy pointed just before half-time through Coyle to go into half-time seven behind and a mountain to climb.

But they rallied in the second half and Ciaran Dolan’s free got them underway, and minutes later they had their first goal.

Dolan’s free dropped short and it was punched towards O’Leary who caught the ball and blasted it into the net.

Five minutes later, they were level as Michael Ayton did brilliant to win the ball from keeper Shane Ellis and he fired the ball into the square, with O’Leary again at the back post punching towards goal with the umpire waving the green flag after the ball looked to go in off the post before Glen cleared.

Convoy continued in the ascendency as Ciaran Dolan scored a fantastic point from play while Ayton’s attempt dropped short but Ellis could only punch over, 2-7 to 2-5 with 15 minutes to go.

Both sides had their chances to add a goal, with Convoy going four on two and Dolan passed to McDaid but Ellis made a brilliant save to deny the dangerous forward.

And when Glen needed a goal, they thought they had one when Ronan Gillespie’s shot took a slight deflection, leaving Convoy keeper Emmet Doherty stranded, but the ball cannoned off the crossbar and was cleared.

As Glen continued to search for their goal, the ball was overturned and a long ball found Jason McDaid who played it to Oran Patterson. He in turn found Matthew Coyle 1-on-1 and he calmly finished into the bottom corner to seal the victory and a hugely impressive Convoy comeback.