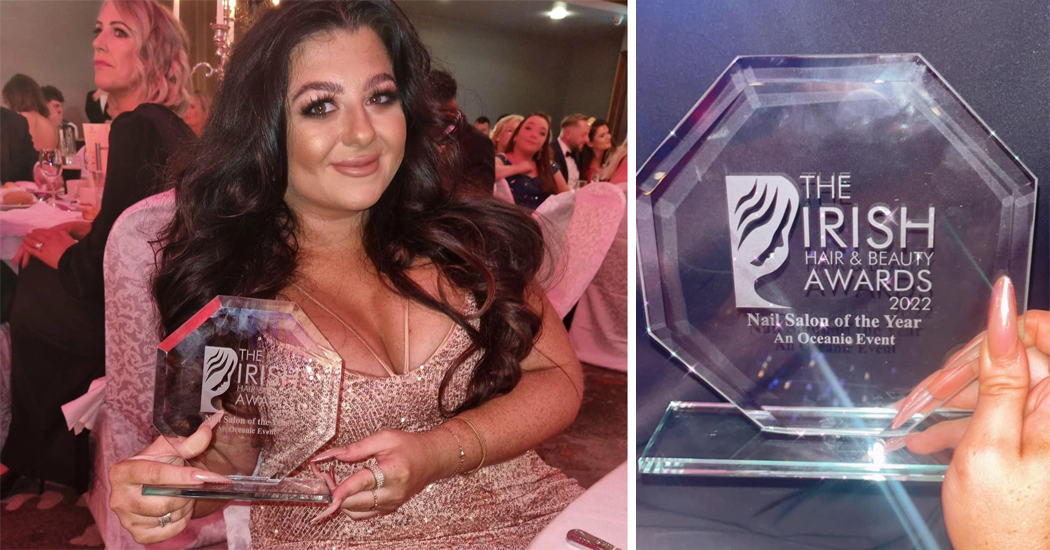 The Manorcunningham woman celebrated her success at the Irish Hair and Beauty Awards in Galway on Sunday last.

This is Vanessa’s second major award this year, having won Nail Technician of the Year Ulster at The Irish Nails Brows Lashes Awards in August.

She was also nominated for the Nail Technician prize on Sunday.

“I was absolutely speechless,” said Vanessa. “I didn’t think I’d ever win Nail Salon of the Year in such a tough category along with very successful big salons across the country.”

Vanessa, who is the daughter of Cathaoirleach of Inishowen Cllr Paul Canning, set up her business in 2016, but she never expected to gain so much recognition. She has closed her books due to the loyalty and support from her client base.

She said: “Six years ago I set up my own wee salon off the side of my house. I renovated my daddy’s old office after I noticed how much rent was in the town. I wasn’t sure if I’d even have any clients to keep me going. I just had the very basics in the salon at the start.”

Vanessa found her flair while studying at NWRC in Derry. She gained a wide range of nail tech, hair and beauty qualifications before setting out on her own and building a loyal client base. She has since returned to the college as a lecturer in nail courses.

“Never did I think 6 years later I’d be able to say I got Nail Salon of the Year at the Irish Hair and Beauty Awards,” she said.

“Starting out in this industry, it’s something I’d never thought I’d achieve but it’s what I always dreamed of, I’m just so thankful for all of the support and loyalty from all my family, friends and clients,” Vanessa said.