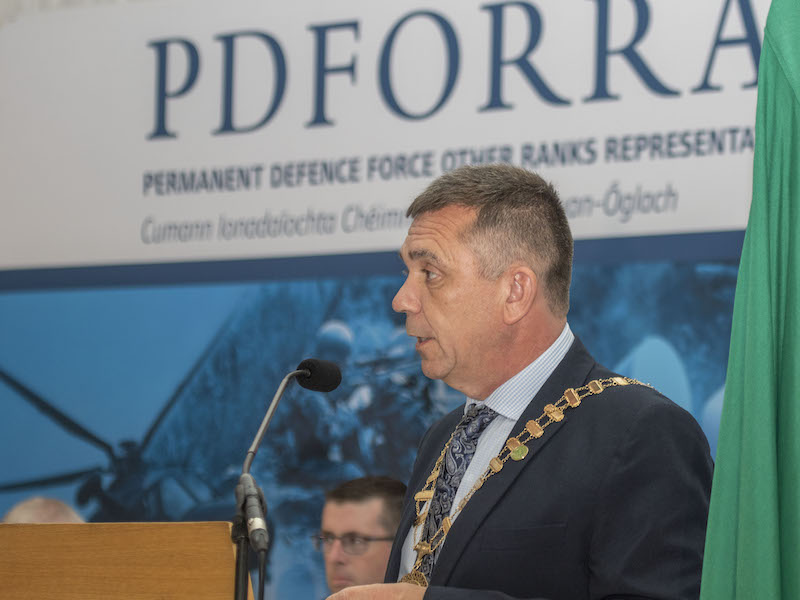 The Irish Defence Forces is on track to witness the greatest ever exodus of its members, the annual PDFORRA conference has been told.

While the Government’s White Paper on Defence has an agreed strength of 9,500 members in the army, air corps and naval service, that actual number is now 8,146 and falling.

The situation was outlined by President of PDFORRA, Mark Keane in his address to the conference at Jackson’s Hotel in Ballybofey yesterday.

Hundreds of delegates gathered at the Donegal hotel for the three day conference.

Mr Keane said “The current strength is 8,200 – this would not be acceptable across the Public Sector or any other uniform services within the State. Naturally enough this is crushing on moral.

“Indeed, it’s fair to say that every Formation, Corps and Unit are critically below strength.

“Throughout the current year we have continued to highlight the glaring gaps, previously referred to as ‘pinch points’, in skills and trades that are appearing across the Defence Forces, and, naturally enough, are having a detrimental effect on retention and recruitment.

“I know that all of us present here today are acutely aware of the great strain these place upon our members and their families. Those who are still serving are being asked yet again to do more with less.

“In the last few days we have again seen the launch of yet another recruitment campaign. Minister, you are not going to recruit your way out of this.

“Whilst this had previously been triumphed as a solution to the ongoing crisis – surely now it must be accepted that this is a completely failed strategy, it’s akin to moving the deck chairs on the Titanic.”

Falling numbers, conditions and rates of pay once again dominated this the 30th annual PDFORRA conference.

President Keane added that PDFORRA have been reasonable and responsible in calling for proper recruitment/retention/ remuneration measures to be enacted to stem the tide.

He said it is clearly evident that the Defence Forces are failing to match the numbers of those leaving, it’s time to invest properly in the people remaining in service. 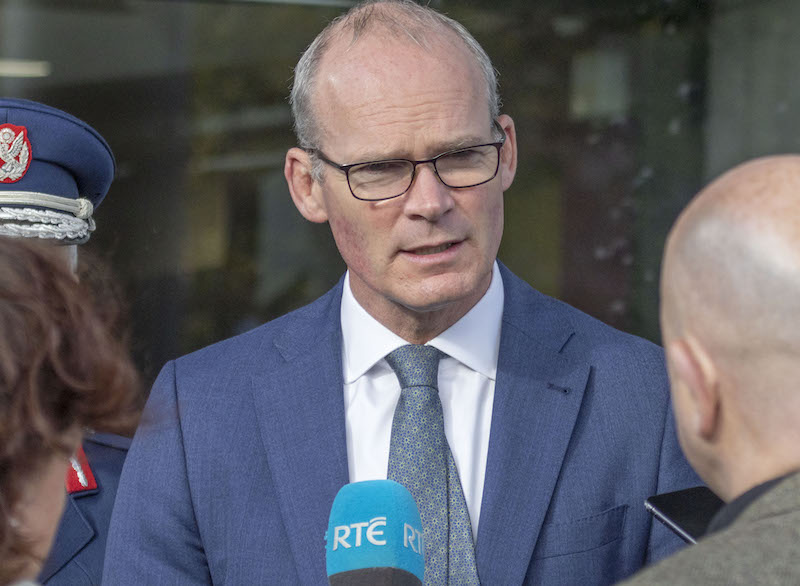 Minister for Defence, Simon Coveney, TD speaking to the media when he attended the PDFORRA conference in Ballybofey. (NW Newspix)

President Keane, who serves as a chef within the naval service, said that a proposal to invest in new equipment must go “hand in hand” with investment in defence force personnel.

“As I have stated previously all modern equipment is made redundant without the skilled personnel to operate it!

“In fact, we have now witnessed Oglaigh na hEireann at its lowest numbers since the formation of the state, well below even the Government’s own recommendations and particularly worrying when you consider the security situation currently ongoing in the world today.”

Speaking at the conference Minister for Defence, Simon Coveney addressed a number of issues including staffing levels, pay and the daily ration rate.

On the issue of pay the Minister said starting pay for a newly qualified three star private and their Naval Service equivalent will go from just over €30,000 to €34,798 per annum, with scope for further income from duty allowances.

He added that members of the Defence Forces have benefited from the current public service pay agreement and if ratified, this will guarantee a further increase in pay, and allowances in the nature of pay, of 6.5% over 2022 and 2023.

On the issue of the daily ration for food for members, Minister Coveney said this was to increase from €4.20 for three meals a day to €6.40, a 52% increase.

He also addressed the issue of staffing numbers which was mentioned specifically by PDFORRA President Mark Keane.

He said the reality was that staffing numbers in the Defence Forces needed to be at 11,500 by the year 2028.

Asked how he hoped to get to the number the Minister added “Better pay, better conditions, more investment in the defence forces, newer equipment. new ships, new aircraft, new army equipment as well.

“We will spend about €114 million more in defence next year than this year. That’s I think the biggest ever increase in defence spending since the State was established and there’s a lot more to come given the decision we have linked to the Government decision on the commission.

‘These aren’t insubstantial changes and so what I am saying to people is that we are investing in defence and most importantly we are investing in people because we want young people to choose a career in uniform because it’s exciting, it’s adventurous and it’s also modern and safe and it has career progression.

“It’s a fascinating career but it needs investment and we’re going to build a bigger, stronger and more content defence forces that has significantly more capacity than is currently in place today.

“We have seen substantial change but there’s a lot more to come,” he said.

“From my perspective, if there was one positive to be taken out of an extremely difficult and continuing national crisis, it is the heightened awareness that members of the general public have concerning the societal value that a competent and capable Defence Forces delivers for local communities and the State,” he said.

Meanwhile, the General Secretary of PDFORRA, Gerard Guinan, said that rates of pay and conditions continue to be the main talking points and grievances among its members.

He said “Pay, working time, or as referenced in the Commission’s report, labour hours budget, Long Service Increments and allowances are all matters that must be front-loaded if we are to instil confidence in members that this is not just another report whose finding are to just gather dust.

“Moreover, it must be considered that while the Commission on the Future of the Defence Forces was empowered to look at pay structures, it was not placed in a position to look at pay rates generally.

“And, while PDFORRA welcomes the recommendations, amongst other things, to eliminate the extended pay ledge that had existed for new entrants, the adequacy of pay rates was not looked at and has not been looked at since the Gleeson Commission reported many, many years ago.”