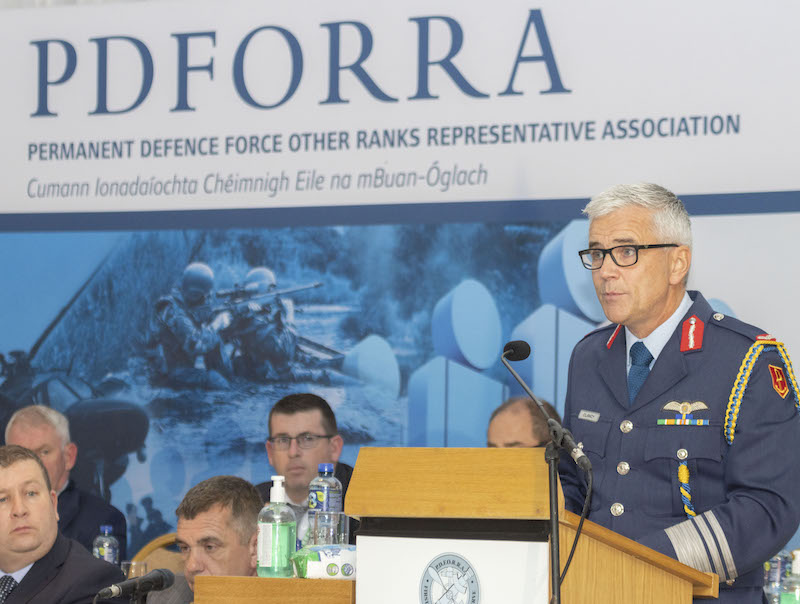 The Chief of Staff of the Defence Forces has admitted that discrimination including sexual harassment against female members still exists today.

Lieutenant General Sean Clancy was speaking as he addressed members of PDFORRA during their annual conference in Ballybofey.

But Lieutenant General Clancy vowed to continue to break down those barriers and ensure women are not discriminated against as the Defence Forces evolves.

He referred specifically to last year’s RTE television documentary Women of Honour which detailed sexual assault and harassment by male colleagues and superiors, and job discrimination against female members with children.

He said “I intend to give you an update on those actions and to once again reaffirm my commitment to continue to be a champion of enduring progressive change and to implement positive organisational culture that is aligned with the values of Óglaigh Na hÉireann.”

He revealed how, as a result of the documentary’s findings, he established Organisational Culture Standing Committee (OSCE).

As part of that committee over 6,000 Defence Force personnel have received a briefing on the concerns and initiatives planned by the force.

A new module of Sexual Ethics and Respectful Relationship Training is now being compiled.

“This training module is deliberately intended to evoke a conversation across the organisation, which aims to change attitudes and behaviour for the benefit of all our personnel.

“This continuing education and conversation is critical for us if we are going to commit to positive cultural change for the benefit of all serving proudly in the Defence Forces.”

Lieutenant General Clancy admitted that the experiences of some female members are not all in the past.

He added “Unfortunately, I am now more convinced than ever that many of the distressing and unacceptable service experiences that have been experienced by your members are not merely confined to history.

And he called on all members of the Defence Forces who know of such discrimination to come forward.

“Instead they point to the lived and current experience of too many of our personnel. This is further borne out by the findings of the recent Defence Forces Baseline survey, which points to clear and present issues regarding unacceptable and unethical behaviours in the organisation.

“Once again, I am calling on every member of the Defence Forces to be proactive in preventing any type of unacceptable behaviour that is not in keeping with our standards, procedures or, most importantly, our ethos and values.”