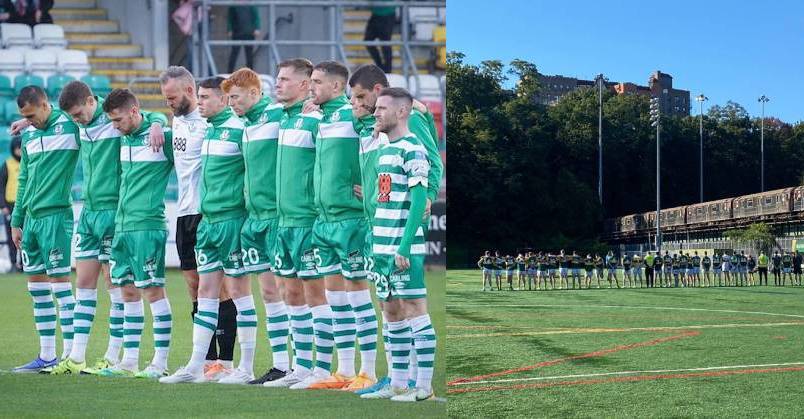 Sporting events across the country and the world remembered those who fell victim to the Creeslough explosion on Friday.

As a sign of respect, all sporting events in the county were postponed at the weekend, but there was plenty of respect shown outside of the county and outside of Ireland.

In Tallaght yesterday, Shamrock Rovers and Shelbourne observed a minutes silence in memory of those who lost their lives in the tragedy.

The silence was observed impeccably inside Tallaght Stadium by players, staff and fans of both sides who paid tribute to the 10 victims.

Donegal GFC in New York, who welcomed Convoy over in June of this year, had a minutes silence before their game with New York GAA yesterday in the county final.

10 candles were also lit to commemorate the victims.

At the New York county final today they had 10 candles for each of the victims in Cresslough. Let’s keep them in our prayers. 🙏🏻🕯 pic.twitter.com/FiEULp8Yk2

A minute’s silence was observed before the senior finals of the #AsianGaelicGames this afternoon, in memory of the late Brian Mullins, and for the people of Creeslough, Co Donegal pic.twitter.com/bOnzY3WmBb

Ireland’s Women’s national team (with Donegal natives Amber Barrett, Ciara Grant and Roma McLaughlin in the squad) held one at training in preparation for their World Cup play-off:

A moment’s silence for the Creeslough community ahead of WNT training 🙏#WeAreOne pic.twitter.com/V5IwQeqWZY

Ulster vs Ospreys at Kinsgpan Stadium in Belfast:

A minute silence impeccably observed before @DrCrokesGAA v @DingleGAA tonight in the @Kerry_Official County Quarter Final, to pay respect to the community of Creeslough, Donegal and the terrible last 24 hours in North Donegal. Top class by the GAA as always pic.twitter.com/7F6vndXpc8

A minute’s silence for the victims of the Creeslough tragedy impeccably observed before the @AontroimGAA final at Corrigan Park. pic.twitter.com/D91g1d8XTD

Leinster vs Cell C Sharks, Rugby Championship at The RDS:

Minute’s silence at the RDS for victims of Creeslough tragedy. pic.twitter.com/tCkfKZF2PN