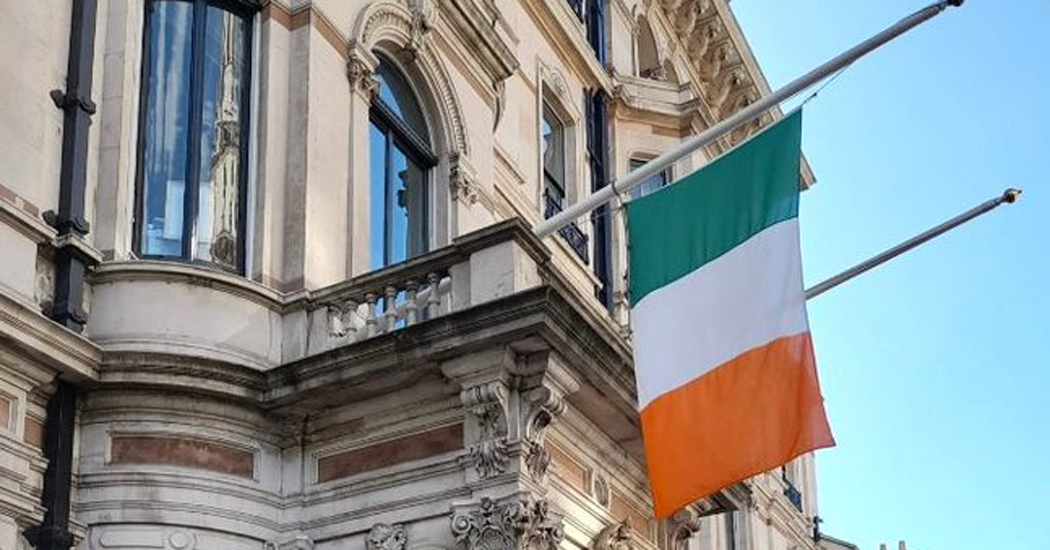 Irish flags are being flown at half-mast at all Irish embassies around the world today as a symbol of sympathy and solidarity with the community of Creeslough.

From Dublin to Beijing, from Australia to the Holy See, the tragedy of Creeslough is being remembered by the Irish diaspora everywhere.

Government Buildings in Dublin have also joined the global symbol of sympathy today, while inside, government and party leaders made expressions of sympathy to the Creeslough community this afternoon.

The names of the deceased were read out to the Daíl by Taoiseach Micheal Martin.

“Fathers and mothers, sons and daughters, brothers and sisters, each one an enormous, incalculable loss in the lives of those around them,” the Taoiseach said.

“This is a community bereft , a close-knit people in deep sadness and mourning, devastated by what has happened. But it’s also a community of great strength and resilience, pulling together to support each other through this terrible time.”

The Irish flag is flying at half-mast from the Embassy today and for the coming days, as a mark of respect for those who tragically lost their lives in #Creeslough

May they rest in peace. Ar dheis Dé go raibh a h-anamacha pic.twitter.com/O1FQ7YJ1y5

The 🇮🇪 flag flies at half-mast at the Embassy, as a mark of respect for those who tragically lost their lives in Creeslough. Our deepest sympathies are with their families, and the whole community.

The Polish flag flies at half-mast in memory of those who tragically lost their lives in Creeslough, Co Donegal. Our thoughts and prayers go out to all those affected.#Creeslough @PresidentIRL @MichealMartinTD @simoncoveney @IrlEmbWarsaw @dfatirl pic.twitter.com/pSHqoGIM0S

The Irish flag flies at half-mast at the Embassy today, as a mark of respect for those who tragically lost their lives in Creeslough. Our deepest sympathies are with their families, and the whole community.

Flying our flag at half mast to mark our solidarity with the victims and families of Creeslough. Every year of my life I have visited Donegal, our neighbouring county, our hearts are broken by this tragedy. @IrlEmbBrazil @AmbSeanHoy pic.twitter.com/ZVA89rYGSN

Today and for the coming days our 🇮🇪 flag will remain at half mast in Hanoi in sympathy with the community of Creeslough, Co. Donegal.

Our thoughts are with the victims, and their families and friends at this difficult time.

The Embassy flag flies at half mast in memory of the victims of the #Creeslough tragedy. Our deepest sympathies and condolences to all those who have suffered such a devastating loss. pic.twitter.com/hz9hSpuoZT

Flags fly at half mast around the world in sympathy for Creeslough was last modified: October 11th, 2022 by Rachel McLaughlin
FacebookTweetLinkedInPrint