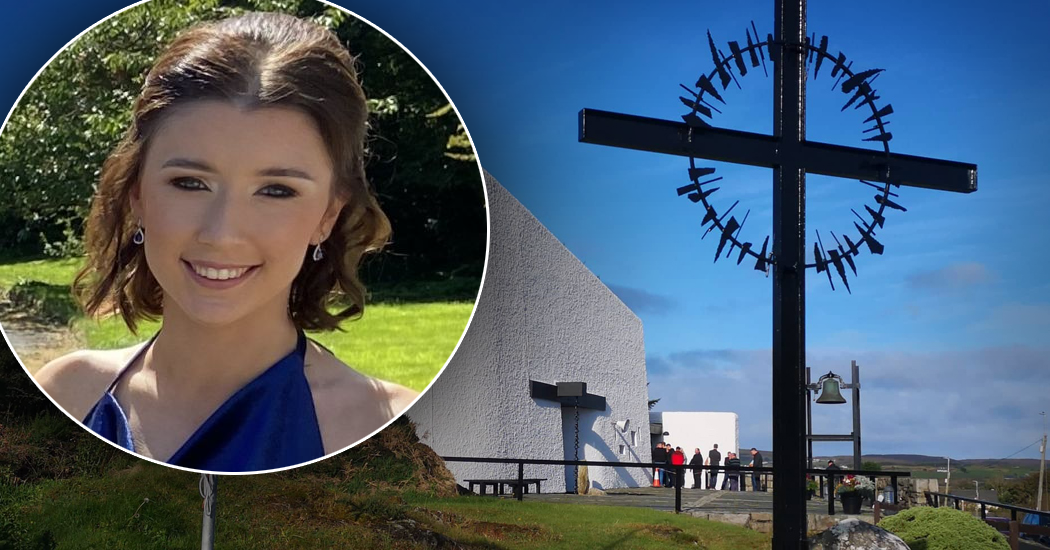 A huge heaviness hung over the village of Creeslough today as it prepared to bury the first of the victims of the Applegreen Service Station tragedy – beautiful Jessica Gallagher.

It has been a long few days for the village and it will feel a lot longer as residents gathered to brave the first of ten funerals in the coming days.

Hundreds of mourners gathered in silence at St Michael’s Church to say a tearful farewell to the young fashion designer who was due to start a new position in Belfast yesterday.

Instead of taking another step in her career, the 24-year-old’s family were preparing to lay her to rest.

Jessica died in the unforgiving rubble of the tragedy which ripped the heart from the village just after 3.15pm.

She was there to visit her boyfriend Conor who lived in the apartments above the shop and who is still in a critical condition in hospital.

Mourners filed into the church designed by renowned architect Liam McCormick as early as an hour before the service.

On the stroke of 11am Jessica’s heartbroken family accompanied her wicker coffin into the church.

A picture of the beautiful and bubbly young woman was placed upon her coffin beside a generous wreath of flowers.

A shirt which was one of her first commissions and which the young designer was still working on when her young life was so brutally cut short was also beside her coffin.

Father Duffy was joined on the altar but a number of other priests as well as by the Bishop of Raphoe, Alan McGuckian.

Fr Duffy said “Jessica radiated a warm and positive feeling on those who knew her best.

“Everyone who knew Jessica knew that radiant smile, that would light up a room with that infectious warmth that flowed from her. She always brought that sun, whether things we happy or difficult.”

Sincere sympathies were paid to Jessica’s parents, Anthony and Bernie, her sisters Shauna Marie and Lisa, and to Lisa’s husband Enda.

The Funeral Mass prayed for Jessica’s boyfriend Conor McFadden, who is recovering from serious injuries he sustained in the blast. Conor thought the world of Jessica, Fr Duffy said.

To her father Anthony, Jessica was one of three precious jewels, to her family and friends, she was loved dearly as a source of love, affection, kindness and warmth.

Fr Duffy described Jessica as a young woman who was bursting with energy and imagination, a practical joker and an animal lover.

“Despite her slender stature, she was very strong in her opinions and her own self-belief. “In her determination, in her confidence, she was unstoppable.”

Jessica was incredibly hard-working as she strived towards her goal to be a top fashion designer, Fr Duffy said.

She came to note while studying fashion in Paris and was soon given a place to study further in Shanghai. After her time in China, she was delighted to get back to the quiet landscape of Creeslough, but the kindness she carried on her travels had earned her friendships all over the world.

“It was only the start of greater things to come,” Fr Duffy said.

“She had that creativity which came to get so easily. As a child she painted a brilliant amount of Christmas cards with moonlight scenes of Muckish she could see so clearly from her home, they were cherished by everyone who received them,” Fr Duffy said.

“No matter where she travelled she loved her beautiful family and her home best.

“It was in that home she first received love. She used Donegal tweed in her designs which helped her to get to Paris and it always remained a feature in her designs.”

Sympathies have been sent to Creeslough from all over the world, Fr Duffy said, including the Vatican.
He shared a message from Downing’s priest Fr Eamonn McLaughlin now based in Rome, who said that Pope Francis told him he was personally heartbroken by the sad loss of lives and the lives so young in the Creeslough tragedy.

“Pope Francis wants to personally reassure you as a family of his prayers, and all the families of this community. He wants us to know you all are in his thoughts and prayers,” Fr Duffy said.

Speaking to the heartbroken Creeslough community, Fr Duffy said that community and faith will help everyone in the pathway of life ahead.

“Our hearts are heavy but our spirits are strong,” he said.

“It is together that we will make the journey going forward, supporting each other.”

Dr Duffy thanked the people around the world who have sent solidarity to his grieving community.

“We are heartened this morning in our sadness of that rallying of support from the very first moment of this terrible accident.”

A special word of thanks was also issued on behalf of Jessica’s family in the aftermath of the explosion, with Fr Duffy adding: “The family want to thank the volunteers who came to the aid of Jessica, your help at the beginning was so very pivotal.”

Jessica’s heartbroken family then accompanied her remains outside the church where they then walked approximately one kilometre to Doe Cemetery where she was buried.

Many mourners walked behind Jessica’s funeral cortege to support her heartbroken family.

And many of the same mourners prepared to gather again for yet another funeral in the same church, that of Martin McGill who died alongside Jessica in last Friday’s horrific incident.

Heaviness hangs over Creeslough as first victim of tragedy is laid to rest was last modified: October 11th, 2022 by Staff Writer
FacebookTweetLinkedInPrint