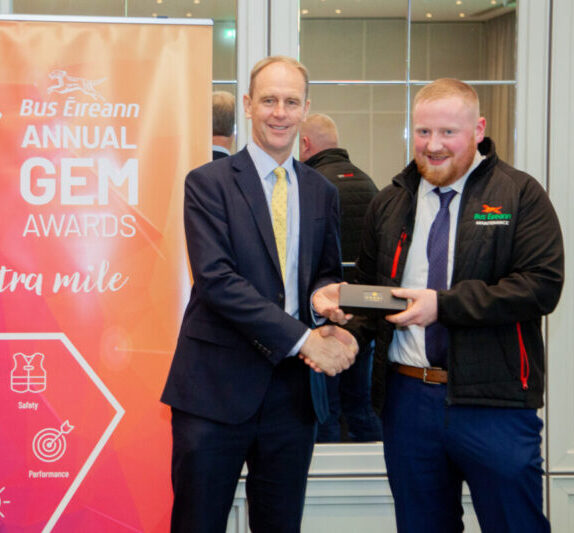 Local man is regional Bus Éireann ‘Apprentice of the Year’

A Lifford man has been crowned ‘Apprentice of the Year’ for the Western region at the Bus Éireann awards.

The national bus company celebrated its employees’ achievements in 2022 at the regional annual ‘Go the Extra Mile’ (GEM) ceremony.

Bus Éireann’s Donegal team was celebrated, with Martin Doherty from Lifford named Apprentice of the Year for the Western region.

Based in their Stranorlar depot, he was praised for his exceptional performance, talent and dedication to his role as apprentice with Bus Éireann.

‘’I am immensely proud of our team of committed and dedicated employees in the Western Region who ‘go the extra mile’ for our customers every day,” said Brian Connolly, Bus Éireann Senior Operations Manager, West.

“I would especially like to recognise Martin Doherty who has been awarded Apprentice of the Year specifically for his demonstration of Bus Éireann’s core values. We recognise his ongoing commitment to colleagues and customers alike.”

Martin will now go forward to the National GEM awards on the 8 December in Dublin.

Bus Éireann employs 80 people who live in County Donegal and transports 10,095 primary and post-primary students on school transport in Donegal each school day.