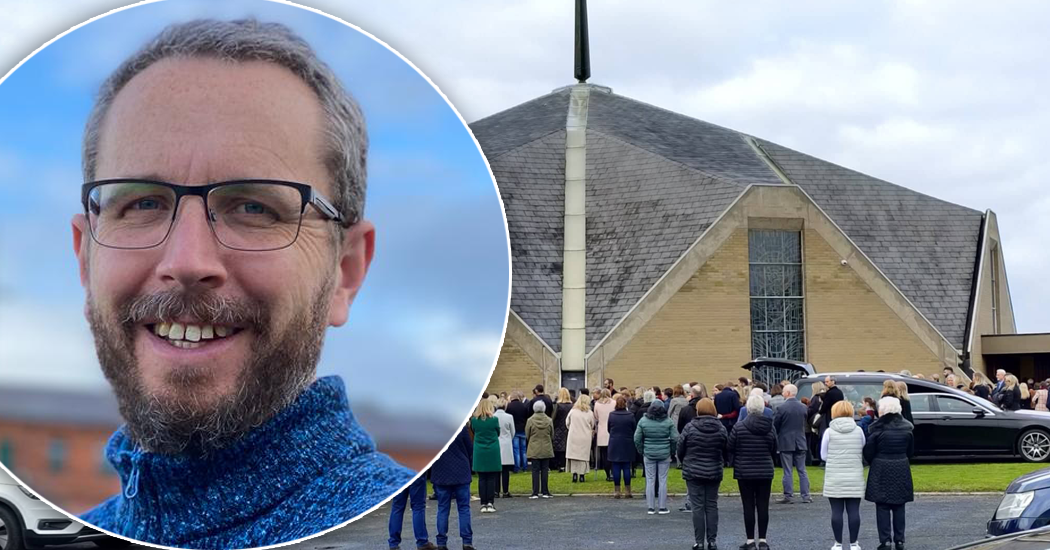 Heartbroken Hamish says goodbye to the most perfect of dads

A young boy who narrowly escaped the Creeslough explosion today paid tribute to the dad he lost in the same horrific tragedy.

Brave Hamish O’Flaherty said dad James (48) was the best father a boy could have wished for.

Tears flowed amongst the many mourners who gathered at St Mary’s Church in Derrybeg as the third person from the dark day was buried.

Hamish, aged 12, carried his father’s wooden cross into the church and then bravely spoke to the large crowd to pay tribute to his father and his many special qualities.

“He was a great man, he worked very hard and very long each day whether around the house or at work,” Hamish said.

“He had no shame, which I think is a great thing to not have.”

“He wore a jacket with a huge paint stain on the side of it everywhere, he managed this by leaning on a wall which was still wet with paint.”

Young Hamish was also at the Applegreen service station when the fatal events unfolded last Friday. He was sitting in his father’s car in the forecourt, waiting on his dad in the shop, when the tragedy occurred.

The events of the past week, Hamish said, have taught him to cherish life after losing his beloved dad James, who was originally from Sydney in Australia.

“We should be grateful for your families. Cherish them. Be grateful because they won’t be there forever so use up the time you have wisely,” Hamish said.

“Be grateful for your own life, because that too will not last forever, For you will be able to rest after your hard work.

The Faugher NS student issued his thanks to the emergency services who were in action during the Creeslough catastrophe which took his father’s life.

James O’Flaherty’s family was at the centre of his life, Fr Brian Ó’Fearraigh told the congregation.

James was a man who would shower his wife Tracey and their son Hamish with kisses and hugs every day.

“James lived for Hamish and Tracey, he was fully committed to both of you and you were inseparable as a family,” Fr Ó’Fearraigh said.

In their time of heartache, Fr Ó’Fearraigh reminded Tracey and Hamish how dearly loved they were by James. He showed his love by sharing memories and experiences with them.

Those experiences included family holidays and reading to Hamish every night. The book that the father and son were reading before Friday’s tragedy was Roald Dahl’s ‘Flying Solo’. This was one of the gifts offered during the Mass as a symbol of James’ special times with Hamish. Other gifts were a family photograph and a bar of chocolate, representing James’ signature sweet tooth.

Originally from Sydney, James moved to Donegal after meeting the love of his life, Tracey, in Paris.

The family lived in Dunfanaghy, a beautiful part of Donegal overlooking the waves of the Atlantic.

James was an accomplished engineering director with the US-based company Jabil.

He was a “powerhouse”, Fr Ó’Fearraigh said, and he was a “caring work colleague and a dear friend to many.”

Outside of work, James loved to take care of the house, go-karting, cycling, music and languages.

He adored his cat Spencer, and the Mass heard that his relationship with the family’s new dog Murphy was a work in progress.

Fr Ó’Fearraigh told James’ family that their precious memories and stories about James will keep him in their lives. He likened their grief to a Lego puzzle, as James and Hamish had visited Legoland together just two months ago.

“When you open a large box of lego, at the beginning it feels overwhelming and it looks like an impossible task,” Fr Ó’Fearraigh said.

“What you are going through now, Tracey and Hamish and family, now feels overwhelming. This grief and sadness and questions. It looks like an impossible task ahead.

“But also a void in your lives, a caring husband a loving father not there anymore.

“The Lego box gives us instructions, if we follow those they lead us to success.

Fr Ó’Fearraigh told mourners: “We have all experienced, since Friday afternoon, that grief knows no boundaries, the tragic event and the effects of the Creeslough catastrophe that is beyond comprehension. The awfulness of the tragedy has reverberated near and far, way beyond the shores of this country of ours.”

Fr Ó’Fearraigh said he hoped the support and community spirit that emerged in the wake of the tragedy would be a strength and consolation to James’ family.

“We are all with you, we support you. As the famous line says: ‘Our hearts are like our mountains in the hills of Donegal’.”

President Michael D Higgins was among the mourners at this morning’s mass, alongside, aide-de-camp to An Taoiseach Micheal Martin, Commandant Claire Mortimer.

James again led his father’s funeral out of the hushed church as James was led on his last journey.