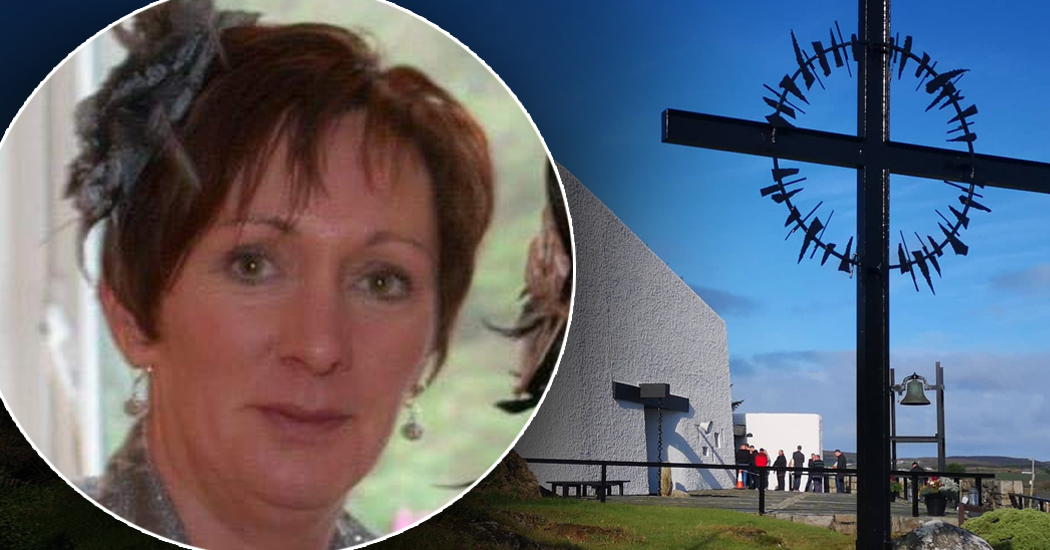 Martina Martin was the ultimate “Mammy Bear’ who put all others before herself, her funeral mass heard today.

The much-loved mum-of-four, who was aged 49 and originally from Letterkenny, radiated love, a sense of fun and lived for her family, Fr John Joe Duffy told mourners at St Michael’s Church today.

He said Martina spent much of her own life preparing her own children for their lives and going out into the world saying she was the ultimate “mammy bear.”

“Real life requires hard work and plenty of patience. It requires doing up rotas on a board in the kitchen of the house telling you, the children, what your tasks are including emptying the bins, which I’m sure you did without fail

“Real love, for her, was a way of life. Her quick wit, her straight talking, it was done with love and with goodness,” he said.

He added “Putting out the bins, washing the dishes, which I’m sure great care was given to, and taking Dusty, Sophie and Junior for a walk.

“Dusty being the dog and Sophie and Junior being the cats. She offered you that love, that love in helping you prepare for the realities of life, and she did it so very well.

Martina was also described as a “loyal sister” who always had her siblings’ backs.

She would always be the one leading the fun on a night out with friends and if anything went wrong she would tell friends to ‘build a bridge and get over it.’

She was rarely seen without a coffee in her hand with a coffee cup being one of the offertory gifts brought to the altar.

Another gift was a family picture which spoke for itself and also a Harry Potter pillow of which she was a huge fan and a box of Black Magic chocolates for her love of dark chocolate.

Fr Duffy said when he first met Martina that he was wearing a large jumper and she did not realise he was a priest but called him by his Christian name, John Joe.

However, when she soon discovered he was a priest she asked would she call him Father but he insisted she stick with just John Joe, he revealed.

But he added that in was in that very shop where she showed so much love for people was where everything changed in seconds.

And he added simply that Martina was a beautiful person but she never minced her words.

“Martina was a beautiful person. Her beauty inside radiated in a kind of cheeky, mischievous smile that flowed out to you when you met her.

“She was the voice of reason when others were hurting. She entered into the situation, she was a straight talker and never minced her words.

“The kindest friend you could ever have and the life and soul of any night out. She didn’t dwell on a problem she was facing in any way of her own situations of life, she put others first.”

And he told her four children who were comforted by Derek, their dad and Martina’s husband “She protected you and she kept you safe and taught you right from wrong. She was preparing you for life.

“She is very proud of each one of the four of you. She will continue to be proud of each of you and your achievements, and she would want you to do and achieve the very best in life for yourself.

“You were blessed to have the best mother who loved you so dearly and cared for you so much.

“She believed in you and wanted you to be happy.

“She lived for you, her children. She never missed a birthday and loved to meet for a coffee to catch up.”

“If we were having a bad day, the quick wit would lift us up. She cared for the customers in another way.

Mourners also heard it was people like Martina who stood on the front line and help others when the Covid 19 pandemic struck.

Fr Duffy said: “Martina was a front-line person in this community. We have, all of us, as a world struggled through Covid, but she was one of the people on the front line serving our community with her colleagues through that tough time.

“Giving us such tremendous service through that time. The only place opened, when even this church was closed, was the shop and she was there with her colleagues on the front-line being a place of comfort and consolation for us.”

Once again President Michael D Higgins was among the mourners at this afternoon’s mass, alongside aide-de-camp Colonel Stephen Howard, aide-de-camp to An Taoiseach Micheal Martin, Commandant Claire Mortimer.

Also present was Principal of Mulroy College, Fiona Temple and a number of pupils and representatives from the ETB.

Again Donegal Minister Charlie McConalogue representing the government, and many other public representatives, alongside representatives of An Garda Siochana and emergency and rescue services and healthcare staff from the Republic and Northern Ireland.

Martina’s funeral cortege left the church where a huge crowd lined the streets of Creeslough once again to show their respects to one of their own.

Martina will be cremated at a family ceremony this afternoon.