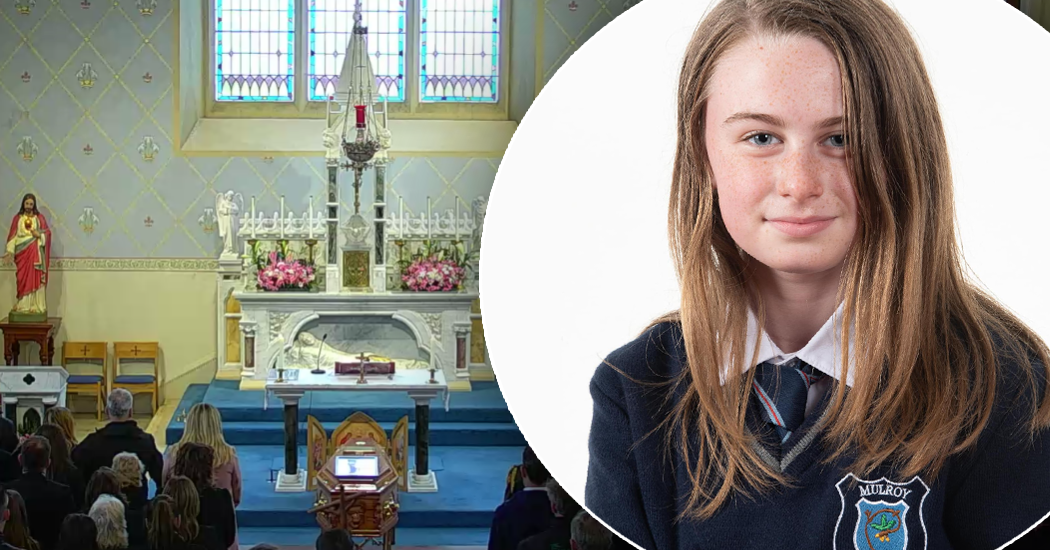 Leona Harper, a little lady with a big heart, is laid to rest

Leona Harper may have lived a little life, but she lived a very full life, her Funeral Mass heard today.

She was a feisty teenager, a big-hearted sister and a deeply caring friend. To her parents Hugh and Donna, she was a little miracle.

Leona’s short but packed life of friendships and achievements was celebrated at this afternoon’s Funeral Mass in St. Mary’s Ramelton. It was in that church that she was baptised, that she made her first Holy Communion and her First Confirmation just three years ago.

Leona was one of the youngest victims of the Creeslough tragedy on Friday last. She had been choosing ice-cream before a sleepover she was looking forward to attending at her friend’s house when the devastating explosion occurred.

Hugh and Donna Harper talk of their daughter as a little miracle because after the birth of their first son, Anthony, Donna was told there was no prospect of her conceiving another child.

“Given how unexpected and welcome Leona was, your little daughter was indeed a precious gem,” Fr Carney said.

“Gems shine, gems sparkle and gems attract us. Leona shined brightly, Leona sparkled with energy and fun and attracted so many friends to her circle.”

At home, Leona’s brothers were a very special part of her life. Her protective big brother Anthony was always there for her, while she and her younger brother Jamie were seen as a unit wherever they went.

Leona has left memories of love and kindness in her school communities too, Fr Carney said.

At Scoil Mhuire Ramelton she was a lovely little girl, pleasant, quiet and self-effacing. Two years ago she became a “young lady of promise” as she started post-primary school at Mulroy College in Milford. Fr Carney stated the sad reality that Leona was facing into her Junior Cert year and looking at the horizon and careers ahead of her when her life was cut short.

Fr Carney called on Leona’s grieving friends to look out for each other and honour the care and friendship that Leona had for them.

“Leona’s life was short and brief but, my goodness, was it packed to the brimming,” Fr Carney said.

“Leona brightened her world with a gentle but feisty character, her personality and her distinctive array of talents and interests.

“She brought her own unique qualities to the lives of those she loved, lived and laughed with.

“Her principal and teachers talk of a happy girl who radiated love and kindness and appreciated everything school gave her. Her school stoked her ambition and she grabbed all the opportunities that were there,” Fr Carney said.

Leona was no shrinking violet either, mourners heard.

“She had a lovely level of independence, she could speak her mind and speak for others. She stood up for those who could not stand up for themselves. She had a maturity beyond her years.”

Leona’s wide circle of friends, classmates, teammates, coaches and mentors were represented at the Funeral Mass today. She was a gifted player with the Letterkenny Rugby Club, she was branching into boxing and she joined her father Hugh in supporting Liverpool FC. She loved dance, hair and fashion, but her more surprising pursuits were her love of the outdoors, fishing, hunting and agriculture.

She had a passion for tractors, and for that reason, two bright red tractors and members of the Donegal Car Club led the cortège from Leona’s home at Mountain Top to Ramelton, before softly rumbling their way onwards to Termon, where a guard of honour was formed to guide Leona’s final journey to Termon graveyard.

As the waves of shock and sadness continue to grip Donegal following the Creeslough tragedy, Fr Carney read out a word of thanks to the emergency services and all who helped the community during and after the explosion that took the lives of 10 beloved people.

Leona was the last victim to be recovered from the rubble, and today’s funeral Mass heard a special word of thanks given, on behalf of her grieving mother Donna, to the digger driver who worked through the night to bring her little miracle back into her arms.

Leona Harper, a little lady with a big heart, is laid to rest was last modified: October 14th, 2022 by Rachel McLaughlin
FacebookTweetLinkedInPrint