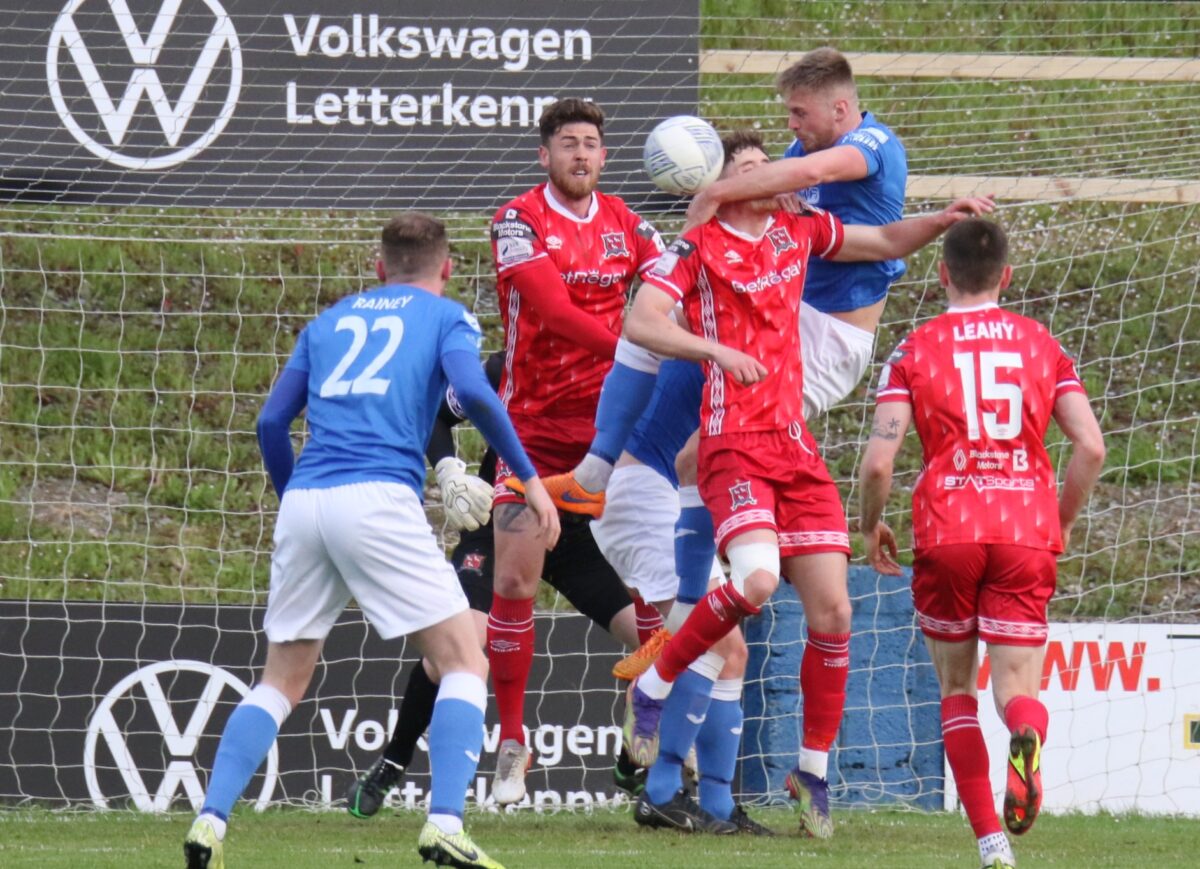 Finn Harps were unable to mount a late comeback against Dundalk as they lost 2-1 at Finn Park in the Premier Division.

First half goals from Dundalk had them on their way to victory when Lewis Macari found the back of the net after a free kick was whipped into the box, while Rob Slevin turned into his own net just before half-time.

Substitute Rob Jones found the net with a header to make it 2-1 in the 86th minute but, despite late pressure from the Harps, Dundalk held on.

Ollie Horgan made two changes from last weeks 3-0 loss to Derry in the Brandywell, with Élie-Gaël N’Zeyi returning from injury, and Jaime Siaj coming in, for Filip Mihaljević and José Carrillo.

Dundalk make three changes from their 2-1 loss to St. Pat’s as Lewis Macari, Runar Hauge and David McMillan come in for the injured Steven Bradley and Greg Sloggett, with John Martin on the bench.

The game was preceded by a powerful and emotional tribute to those who lost their lives in the Creeslough Tragedy, with LOI director Mark Scanlon, former Finn Harps man Tom Mohan, and Dundalk captain Andy Boyle brought out wreaths in remembrance, while the Ballybofey United under-10 team held candles on the centre.

A minutes silence was observed impeccably by the crowd, with President Michael D. Higgins also in attendance, as Harps started brightly.

A quick couple of passes from Siaj to McNamee saw Dylan Duncan race through on goal. The Englishman turned inside and out before unleashing a shot into the far corner but Nathan Sheppard got a brilliant hand to take it out for a corner.

That would be the best it got for Finn Harps in the first half though, as Dundalk began to dominate.

A couple of crosses threatened as Gary Boylan almost headed into his own net, and Andy Boyle got up highest from a corner, but McKeown saved.

John Mountney’s deliveries threatened the Harps defence, and when one was cleared to Alfie Lewis, his strike from 25 yards fizzed off the post.

Another Mountney free-kick found Sam Bone who got a touch to Lewis Macari and his flick found its way into the top corner over the head of Barry McNamee on the line.

A Darragh Leahy header was well saved by McKeown and when Ryan O’Kane raced through, a last ditch tackle from Rob Slevin saved the day, while Harps’ only half chance came through a Siaj header which went over.

And Harps would be hit with a sucker punch just before half-time as a ball down the left found O’Kane, with David McMillan getting a touch on his cross. McKeown saved well but Slevin’s clearance was put into his own net as McMillan put pressure on.

Harps began the second half full of energy and tested the Lilywhites defence, with Leahy clearing off the line from a Donelon cross.

But that Harps spell came to an end as Dundalk took the sting out of the game for 10 minutes as they looked to see out the game.

But things came back to life when Lewis played in O’Kane who placed the ball under McKeown and into the net, but he was offside by inches.

At the other end then McNamee’s cross was low to sub Rob Jones who was on his hands and knees trying to head the ball in, and his flick went whiskers wide of the far post with Sheppard stranded.

Into the final ten minutes a great ball in from Donelon found Slevin who headed inches wide, but he was offside by a fraction.

Another Donelon cross to the back post was headed by Boylan and Sheppard got to the ball before Jones but only cleared to Mihaljević, with the Croatian’s strike deflecting out for a corner.

A great ball in from Boylan found Jones at the back post and he found the net on 86 minutes, with Harps piling on the pressure for the final five minutes of normal time at 2-1.

As Harps put the numbers up front, John Martin had a 1-on-1 saved by McKeown in stoppage time.

And the Louth side managed the game well to run down the clock late on and hold on for a deserved three points.

Harps stay 9th as UCD don’t play until next Friday when they take on Drogheda United at the UCD Bowl.