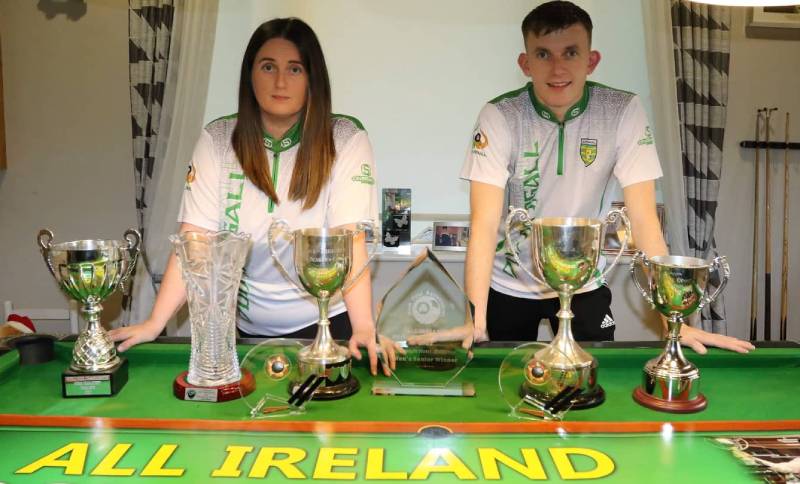 If you happen to find yourself in Owenie’s Bar in Dungloe looking for a friendly game of pool, you could well be faced with some challenges.

Firstly, the tables are almost always busy – this is a proper pool pub; secondly, there’s a decent chance you could end up playing an All-Ireland singles champion.

Indeed, you might end up facing two of them if your luck’s really not in. Siblings Helena Melly and Shaun Sharkey are a veritable tour de force when it comes to cue-sports in Ireland.

When the dust settled on the most recent All-Ireland Pool Championships held in May, Helena had achieved the remarkable status of back-to-back Irish Ladies’ Champion. Younger brother, Shaun, was not to be outdone, though, coming through a high-quality field of over one hundred of the best players in Ireland to finally land the toughest-won title in Irish Pool and earn the accolade of Irish Mens’ Champion for 2022.

Both players are busy getting the shoes polished and the waistcoats ironed as they prepare to head off to represent Ireland in the upcoming World Championships (19th – 27th Oct).

Though they’ve both represented their country on numerous occasions, the fact that the biggest event in the sport is being held in Ireland (Gleneagle Hotel, Killarney) for the first time ever adds an extra level of anticipation and excitement this time round.

Even though they’ve both excelled in the individual categories, both players actually prefer the buzz and camaraderie of the team events. They captained their respective Donegal teams to victory at last year’s All-Ireland’s. In a recent podcast interview with Tony McGettigan, Shaun made his preference very clear.

“When you win as a team, it’s so much bigger, so much better.

“Winning the All-Ireland with Donegal was always my main ambition. Winning that title last year was just the stuff of dreams. I don’t think that the feeling will ever be matched again no matter what I achieve.”

Maybe so. Or maybe a World title with Ireland in the coming days and another double celebration with Helena might just make Shaun reassess his view. Hopefully, we’ll get a chance to find out.